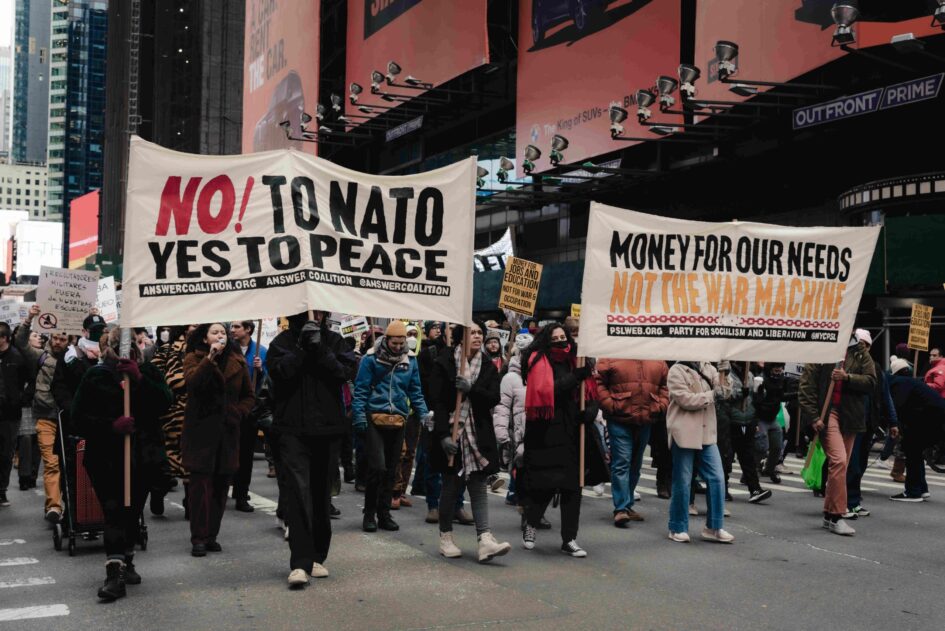 On Jan. 14, a large crowd gathered in Times Square in New York City to honor the true legacy of Dr. Martin Luther King, Jr. and demand an end to the brutal U.S.-NATO proxy war being waged in Ukraine. Throughout the rally, speakers emphasized how King organized against what he described as the “three evils” of society: militarism, racism, and poverty.

The march was organized by the ANSWER Coalition and The People’s Forum, and endorsed by CodePink, Veterans for Peace, the Party for Socialism and Liberation, United National Anti-War Coalition, Haiti Liberté, Rising Together, Peace in Ukraine Coalition, NYC-DSA Anti-War Working Group, Green Party of Connecticut, Massachusetts Peace Action, Samidoun Palestinian Prisoner Solidarity Network, and many others. A full listing of endorsers can be found here.

King once said of the Vietnam War, “The bombs in Vietnam explode at home—they destroy the dream and possibility for a decent America.” Speakers at the rally drew similar parallels to the billions of dollars of weaponry the United States funnels into the war in Ukraine—money which could be used for healthcare, housing, or deteriorating infrastructure at home.

“We are here honoring the legacy of Dr. Martin Luther King Jr.! We are here to reclaim his legacy and say no to war!”, exclaimed Claudia De La Cruz, Executive Director of The People’s Forum. “The majority do not own anything, while the U.S. military has $900 billion to spare on war! What moral authority does the United States of America have to go and intervene anywhere in the world? We have enough business to take care of here!”

Other organizers spoke on global struggles against the tyranny of the U.S. war machine, ranging from the struggle for Palestinian liberation under the yoke of the U.S.-backed apartheid state of Israel, to Haiti’s ongoing fight against imperialism since its successful slave revolt in 1804.

“Up with the people! Down with NATO!”

The mass demonstration proceeded to take the streets of Midtown Manhattan, with chants of “Up! Up! Up with the people! Down! Down! Down with NATO!” and finally ended at The People’s Forum, where organizers hosted a standing-room-only teach-in featuring Medea Benjamin of CodePink, João Pedro Stedile of the Landless Workers Movement of Brazil, and Eugene Puryear and Brian Becker of the ANSWER Coalition.

“We are fighting not only the war machine, not only the two war parties in Congress, but the entire mainstream media that is trying to convince the American people that this war is a good thing for us!” proclaimed Benjamin. “We are part of the global voices, including the majority of people in the global south that say ‘No to this war!”

During the panel discussion, organizers affirmed the urgency of building a new anti-war movement in the United States.

“Just like Vietnam, like Afghanistan, like Iraq, like every war, [the war in Ukraine] is a rich man’s war!” said Becker. “This is a war for Wall Street. This is a war for the military-industrial complex … We’re moving in the direction of a confrontation with Russia that will escalate … We have to be able to put this at the center of the agenda of all of the anti-war, anti-imperialist, and socialist organizations!”

Indeed, the geostrategic interests of NATO are opposite to the material interests of workers. As inflation soars and corporate profits swell, we see clearly that NATO’s brinkmanship only serves to enrich the ruling class at the expense of the vast majority of the global population. Honoring King means we must build a true anti-war movement for peace and justice. This must include using society’s vast resources to fund healthcare, housing, education, and saving the environment—not the U.S. war machine.

The season finale of the hit show ‘Proxy War’