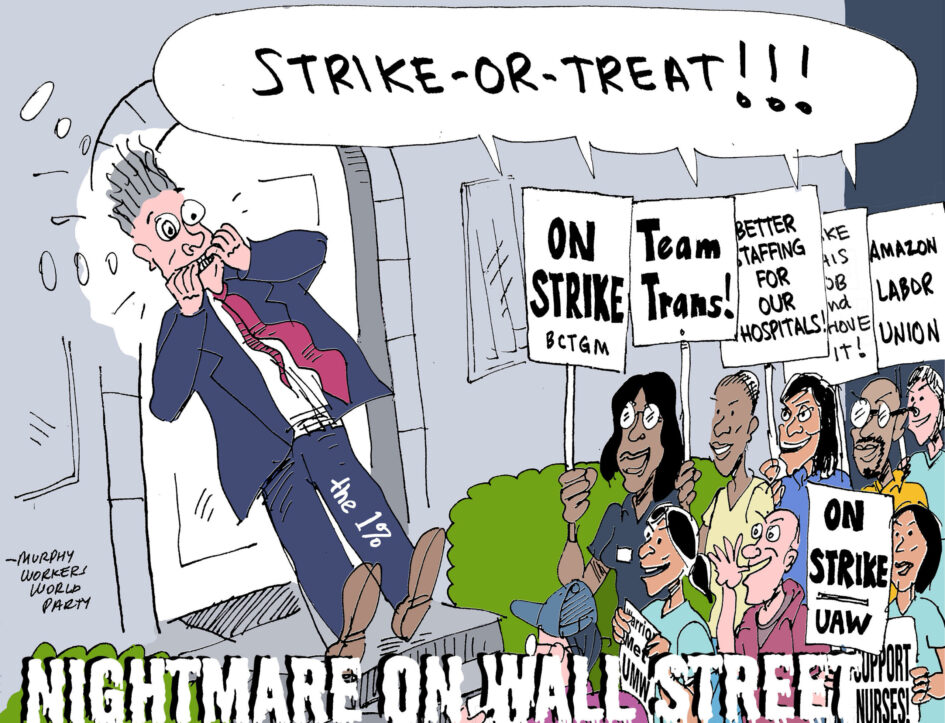 Every day workers continue to deal with COVID and the so-called “labor shortage.” 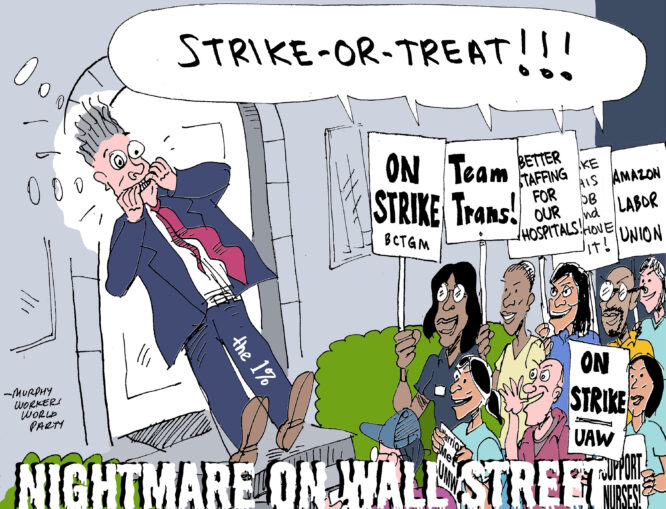 The struggle for safety on the job is the backdrop to the Oct. 21 shooting of cinematographer Halyna Hutchins. Her death on the “Rust” film set is another reminder of what every injured worker knows: that “accidental” workplace deaths and injuries are the result of overwork, cost cutting and deliberate neglect of basic safety by management. In this case management includes the star and producer of “Rust,” Alec Baldwin, who fired the fatal shot that also injured director Joel Souza. The role of assistant director David Halls who handed Baldwin the loaded prop gun is under investigation as well.

Hutchins’ death occurred during the struggle of film production workers for sufficient hours between shifts and for needed meal breaks, during recent months of 60-hour shifts on film sets. Workers on “Rust” were promised housing in Santa Fe, but the movie company broke that promise, and most of them were forced to drive 50 miles each way from Albuquerque to work 12-hour days.

Earlier on the morning of the fatal shooting, six camera crew members — represented by International Association of Stagehands and Theater Employees Local 480 — quit over a list of bad conditions, including a lack of gun safety, issues with housing and payment. (koat.com, Oct. 25) According to other “Rust” set workers, Baldwin called police to evict them as they were preparing to leave. Halls had been the subject of previous worker complaints over weapons and pyrotechnics safety, other safety matters and sexual harassment. 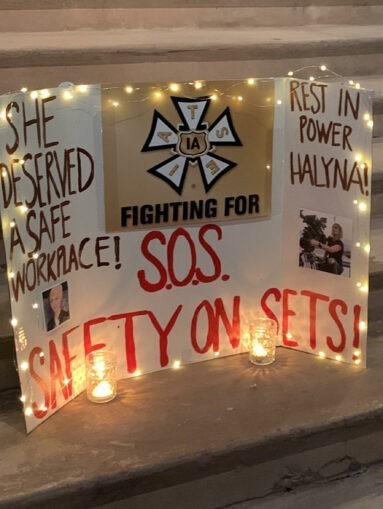 Some 400 members of International Association of Stagehands and Theater Employees Local 480 and International Cinematographers Guild Local 600 held a candlelight vigil for Halyna Hutchins in Albuquerque, Oct. 24.

Baldwin had called in a nonunion crew to replace the IATSE members at the time of the shooting. Hutchins, a member of International Cinematographers Guild Local 600, had supported the workers. Local 480 and Local 600 held a candlelight vigil for her Oct. 24, attended by over 400 union members at the Albuquerque Civic Plaza.

One of the IATSE members at the vigil told Workers World in regards to overall exhaustion and the lack of lunch breaks: “They give us meal penalties. If we don’t break after six hours, they give us more money the longer we don’t break. It’s good money, but we are exhausted. We don’t want the extra money anymore.”

What happened in Santa Fe is not an isolated incident. “Safety on Set” is the primary issue for the 60,000 IATSE members across the country who voted in favor of a strike earlier in October. A strike was averted when the union reached a tentative agreement with movie and television industry executives, but the contract could be rejected if members don’t think it goes far enough in addressing their issues. That could lead to a strike.

As the contract vote gets underway, the tragedy in Santa Fe reminds workers of what is at stake. A countrywide IATSE strike would not be an isolated skirmish but would be another front in the current resurgence of labor militancy.

As the month referred to as “Striketober” comes to a close, there are more signs of worker resistance. According to Cornell University’s Labor Action Tracker, there are at least 40 U.S. strikes in progress currently — 26 of which began this month. New strikes may be on the way.

After three years of trying to negotiate a decent contract, 350 Piedmont airlines flight attendants voted Oct. 21 to authorize a strike. After the vote dozens in Philadelphia picketed the company, a subsidiary of American Airlines. The slight wage increase management offered would be more than offset by an increase in the workers’ share of health care costs. 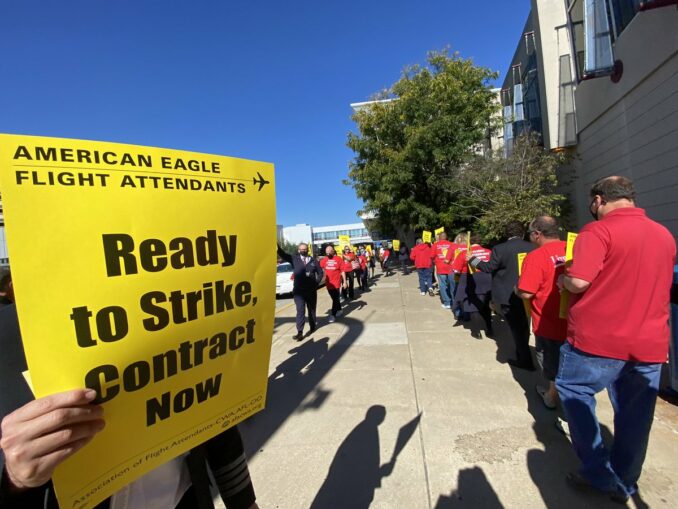 Piedmont flight attendants are ready to strike in Philadelphia, Oct. 21.

The Association of Flight Attendants-CWA plans to employ its CHAOS — Create Havoc Around Our System — strategy if a strike is deemed necessary. CHAOS involves intermittently striking at one or multiple locations without notifying the company or passengers. “We’ve seen in the last few months how delicate the aviation system is and how much it depends on every worker,” AFA-CWA International President Sara Nelson explained. (Philly Voice, Oct. 22)

In Hawaii, 1,500 health care workers represented by United Nurses Associations of California/Union of Health Care Professionals are voting on whether to authorize a strike at Kaiser Permanente. This follows previous votes in favor of striking Kaiser by 21,000 UNAC/UHCP members in California and 3,400 members of Oregon Federation of Nurses and Health Professionals. There have been at least 30 health care worker strikes this year, including the continuing eight-month strike of nurses in Worcester, Mass., and the Buffalo Mercy Hospital strike now in its fourth week.

After unsafe COVID conditions led to three worker deaths, stagehands at the North Shore Music Theatre in Beverly, Mass., unionized through IATSE Local 11. After a one-day strike earlier this month, they won a pay increase. Graduate student workers at Harvard University are poised to strike if they don’t get an acceptable contract by the end of October. Alabama coal mine workers are about to enter their eighth month on strike.

Strikes at Kellogg’s and John Deere continue, both with widespread union and community support. The rank-and-file caucus inside the United Auto Workers, Unite All Workers for Democracy, posted a fundraising appeal for the UAW members striking Deere. The post went viral, raising many times over its initial goal of $10,000.

Both companies are trying to break the strikes, hiring strikebreakers and having inexperienced supervisors do union members’ jobs. Kellogg’s actually published an ad seeking workers “to cross the picket line.” Deere has secured a court injunction limiting the number of pickets.

The battle lines have been drawn. The working class isn’t waiting for salvation via the “Build Back Better” bill that Congress is stalling on. They are wielding their own power at the point of production.

Next month could be “Strikevember.”

Stephanie Hedgecoke contributed to this article.