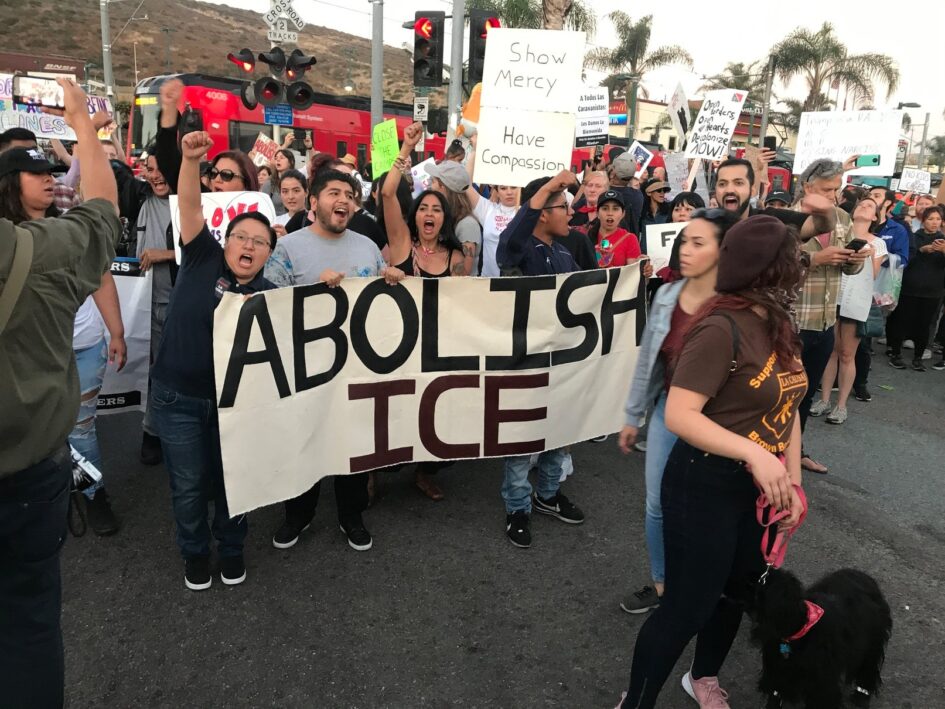 Photo: Protesters stand and chant at the U.S./Mexico border, protesting against ICE and the migrant concentration camps. Liberation photo

As of September 2021, the number of unaccompanied migrant youth crossing the U.S.-Mexico border this year has spiked to 130,000. The previous large surge occurred in 2019, when 76,000 minors had entered the country. Overall border crossings are hitting 20-year highs.

Unlike migrant adults, unaccompanied youth cannot be deported and must be cared for by the U.S. Office of Refugee Resettlement until they reach adulthood. Once they reach adulthood, their shelters or guardians are legally required to hand them back to ICE, who then immediately begin the deportation process.

There is a growing pressure from immigrant rights activists on the Biden administration to address the immigration surge. The new reconciliation package initially included progressive reforms for immigrants, but have been shot down by parliamentarian Elizabeth MacDonough based on arcane rules related to the budgeting process. The immigrant rights movement is now rightfully demanding that the Senate ignore MacDonough’s ruling, which is not legally binding.

Complete disregard for the safety of immigrant youth

Legally, Customs and Border Protection must send youth to a detention center within two days of being captured. In practice, the CBP has set up makeshift tent cities at military bases. Hundreds are held far past the legal limit. The number of unaccompanied minors held in facilities each day is kept secret by the CBP. According to a document obtained by CNN, the number seems to fluctuate around 5,000 held on a given day.

Disability Rights California found that even the standard facilities, run by the Office of Refugee Resettlement, lack adequate medical care, mental health assessments, and special education services. Documents released from within the Office of Refugee Resettlement have uncovered instances of sexual abuse of children by staff. At least one sexual assault case had gone unreported to Child Protective Services.

Once placed in foster care or with family, there is little federal oversight to ensure that minors are safe and supported. From enrolling in public school to accessing healthcare and legal services, youth are completely dependent on their placements.

During the initial placement, unaccompanied migrant youth are at heightened risk of labor trafficking. Documented examples of this include youth forced into agriculture work in chicken slaughterhouses and egg farms. Undocumented minors are in a hugely difficult position. Without a social security number, it becomes impossible to work in most professional fields, receive financial aid for college, and complete criminal background checks.

How susceptible are these youth to fall into trafficking or inadequate conditions? It may not be possible to say. As of September, 2021, the Biden administration had lost track of one-in-three youth who were released to foster or guardian custody. Of the 14,600 calls made to sponsors, less than 5,000 responded. Thousands more sponsors are overdue for check-in calls which have not happened due to overwhelmed services.

The Border Patrol argues that many of the children under 12 have been smuggled in by criminal organizations. This only tells half of the story. According to a United Nations report, most unaccompanied minors are arriving from El Salvador, Honduras, Guatemala and Mexico. These countries have some of the highest poverty, violent crime and gang violence rates in the world. Rather than being taken from parents by criminals, parents may make the desperate choice to send their children either completely alone, in a caravan or through smugglers.

While mainstream media might cover the poor conditions in some in these countries, they ignore the role the U.S. government and corporations played in creating those conditions. For instance, the U.S. agricultural industry forced Mexico to remove vital protections for farmers with the North American Free Trade Agreement. NAFTA oversaw the purchasing of individually owned Mexican farmland by U.S. corporations, which led to mass unemployment and a rise in the drug trade which continues today. U.S. support for dictatorships, death squads and corrupt elites in Guatemala, Honduras and El Salvador — historically and in the present day — have led to the breakdown of many normal government functions along with deep poverty.

The Biden administration is still relying on Trump era anti-immigration policies. The makeshift “tent city” policy was a carry-over that has not changed under Biden.

Title 42, a Centers for Disease Control preventative measure to contain the spread of COVID-19, is being used to turn away migrants at the southern border. Only recently has a judge ruled that unaccompanied minors should be exempted from expulsion. Regardless, public health experts have clarified that immigrants are no more likely to spread COVID-19 than the rest of the general population.

The current administration has taken some steps to rein in ICE and cut down on discriminatory immigration bans, but they have also taken large steps back. They have shortened the window for asylum claims to be defended in court from 365 days to 300 days. Finding an immigration lawyer can take months, and without a lawyer the chances of succeeding in court are slim.

Immigration itself is not a crisis. Immigrant youth work hard to survive in a country that is astoundingly hostile towards them. The U.S. ruling class has more than enough wealth to provide public services for all who need them. There does not need to be a false competition between U.S.-born and foreign-born workers for access to resources that are in fact abundant — but are being hoarded by the fabulously rich.