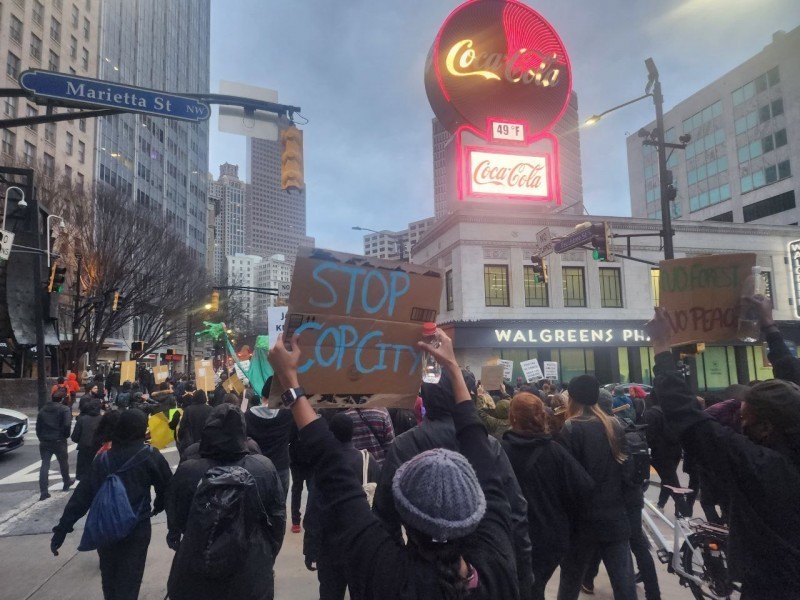 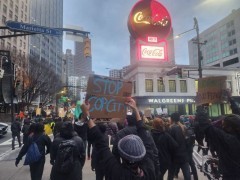 Atlanta, GA – Over 300 people gathered January 21 at Underground Atlanta shopping center to honor the life of Manuel “Manny” “Tortuguita” “Teran” Paez, demand an end to the building of Cop City and to defend an Atlanta forest.

The Atlanta Police Department is seeking to build a new $80 million training facility that activists are calling “Cop City.” The proposed training facility would require the destruction of 300 acres of forestland in the southeastern part of the city and would be used to train police officers in new innovative ways to oppress and brutalize people. Cop City would be equipped with a shooting range as well as weapons and explosives testing.

Paez, also known as Tortuguita, was occupying the forest to prevent the building of Cop City when they were murdered by Georgia State Patrol on January 18. It’s still unclear what happened that night. Police accounts of what transpired contradict other accounts, but those that knew Paez say they were nonviolent. Given Georgia law enforcement’s track record of lies and cover-ups however, those that knew Paez question the official police narrative.

Before Paez had moved to Atlanta they were an activist in Tallahassee, Florida organizing with the Tallahassee Community Action Committee (TCAC).

“Manuel Paez was an activist and organizer who fought for what they believed in. They were present for countless protests and events against police brutality and for reproductive rights and LGBTQ justice. They weren’t a person who believed in hurting people for no reason. The real criminal is the police officer who murdered them in cold blood,” said Delilah Pierre, president of TCAC.

Attendants at the protest recommitted to the fight against Cop City and to continue the fight in honor of Manny’s life.

After years of setbacks, U.S. labor demonstrates its power

How we stopped coal in England