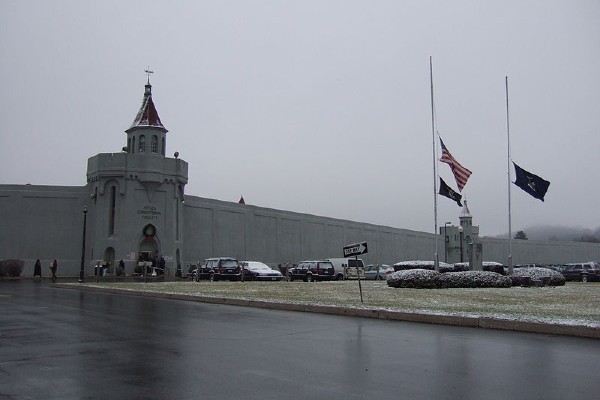 The outside of Attica prison (Pic: Wikicommons)

A prison uprising can leave even presidents shaken.

That was certainly the case in August 1971 when people caged in Attica prison in upstate New York revolted against the system of incarceration.

The revolt was a powerful element that formed part of a period of rage and revolt against the racism ingrained within US society.

It also showed that determination to resist was so strong that it could appear anywhere, even within prison walls.

Such conditions were commonplace in prisons across the US.

White guards, some of them members of white supremacist organisations, watched over the inmates.

The civil rights movement had inspired many of the inmates. And the recent murders of Black Panther Fred Hampton and Malcolm X led them to revolutionary conclusions.

The group understood that the violent prison system was a tool of the state to oppress individuals based on race and class.

They argued for prison reforms such as a minimum wage and better conditions.

But they also argued for prisons to be replaced with educational programmes that gave more opportunities to working class people.

In the following weeks, tensions between guards and inmates rose and culminated in a riot beginning on 9 September.

Elliott Barkley was elected speaker. He told the press, “We are men, we are not beasts, and we do not intend to be beaten or driven as such.

“What has happened here is but the sound before the fury of those who are oppressed.”

In the yard rivalries between prisoners started to break down. One older man reportedly began to cry as it had been so long since he was “allowed to get close to someone.” The revolt shook the ruling class leading President Richard Nixon to intervene.

Nixon and the prison bosses wanted to set a clear example to black inmates and their families and supporters that their resistance would be futile.

They called for the uprising to be crushed and demands for an amnesty to be ignored.

Prisoners refused to back down, and so the prison commissioner ordered troops into the yard.

They massacred 29 prisoners and shot Barkley in the back.

Survivors were stripped, tortured and deprived of medical attention. Blyden was starved for days, and others were sexually assaulted and had their genitals mutilated.

Prison bosses branded their rampage a “beautiful operation”. Nixon agreed, saying the way to stop “radicals” was to “kill a few”.

Attica has been a model for many following prison strikes, including the 2016 strike, which began on Attica’s 45th anniversary.

Those strikes spread to 45 facilities.

It showed that some of the most downtrodden and oppressed people would fight back fiercely by any means necessary.