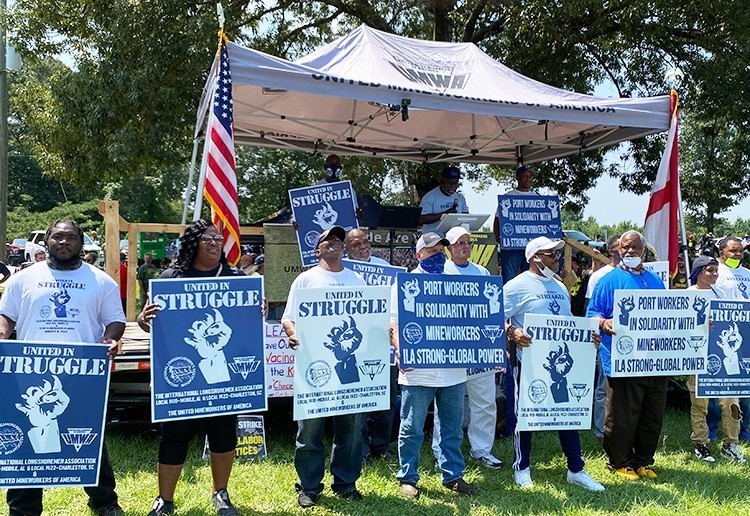 BROOKWOOD, Ala. — Shouts of “No contract, no coal!” and “One day longer, one day stronger!” rang out from the Brookwood Ball Park Aug. 4 as striking miners and union supporters from surrounding states — more than 1,500 in all — rallied to show support for the 1,100 miners on strike against Warrior Met Coal here.

“The rally today was great,” striking United Mine Workers of America member Kenneth Hoobler told the Militant. “We really needed it! This strike isn’t mainly about money. It’s about your life, your days off, being able to be with your family.” An underground electrician at the No. 4 mine, Hoobler and his fellow miners have been on strike since April 1. They maintain round-the-clock picket lines at two mines, No. 4 and No. 7, and a preparation plant and central shops.

“It’s about the younger generation of miners too,” added Hoobler’s wife, Deborah. “If the company gets away with this, conditions will be much worse for the younger miners coming up.”

Many unions were represented at the rally, including the United Auto Workers, United Steelworkers, Teamsters, American Federation of Teachers, Communications Workers of America, government worker unions AFSCME and AFGE, the Retail, Wholesale and Department Store Union, and others.

“This is not just a fight for the coal miners,” said International Longshoremen’s Association leader Mark Bass, speaking to the Militant at the ILA’s big canopy. “This is a fight for unions and workers throughout the country.” Bass, president of ILA Local 1410 in Mobile, was one of some 60 longshore workers who came from Charleston, South Carolina; Jacksonville, Florida; and Mobile to support the Warrior Met miners.

“We’re committed to you,” Ken Riley, ILA Local 1422 president in Charleston, South Carolina, told rally participants from the stage. “We are committed to winning this strike.” ILA members lined up in front of the stage as Riley spoke, wearing beautiful blue and white T-shirts they had made for the rally, reading “United in struggle.”

UMWA President Cecil Roberts was the featured speaker, joined on the platform by labor officials from other unions. Applause and cheers greeted Roberts’ praise of the auxiliary organized by miners’ wives that provides food, diapers, cleaning supplies and other necessities to strikers’ families.

Spread the word about this strike!

“When you go back to Kentucky or wherever you came here from,” Roberts told the crowd, “we ask you to spread the word about this strike!”

The mood of the crowd was upbeat, as workers from different unions mixed it up throughout the day, talking with Brookwood strikers and participants from other unions and states.

“When we read Warrior Met’s contract offer after we’d been on strike a few days, we were outraged,” UMWA striker Bryan Butler told Allen Lang, a retired Ford worker and UAW member from Louisville, Kentucky. “The company offered a $1.50 an hour wage increase over five years, only five paid holidays, a terrible attendance policy! We walked out of the meeting. Now Warrior Met is giving scabs a $1,500 hiring bonus and weekends off!”

“They’re giving the scabs what you should be getting!” replied Lang.

Union members had been working since 2016 under a concession contract forced on the union, after the mines’ previous owner, Jim Walter Resources, went bankrupt.

With the aid of a capitalist bankruptcy court, BlackRock and other billionaire creditors set up Warrior Met Coal and took over mine operations, promising they would give miners back what they gave up to make the company profitable.

Along with a $6-an-hour pay cut, miners’ health care costs were increased from a $12 co-pay to a $1,500 deductible. Extra overtime pay for Sundays and holidays was eliminated; 13 annual paid holidays were cut to three; a harsh attendance policy was instituted, along with no cap on forced overtime; and other concessions. The cuts add up $1.1 billion in losses for the workers over the last five years, the union calculates.

Warrior Met is a top U.S. producer of metallurgical coal for the global steel industry. They reported profits in both quarters of 2021, as the COVID pandemic eased and coal prices have risen.

Support for the strike is growing, as news of this union battle spreads and the stakes become clearer to more working people, especially union members.

“The outcome of this strike is important and not just for miners,” said Alyson Kennedy, who used to work as an underground coal miner in the Brookwood mines. Kennedy, who came to the rally from Dallas, was the Socialist Workers Party presidential candidate in 2020. “There are only two other unionized mines left in Alabama, besides Warrior Met. The mine bosses there are watching carefully what happens in Brookwood. Steelworkers in this area also have contracts coming up.”

The union has organized weekly solidarity rallies at Tannehill State Park in nearby McCalla since shortly after the strike began. These draw strikers and their families, UMWA retirees, community groups backing the strike, national union leaders and others.

The union’s strike fund grows by the day, winning contributions from many UMWA locals and districts, other unions, and AFL-CIO affiliates, as well as from individuals and Walmart workers in several locations. New contributions were announced from the stage at the Aug. 4 rally. The union is paying benefits to the strikers and covering some health insurance costs.

The UMWA has also organized two picket lines at the offices of BlackRock in New York City in recent weeks. The latest protest on July 28 drew hundreds of UMWA members, including strikers from Alabama, and unionists from New York and New Jersey. BlackRock is Warrior Met’s largest shareholder.

Tension on the picket lines has been growing, as the company continues to bus in scabs and management personnel to mine coal at the No. 7 mine. Some miners report a small number of union members have crossed the line. On several occasions, miners or supporters have been hit by scabs’ vehicles driven in a way to deliberately hurt pickets.

Maggie Trowe from Louisville, Kentucky, contributed to this article.