Back on the streets in China 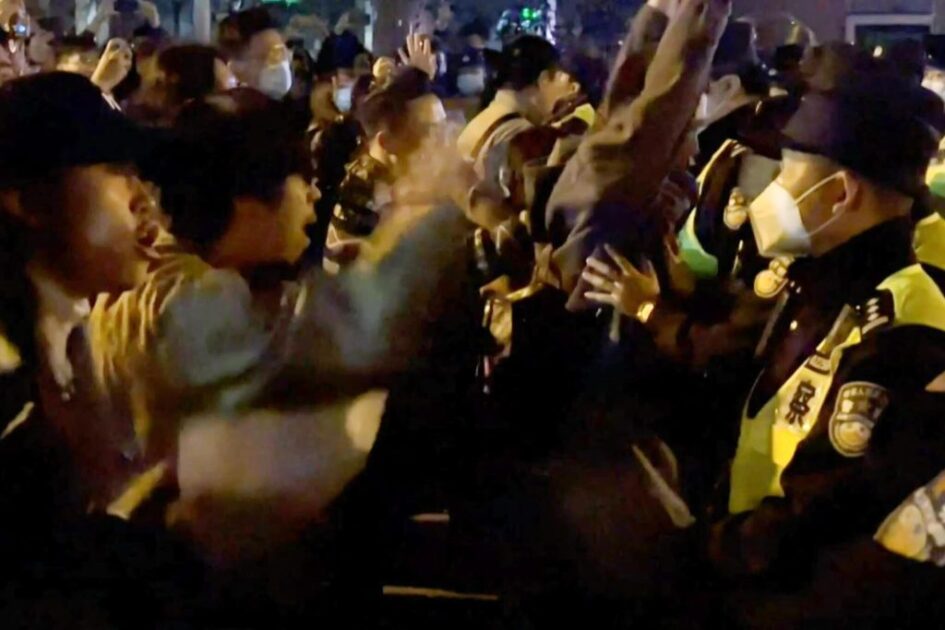 After a weekend of widespread protests across China, rs21 member Charlie Hore explains the movement’s significance and looks at what might come next.

Protest returned to the streets of China’s cities last week on a scale not seen for several decades. The immediate cause was horror at a fire in an apartment block in Urumqi, the capital of Xinjiang province, in which at least ten people died and more were seriously injured. It’s widely believed that Covid lockdown restrictions, which in China routinely include locking apartment buildings from the outside, caused many of the deaths. Most if not all of the dead were Uyghurs.

Covid lockdowns have been even more onerous in Xinjiang than elsewhere in China, with some residents effectively confined to their houses since August, and reports of food shortages in smaller towns in September. The lockdowns have come amid years of Islamophobic repression against the Uyghur population and other majority-Muslim groups in Xinjiang, and have used many of the same coercive measures.

The following day hundreds of people, mostly Han Chinese (ie ethnically Chinese) but including some Uyghurs, demonstrated outside government buildings in Urumqi in a rare cross-communal protest. The Associated Press news agency reported:

A Uyghur woman in Urumqi said Uyghurs were too scared to take to the streets. “Han Chinese people know they will not be punished if they speak against the lockdown,” said the woman, who asked not to be identified by name for fear of retaliation. “Uyghurs are different. If we dare say such things, we will be taken to prison or to the camps.”

Over the weekend, solidarity protests spread to Beijing, Shanghai, Wuhan (where the pandemic started), Guangzhou and many other towns and cities, with videos showing large crowds confronting police, removing police barriers, and chanting explicitly anti-government slogans. One Twitter user has posted a list of over 50 universities that held protests, including a number of elite universities in Beijing. And there have been a number of solidarity events on campuses in Hong Kong, the first oppositional activity since the defeat of the 2019 revolt.

Much of the press coverage has attributed the protests to China’s ‘zero Covid’ strategy, but they have nothing in common with the ‘anti-vaxxer’ movements that appeared in a number of Western countries – apart from anything else, most pictures of the demos show large number of the participants wearing masks. In reality, China’s version of zero Covid has relied very heavily on large-scale repressive lockdowns, with a sluggish vaccination programme. The Lancet quoted a Chinese minister as saying that ‘even though more than 87% of the population have received two doses of the vaccine, among those older than 80 years, just over half have had two doses and less than 20% have received a booster’. The vaccination programme has also only used Chinese vaccines, which worked well against earlier variants but are less effective against Omicron.

Zero Covid policies have had greater success in such diverse countries as Vietnam, Taiwan and New Zealand through multiple health strategies in which lockdowns played an important but secondary part, and attempts to win high levels of public support for the government’s overall strategy. China’s over-reliance on coercive measures rather than on-going public health campaigns has eroded public support, in particular as it hasn’t worked as the government hoped it would – Covid numbers surged this month to the highest since April, with lockdowns being reimposed in some cities for the third or fourth time. Confusingly, these came almost immediately after the government had announced a relaxation of the rules, in a move that was seen as a response to widespread public resentment.

The Xinjiang fire draws together the many health concerns about locking down buildings, unregulated and shoddy high-rise development, and the greater fire risks that accompany such development. Tens of millions of people will look at it and think ‘That could be us.’ But it’s also a symptom of the much wider problems that the lockdown strategy has created.

Last week thousands of new workers at the huge Foxconn plant in Zhengzhou, central China, (the world’s biggest iPhone producer) faced off against police protesting against the company’s failure to honour a bonus package they were promised. They had been recruited following a mass exodus of migrant workers earlier this month trying to avoid a quarantine lockdown. As one academic explained about the exodus:

It’s definitely collective action. The workers were having a collective experience locked in the workplace in their dormitories. They presumably developed, as you see in any kind of labor action, a sense of common interest, collective grievances, and a course of action. It wasn’t just that you saw one worker jumping over a fence. You see the images and the videos of these long lines of hundreds or thousands of people walking on the highways, walking through fields, trying to avoid the pandemic control workers who are trying to stop them…clearly there were collective decisions that were being made. It was not a centralized leadership. But they almost certainly were sharing information about where to escape. Once they got out, there was information about where they might find transportation or access to food…we saw that locals were putting out food and water. They were arranging these kinds of decentralized mutual aid to try to help the workers.

Opposition to lockdowns and intrusive policing through phone apps has clearly become a unifying issue for many different groups in Chinese society, one which is continuing to cause severe social and economic uncertainty. Crucially, it’s an issue that focuses attention on the central state in general, and Xi Jinping in particular.

There have been much bigger protests in China since the Tiananmen Square massacre – migrants workers’ strikes, laid-off workers protests against non-payment of redundancy agreements, peasant demonstrations against local taxes and land seizures, environmental protests against polluting chemical factories, nationalist movements in Tibet and Xinjiang, and many more. However, with the exception of Tibet and Xinjiang, these have for the most part been localised and fragmented protests, directed against either factory management or local authorities – in large part because of the decentralisation of economic and political power to those agencies as part of the post-Mao economic reforms.

The Xi Jinping era has seen a reassertion of the central state’s controls over the media, economic and social life, as well as several crackdowns on such diverse grass-roots groups as feminist activists, Maoist students and labour NGOs. Strikes have been largely exempt from this, as long as they have remained confined to a single employer and not raised political demands, but most other forms of protest are policed more aggressively than before.

The demonstrations of the last few days represent the biggest and most widespread upsurge from below of the Xi Jinping era. The chants against the CCP and Xi Jinping, even if confined to a minority of those protesting, are wholly unprecedented. And if reports of the extent of university demonstrations are true, these would be the biggest oppositional student actions since 1989.[1]

There are other echoes of 1989, as well – the crowds were mostly young, and there were numerous reports of singing of both the national anthem (with its refrain of ‘Rise up! Rise up! Rise up!’) and the Internationale, which in the context of street protests are explicitly anti-government. But there are also two wholly new factors at work. The first is television – pretty much everyone in towns and cities has access to television, and especially in southern China many people can access satellite channels from outside China. Several press reports have quoted TV coverage of the World Cup showing large unrestricted crowds as contributing to popular resentment of lockdown.

The other is social media. Although both Chinese and global platforms are heavily censored, users continually find new ways of getting round the censors, as with the tactic of holding up blank sheets of paper (because ‘everyone knows what I want to say’), copied from the recent Hong Kong revolt.

Social media has also allowed for a lot of coverage of the events in the Western media, and there is of course a huge amount of hypocrisy on display in their reporting. Covid death tolls have been far worse in Britain and the USA than in China (in absolute numbers, not just proportionally)[2], and strikes and protests in China get far more sympathetic coverage than similar events here. But the enemy of our enemy is not our friend – internationalism necessarily means supporting all struggles from below against oppression and exploitation.

We should be wary of making too many direct comparisons with 1989 – history is unlikely to repeat itself, and the Chinese Communist party (CCP) is now much more adept at using a combination of concessions and repression to head off large-scale discontent. There were large police presences in a number of cities to deter future protests, which in the absence of any central co-ordination were always likely to peter out sooner rather than later, and a number of universities are sending students home early for the winter break. And the central government is already trying to shift the blame onto local authorities for heavy-handed implementation of the restrictions.

However, the CCP faces a genuine dilemma: if they simply lift all restrictions there is a danger that Covid figures will soar and overwhelm (grossly underfunded) health services, but simply keeping them in their present form runs the risk of further rounds of protests. The Lausan Collective, a group of Hong Kong and Chinese socialists, has issued a list of demands that take the Covid crisis seriously but stress that ‘Pandemic control measures must be informed by medical experts and conducted democratically amongst the people’. For the CCP, the risk is precisely that people are starting to draw the connections between lockdowns and the larger lack of control over their everyday lives, and the more concessions they make the greater the appetite for more. The current bout of protests may have run their course, but the tensions that caused them are likely to erupt again. And the death of Jiang Zemin, Deng Xiaoping’s chosen successor, who became China’s leader after 1989, could hardly have come at a worse time. Xi Jinping’s assumption of lifetime power at the recent CCP congress is suddenly starting to look rather more fragile.

[1] There were nationalist mobilisations against the American bombing of China’s embassy in Belgrade in in 1999, and against Japan in 2005, but these were state-sanctioned (and quickly closed down in case they got out of hand).

When British troops were sent onto Ireland’s streets

Large protest of teachers hit the streets of San Juan