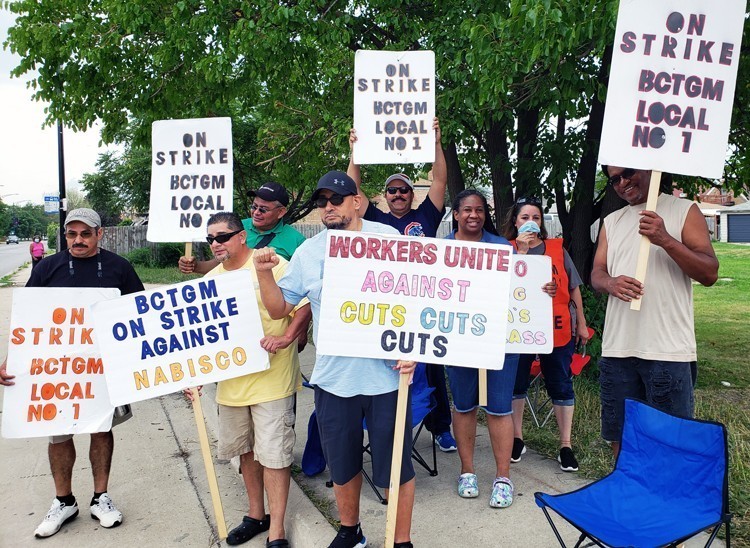 PORTLAND, Ore. — “We were the first to go out, on Aug. 10,” Cameron Taylor, business agent for Bakery, Confectionery, Tobacco Workers and Grain Millers International Union Local 364, which represents about 200 workers on strike at the Nabisco bakery here, told the Militant Aug. 21.

Their strike began a cascade of other walkouts at Nabisco: its distribution plant in Aurora, Colorado, Aug. 12; at its bakery in Richmond, Virginia, Aug. 16; at the company’s flagship U.S. bakery in Chicago Aug. 19; and in Norcross, Georgia, Aug. 23.

Two rallies have already taken place in Portland, and strikers say their picket gets near-constant honks of support.

The workers are fighting attacks on work schedules, seniority and overtime pay, increasing health insurance costs, and cuts to pensions. The company wants to start running 12-hour shifts or longer, with overtime pay kicking in only if workers labor more than a 40-hour week, instead of after eight hours a day. Bosses want to eliminate time and a half pay for Saturdays and double time on Sundays. And they want to bring in more non-union temporary workers.

“For five years the company has refused to let the union business agent into the plant to deal with grievances,” said Judy Schultz, a forklift driver with 37 years at the plant. “All their ‘offers’ are takeaways. The plant manager said, ‘They have too many holidays, too many nice cars in the parking lot!’”

“It’s never enough for the bosses. That’s why your example of standing up is so important. Corporations are doing this all over, and they’re backed up by their fellow capitalist rulers, who have the state power, the cops and the courts,” Rebecca Williamson, a worker at Walmart and Socialist Workers Party candidate for City Council in Seattle, told strikers on the picket line Aug. 20. “Workers and farmers make and create everything. We must build a working-class leadership and our own political party to break out of this cycle.”

Williamson is one of three Walmart workers who came to support the strike. Williamson and Patricia Scott, who both work at the Federal Way store, brought a card signed by co-workers along with contributions of $50. Strikers on the picket line were delighted.

“They never want to fix our equipment,” said Portia LeBleu, who works in the mixing department. “They’re trying to take away jobs by trying to get us to do other people’s jobs,” added Eileen Giskaas.

We urged pickets to get in touch with United Mine Workers members who’ve been on strike since April against Warrior Met Coal in Alabama. They hold weekly rallies every Wednesday, including one of 1,500 there Aug. 4, with buses coming in with longshoremen and others from all around the area. The Nabisco strikers really liked the sound of that!

Several picked up copies of the Militant reporting on the rally to learn more about the miners strike and other issues affecting working people.

When you fight you can win, said Joyce McNair, a baker with 14 years in the plant. “It makes you feel better because they can’t just do anything to you — you have better working conditions, better pay.”

Strikers said the company began busing in scabs a week into the strike and a few workers crossed the line. But they’re confident in their strike, which is getting support from other unions in the plant who aren’t on strike but are honoring their picket lines, including operating engineers, machinists, electrical workers, and Teamsters.

You can help! Visit BCTGM Local 364 Facebook page and send contributions to www.gofundme.com/f/bctgm-local-364-strike-support.

BY JAMES HARRIS
HENRICO COUNTY, Va. — “I am overwhelmed with the amount of support we are getting. It’s the solidarity that is the most important,” said BCTGM Local 358 business agent Darlene Carpenter when we joined the picket line outside the Nabisco plant here.

Some 400 bakery workers went on strike here Aug. 16 to stop the company’s demands for more concessions and its attempt to divide and conquer the workers.

“The company pushed us to this point and they don’t care,” said Carpenter. The lively picket line is up 24/7 and includes nightly fish fries and line dancing.

Key to the strike is the company’s proposed “alternative work schedule on select high-demand lines.” This would mean 12-hour shifts at straight time, rotating two days on, two days off for two weeks, and three days on and  two days off for the third.

“They say they want to improve our ‘work-life balance,’” said Keith Bragg, president of BCTGM Local 358. “But it destroys it. It takes time away from our family and kids. They are taking us back to the past, before the eight-hour workday, when we worked ‘sun up to sun down.’ What’s to stop them from calling every line ‘high demand?’”

The company also wants new hires to pay health care deductibles, where current workers would continue to get 100% coverage.  “We gave up raises to not pay health insurance premiums, and now they are using that against us,” Bragg said.

Christine Brown, a packing technician who has worked in the plant for 20 years, said, “We’re not fighting to get more but to keep what we’ve got. They are trying to pit the younger workers against the older ones.”

Under government lockdown orders people across the country were buying up snacks like there’s no tomorrow. “Last year during the pandemic, some people worked 16-hour days for 10 days straight,” Carpenter said. “And workers in the plant lived with the fear that if they caught COVID they would bring it home to their families.”

Pointing to a sign at the plant entrance that reads ‘Heroes work here,’ Marva Carter, a 21-year veteran machine operator, said, “We went from hero to zero in just a few days.”

Despite what the company claims, “nothing in the plant is running.” Christine Brown told the Militant. Workers pointed out that when the plant is operating, you can smell the product, and now there is no smell.

I told strikers on the picket line that they’re fighting not just for themselves, but for all workers. They’re setting an inspiring example.

“When we win this strike,” Carpenter said, “come back and help us celebrate.” I said I’d be back soon with more solidarity.

Nabisco workers walk off the job in Chicago

BY ILONA GERSH
CHICAGO — Some 350 workers walked off the job at midnight Aug. 19 at the Nabisco factory on the South Side here. They were joined the next day by 40 workers at a company distribution center in Addison, a Chicago suburb.

“I want to emphasize, that we’re not negotiating for anything new,” Veronica Hopkins, Bakery Workers union Local 1 business agent, told Militant worker-correspondents who joined the picket line Aug. 21. “We’re trying to hold on to what we won a long time ago. These are rights that the company is trying to take away despite the fact that they are reporting record profits.

“For most of the workers, the number one issue is health care,” Hopkins said.

Salvador Gustavo, a Nabisco retiree, came back to work two months ago in the repack department, where everyone is part time. “I couldn’t afford to retire,” he said. “I want to transfer into the factory. Where I am, I’m part time, and we don’t have any benefits, no vacations or health care. I especially need the health care.”

He makes $11.50 an hour, while starting pay for production workers in the factory is $19.36, and goes up to almost $30. Gustavo isn’t on strike, since the part-time department is not union, but he pickets when he’s not working.

Tommy Hamer is a mixer who has worked here for 17 years. He carried over years of  seniority from working 20 years in another Chicago Nabisco plant the bosses closed.

“The health care plan we have now pays 100% of the expenses, with no co-pays or monthly payments. They want to make it 80/20, and want to make us pay a weekly payment for the benefits we get,” Hamer said. “This is going to start forcing us to choose between health care and other necessary living expenses.” He’s 66 years old and recently had a stroke.

At first the company wanted to get rid of 100% health care coverage for all workers. But when the union said no, the company replied, “OK, we’ll let present employees keep their 100% coverage, if they accept everything else we’re asking for as a package. But new hires will have to pay for their health care.”

“That’s a bribe,” Hamer said. “They want to keep us all divided.”

Strikers told us the bosses have sped up the line.  “As a mixer, I should be mixing 16 batches per eight-hour shift. Now it’s up to 20,” said Hamer.

Paul Hood, a forklift operator, has worked in the plant for 25 years. When we asked about safety on the job, he said, “Management talks the talk, but they don’t walk the walk. And if you have an accident, they blame you.”

In 2016, the factory shut down its Oreo, Ritz cracker, and graham cracker production lines, transferring the work to a factory in Mexico. Six hundred jobs in Chicago were eliminated.

“They hired 200 back, but we still lost 400 jobs, and they haven’t been replacing many workers who are promoted or quit,” Hopkins said.

“If someone calls off and the shift is short of workers, they force us to do overtime, which is mandatory,” said Hamer. “They can make us work up to 16 hours. I want to work my eight hours and go home, and have Saturday and Sunday off.”

Nabisco wants to set the workday at 12 hours on so-called  essential production lines, or lines with high volume. “But they control the volume,” Hopkins said. “They can shift production from another factory to here, and then say that they need to run 12-hour shifts. And that other factory is left short on work.”