Back to the future: revolutionary art on the Mersey 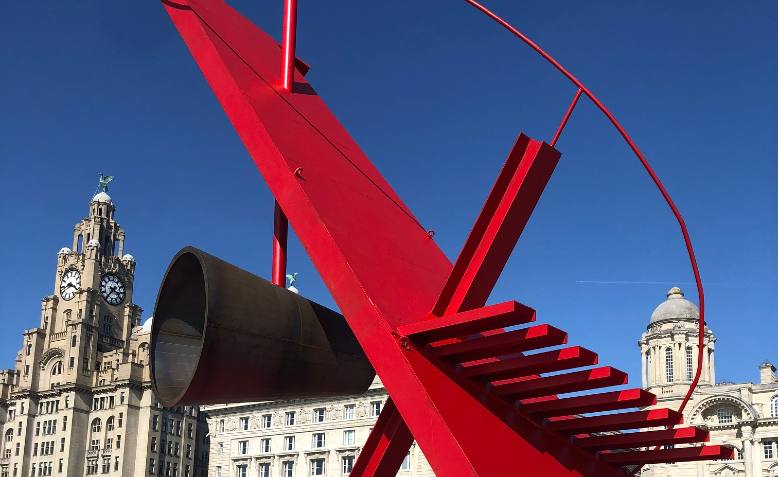 A new installation on the Mersey is a homage to a militant history and radical art, writes Chris Nineham

Liverpool’s waterfront has a brand new monument that speaks to a hidden past and to the future. For a few weeks the Museum of Liverpool and the early twentieth century landmarks to international shipping on the Pier Head have a competitor. ‘Mersey Sounds’ a red steel installation, a collaboration between Architect Daniel Smith and Writing on the Wall, is a reminder of Liverpool’s fighting working class tradition and a homage to Arthur Dooley, a great working class Liverpool artist.

The striking new twelve metre installation has the clean experimental lines of the modern artists thrown up by the Russian revolution like El Lissitsky, Aleksander Rodchenko and Vladimir Tatlin. It is built around a huge steel megaphone inspired by Rodchenko’s famous poster of a woman activist, ‘Shout Out!’

The piece is a homage to Arthur Dooley’s ‘Speakers Podium’ for workers that was built on the Pier Head in 1973. It was used for waterfront demonstrations, protests and meetings by dockers and others. The platform became known as ‘speakers’ corner’ at the high point of post-war industrial militancy.

Dooley was a communist sculptor and his platform also drew inspiration from the Russian ‘constructivist’ artists of the post-revolutionary period. Contemporary photos show in particular it echoed the famous ‘Tatlin Tower’ designed as a symbol of the dynamism and promise of the Russian revolution.

Dooley was a great artist and a complex character. He had a big following in Liverpool and beyond. His training came in Liverpool’s Cammell Laird shipyard where he learnt the skills necessary to become a metal sculptor. By chance he later found himself working as a cleaner in St Martin’s School of Art in London and it was this experience that convinced him to become an artist. He felt that he had a life knowledge, skills and a class understanding of the world absent from mainstream art.

Dooley made many celebrated sculptures. As well as being a communist, he had a radical take on Catholicism and one of his best known works is the ‘Black Christ’, a very human and multi-racial image of the resurrection that still leans upwards outside the Methodist Church on Princes Avenue in Liverpool 8.

Daniel Smith is a Liverpool architect who has been pushing to have Dooley’s podium celebrated for years. In recent years he discovered  that his own father installed the steel girders for Dooley’s platform. His installation incorporates a cross in its base to commemorate Dooley’s religious sensibility but it embodies more than anything the confident, avant garde spirit of revolutionary modernism.

It is a reminder of a radical, popular history and working class creativity that the bland, corporate development on Liverpool’s historic waterfront is in danger of erasing. To complement the constructivist shock value of the piece, built-in speakers broadcast snatches of speeches and testimony which conjure some of the multi-cultural history of protest and dissent in the city. In a moment in which the right to protest is under attack, it is a work that looks forward as well as back.