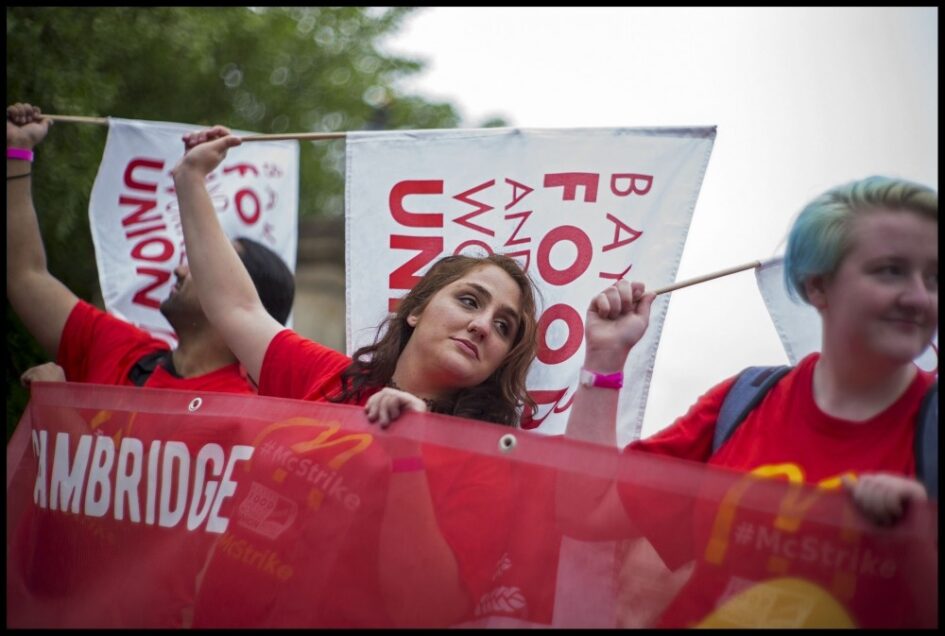 From The Socialist newspaper, 6 October 2021

Editorial of the Socialist issue 1150 Now step up the fight for a new workers’ politics

“The decision taken by delegates who predominantly live in what’s regarded as Labour red wall seats shows how far the Labour Party has travelled away from the aims and hopes of working-class organisations like ours”.

This is how the BFAWU bakers’ union opened up its statement to explain why its special conference on September 28 had disaffiliated from Labour and broken the union’s link with the organisation that it had “levied its poorly paid members” for in 1902, in order “to build a party that would bring about real change to their lives”.

This is an historic moment and brings centre stage the question as to how the unions and their members build a political vehicle that can complement industrial struggle and offer an alternative to the big business political consensus. That the Labour Party under the leadership of Sir Keir Starmer is firmly back in that groove was confirmed at its annual conference last week.

The Labour leadership was determined to send a clear message to the capitalist establishment that Corbynism is over and Labour is again a reliable tool for the rich, as it was under Tony Blair, Gordon Brown and Ed Miliband. Starmer decidedly rowed back on public ownership and on a £15-an-hour minimum wage, forcing Andy McDonald to resign from the shadow cabinet.

The BFAWU had decided to recall its annual conference even before these policy retreats. The discussion to disaffiliate was prompted by the threatened expulsion of the union’s national president Ian Hodson. But the statement indicates that the Blairite policies of Starmer’s revived New Labour underpin the dissatisfaction of BFAWU members as well as the increasingly authoritarian methods that expel Ian Hodson and give more powers to right-wing MPs in order to shut the door on the possibility of another Corbyn.

But correctly, the BFAWU statement says: “The decision taken by our delegates doesn’t mean we are leaving the political scene, it means we will become more political and we will ensure our members’ political voice is heard”.

The discussion will now start on how to build that ‘political voice’, or a new ‘workers’ politics’, as the recently elected Unite general secretary Sharon Graham posed it. One that fights for a minimum wage of £15 an hour, repeals the anti-union laws of Thatcher, Major and Cameron that were retained by Blair and Brown, and also targets the town halls of Labour councils, committing to refuse to pass on Tory cuts. It is these cutting councillors alongside the Blairite MPs that form the backbone of Starmer’s regime.

Before the start of the Labour conference, Sharon Graham tweeted the main tenets of her ‘workers’ politics’, including opposing “any local authority, including Labour, if they attempt to force through cuts to jobs and services”. But it also committed to asking the Unite executive council (EC) “to support candidates who oppose cuts to Unite members’ jobs and services and councils and councillors who fight against them”.

But this wouldn’t include anyone in Starmer’s army of cutting councillors. And any rebel councillor who did look to stand up to the cuts would face the prospect of summary expulsion. All this poses Unite supporting council candidates outside of Labour next May.

In fact, they should go further and actively call for Unite members and reps to stand in the local elections. Such a stand could be the platform for the union to approach the BFAWU and other non-affiliated unions like the RMT – but also Labour-affiliated unions like the FBU as well as the CWU and TSSA – to call a conference on the issue of political representation for workers.

The CWU has a motion calling for such a conference going to their national conference in November, where delegates will be asking whether Starmer now supports the re-nationalisation of Royal Mail and BT that was policy under Jeremy Corbyn. The TSSA also passed a motion at its recent conference calling for members to be consulted on the union’s affiliation to Labour.

In the meantime, the BFAWU should join with the RMT in the Trade Unionist and Socialist Coalition (TUSC), as an interim step to any possible new formation which may develop in the future. This could include taking part in local People’s Budget campaigns to fight for what working-class communities will need from their councils post-Covid, rather than what the Tories’ austerity policies will demand.

Such bold moves by the left-led unions would build on the BFAWU’s decision and immediately begin to offer an alternative to working-class people. The potential would be huge. At Labour’s conference, Starmer said that “our politics is so small”, but under Corbyn’s left leadership Labour grew to over 600,000 members, and many more were mobilised to campaign for the more radical 2017 general election manifesto that nearly pulled off a shock victory.

Starmer’s pro-big business agenda is inevitably a turn-off to those looking for a programme and party that can face up to the Covid crisis and the brutal bosses’ offensive. Allied to the Labour right’s witch-hunt of the left, over 140,000 have departed since Starmer’s victory.

A political vacuum is opening up as anger rises against the Tories and the instability that is developing, highlighted by the petrol shortage debacle. It is essential that the unions provide a voice for workers and “bring about real change to their lives”.

At the Labour Party conference Keir Starmer moved to decisively reverse Jeremy Corbyn’s policies and tighten the grip of the right wing on the Labour Party. Disgracefully, this was done with the aid of the delegation from the Unison public sector union, which is presently still affiliated to the Labour Party.

Following Starmer’s speech, McAnea made comments that do not at all represent the views of Unison members. As Starmer effectively abandoned Corbyn’s 2019 manifesto, she praised him for “offering just what the country needs after 11 years of Tory mismanagement”.

The Unison national executive council (NEC) meets on 6 October and Socialist Party members will be calling for the NEC, the highest elected body in the union, to disassociate itself from these remarks, and put out its own statement opposing the ruthless driving out of supporters of Jeremy Corbyn and the anti-austerity, pro-working class policies he stood for.

For years the Socialist Party has warned that the union’s affiliation has been used to back up and bankroll the right of the Labour Party rather than take union policy into the Labour Party.

A warning of the lengths the right will go to defend Starmer and Co was given on the 13 September, before Labour’s conference, at a meeting of the union’s national Labour Link committee, which oversees Unison’s participation in the Labour Party. The left had submitted motions against Starmer’s proposed rule changes and for Corbyn to be reinstated to the Parliamentary Labour Party. ‘Somehow’ these never made it onto the agenda. Despite this the meeting voted 11-8 to put them back onto the agenda but the leadership refused, with an unelected full-time official suddenly coming up with a new rule that a two-thirds majority was needed to get them back on.

It is clear that the recently elected new left majority on the NEC must take control of the union for the members, which means taking decisive measures against the bureaucratic machine that believes it has the right to run the union and not its elected members.

Railway bosses cook the books in another capitalist market failure

Unite health members say no to 3% and vote for action

Fighting for our future

Youth Fight for Jobs – why we’re marching on 9 October

Ten years since our 330-mile Jarrow March for Jobs

We have the right to breathe fresh air

Caffeine and capitalism – a symbiotic relationship

Time for labour’s shot across the bow

After Labour conference: Where next?

How living labour is expressed as commodity exchange-value