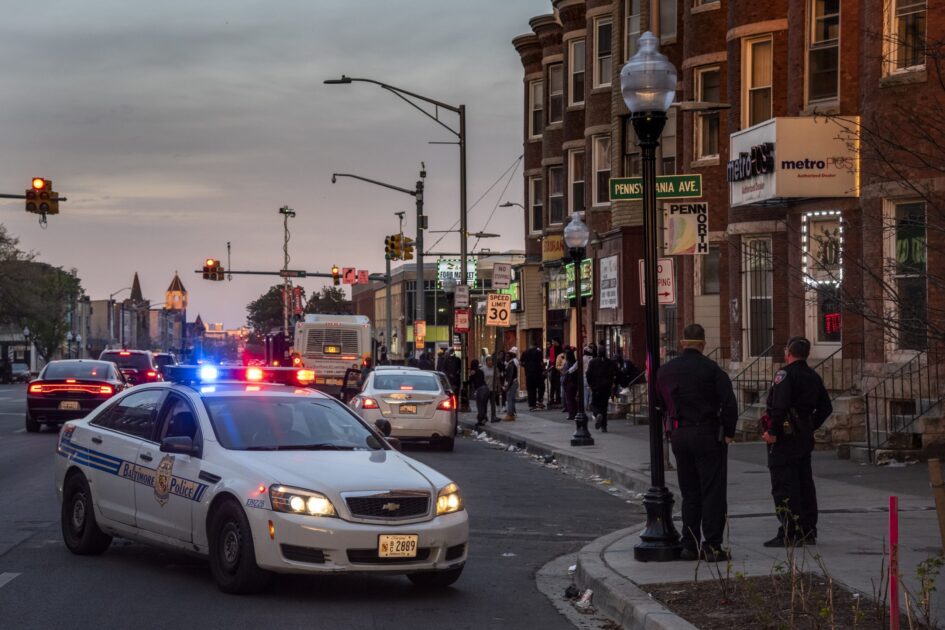 Crime and arrest data for 2021 provided to Battleground Baltimore by the Baltimore Police Department shows that last year was similar to 2020 and 2019, with homicides surpassing 300, the number of non-fatal shootings more than doubling that homicide number, and comparable numbers year-in and year-out on gun seizures, weapon possession arrests, and other categories.

A major difference between 2020 and 2021 was the conversation about crime. In response to the largest public demonstration against racist police violence in US history, last year was marred by fearmongering and specious claims of a nationwide “crime spike” pushed by police departments, pundits, and politicians—claims that were repeated by credulous reporters whose articles often acknowledged that, although the number of murders did increase, the larger “crime spike” did not exist.

Along with these “crime spike” claims was a common and easily disproved talking point that police departments had been “defunded,” allegedly leading to the “crime spike.” In reality, most police departments had their budgets increased, and budget reductions were fairly negligible. For example, Baltimore Police had their budget reduced by $22 million in 2020. In 2021, the police budget was increased by $28 million. With an annual budget of $555 million, which makes up nearly 30% of the city’s budget, that’s nearly $900 in police spending for each Baltimorean.

Meanwhile, the number of homicides and non-fatal shootings in Baltimore have remained incredibly high since 2015, as they were throughout the ‘90s and much of the 2000s.

In other words, Baltimore City has been experiencing a so-called “crime spike” for most of the past 30 years—and, occasionally, that spike has been even more pronounced.

Still, the 2021 data is illuminating, especially when compared to numbers over the past three decades. There is little correlation between homicides and non-fatal shootings and some of the most talked-about metrics for crime reduction. Higher numbers of arrests (including drug and weapon possession arrests) and gun seizures are not leading to less crime. The city has endured high homicide numbers even when arrests were also high, and increases and decreases in gun seizures—a major focus of police and Mayor Brandon Scott—do not align with decreases in murders and non-fatal shootings (or “failed murders” as cops sometimes call them).

That number is down from 16,204 in 2020, and 24,826 in 2019. Arrests have been steadily decreasing since 2006 when the police department, in part due to an ACLU lawsuit against the police over illegal arrests, began reducing its number of arrests. In the early 2000s, under Mayor Martin O’Malley and his “zero tolerance” policy—a strategy I once called one of the “most audacious experiments in mass incarceration in American history”—arrests skyrocketed. In 2003, for example, Baltimore Police made a staggering 110,164 arrests in a city of around 642,000 people.

Not long into the pandemic, Baltimore City State’s Attorney Marilyn Mosby announced a COVID-19 policy that her office would no longer prosecute a number of low-level crimes, including drug possession, which further reduced the arrest numbers. Last year, a study showed that reducing drug arrests and other low-level arrests did not increase crime in Baltimore, and the 2021 data also bears this out.

Britain and the EU: Inching ever closer to a trade war

Globalization and its big data: the historical record in financial markets

Who owns our data?