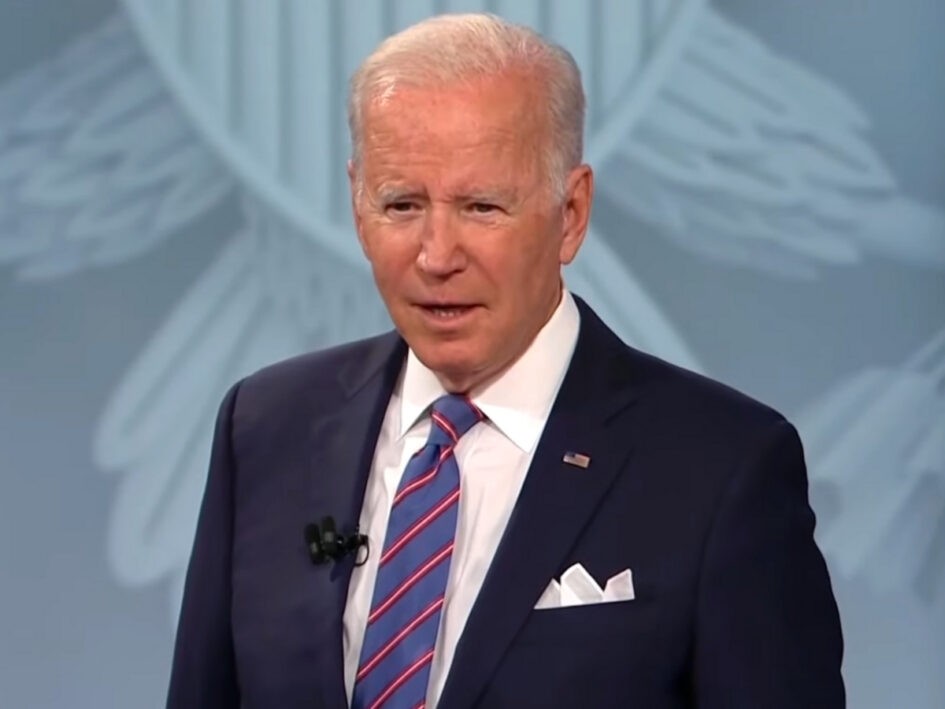 President Joe Biden came to Baltimore on Thursday night for a town hall hosted by Anderson Cooper and aired live on CNN. There, Biden fielded questions from realtors, college professors, college students, and other members (or future members) of the professional–managerial class, and mostly told them that much of what Americans want is going to take “several years.”

Free community college likely wasn’t going to happen soon but would happen later on, he assured the Loyola University professor who asked about it. Biden explained to a Morgan State University faculty member that he was busy with other concerns but would soon get around to maintaining voting rights and police reform.

“We need police officers to protect us,” Biden said. “I call for more money for police to go to community policing.”

At one point, Biden explained it would be “a reach” to get Medicare coverage to include dental, hearing, and vision.

This is how these sorts of cable news town halls usually operate. But in Baltimore, a majority Black city whose median income was, as of 2019, $29,943, the pomp and circumstance of the town hall and the lack of urgency from the president were especially stark. At one point, while shouting out Sens. Ben Cardin and Chris Van Hollen—who were in the audience—Biden mistook Kweisi Mfume, who was next to Cardin and Van Hollen, for Baltimore Mayor Brandon Scott.

Perhaps the town hall’s nadir was when a white, Republican, Loyola University student from Connecticut asked Biden how the United States would militarily keep up with China (although Biden’s tribute to Colin Powell, which took the form of an odd tale about the time they went to “the Secret Service race track” together, cannot go unmentioned).

Outside of Center Stage, where the town hall was held, members of CASA protested Biden’s appearance, calling attention to Biden’s immigration policies, which have not undone many of the most malicious aspects of the Trump presidency’s anti-immigrant policies.

“I am not free. I need freedom. I need citizenship now,” Yury Guardado, an undocumented immigrant and activist, chanted. “Now is the time, Biden, to fulfil your promise. Remember when you told us you wanted to make a better America? Give us citizenship.”

Besides the many local reporters and elected officials apparently giddy to be in the vicinity of the president and Anderson Cooper, the event also enabled some serious political sloganeering in Baltimore.

“I appreciate that Biden has taken the time to visit Baltimore. While he is here discussing his legislative agenda, I hope that the president will address why he has abandoned the bipartisan infrastructure deal which we spent months crafting,” Hogan’s statement said. “During his town hall, I hope President Biden will hear what I hear every single day: that the people of Maryland and the nation are completely fed up with the divisiveness and dysfunction in Washington.”

Earlier in the day, a group of pastors and lawyers that included high-profile civil rights attorney Benjamin Crump held a press conference calling attention to the ongoing federal investigation into Baltimore City State’s Attorney Marilyn Mosby. They did it, they told the Baltimore Sun, because Biden was in town.

The press conference was the latest salvo in a confusing public relations war Mosby has waged herself and by proxy against the FBI ever since it was revealed that she and her City Council President husband Nick were being criminally investigated for their taxes. During the presser, Mosby’s personal attorney A. Scott Bolden explained that the feds were now pursuing a perjury charge against his client, and from there, the familiar argument returned: Mosby is being unfairly prosecuted because she is a Black woman and a “progressive prosecutor,” not because she has actually done anything wrong in regards to her taxes.

“I’m reminded of Sojourner Truth, who faced persecution for her determination to speak truth to power and to stand up for the rights of Black women,” Baltimore City NAACP President Kobi Little said at the press conference. “The persecution must stop.”

As Battleground Baltimore has reported, the saga of Keith Davis Jr. deeply complicates Mosby’s “progressive” bonafides. Davis was shot by police in 2015 then later charged with a murder police said was tied to the gun police found on Davis after they shot him. Davis has been tried four times for the same murder—two trials were hung juries and two were guilty verdicts later overturned—and will go to trial for the fifth time, for the same murder, next year. Activists led by Davis Jr.’s wife Kelly have worked to call attention to the case and Mosby’s role in allowing this ongoing prosecution to happen, as well as her office’s use of questionable witnesses and previously undisclosed evidence to try and secure a conviction.

Kelly Davis noted that Davis Jr. actually had a pre-trial conference the same day as this press conference about how Mosby, the city’s top prosecutor, is being “persecuted.”

“Keith also had a hearing this morning, where prosecutors are still going forward with this vindictive sham of an attempted murder charge!!! While @AttorneyCrump @KobiLittle are out here playing captain save’em!! Prosecutors still lying about filing these charges a year later,” she tweeted.

“I’ve been quiet #onhere but enough is enough,” McKesson tweeted. “Mosby is not ‘under attack’ & this framing has allowed her to avoid any accountability for the decisions that she does not issue press releases about. This press conference today is political cover and is offensive.”

Maryland NAACP President Willie Flowers said during the press conference that the NAACP will be encouraging its members to donate to the Mosbys’ legal defense fund. As local news channel Fox45 noted, Marilyn Mosby makes $238,772 a year and Nick makes $128,583 a year.

In other Mosby news:

Thread of the week: @melissa_schober on school cops

Tweet of the week: @DanRodricks on the apparent end of chivalry

“Just held the City Hall door open for not one but three women. Not one said thanks. Thanks must be so old school. I really need to get up to speed,” Baltimore Sun columnist Dan Rodricks tweeted on Oct. 18 to enough mockery that he temporarily locked his account. “Today’s main character has arrived,” MEL Magazine said when they quote-tweeted Rodricks.