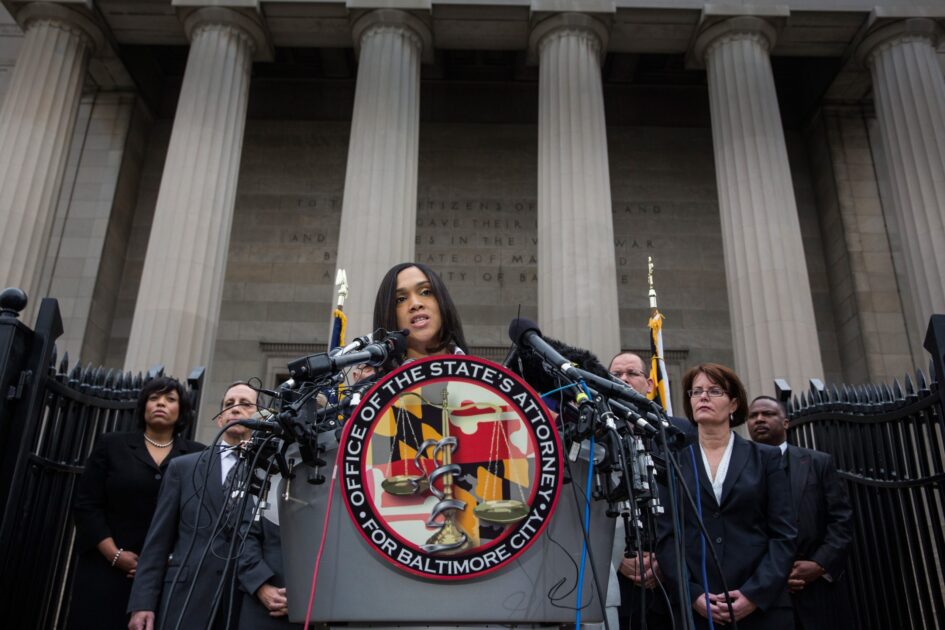 Baltimore City State’s Attorney Marilyn Mosby was federally indicted yesterday. Mosby has been charged with two counts of perjury and two counts of providing false information on a mortgage application.

According to the indictment, Mosby requested that she be able to withdraw money from her retirement, which was allowed under the 2020 CARES Act if the person withdrawing “experienced adverse financial consequences” during the COVID-19 pandemic. The indictment notes that Mosby was making a salary of nearly $250,000 in 2020 and had received a $10,000 raise since 2019, suggesting that she was not experiencing economic hardship during the early, heady days of the pandemic.

The indictment claims that Mosby, when she applied, did not mention that she owed the federal government a little over $45,000 in back taxes. Moreover, according to the indictment, Mosby claimed that she was the primary resident of one of those homes for at least one year, which allowed her to receive a lower mortgage rate. Although she said she would be the primary resident of one of the Florida homes, she had already worked out an agreement with a rental management company to rent the place out.

In short, the indictment alleges that Mosby made claims of economic hardship that her finances contradicted, and, using COVID-19-related relief, drew nearly $100,000 out of her retirement to purchase two vacation homes in Florida, each worth almost half-a-million dollars—one of which she later sold for a $150,000 profit and neither of which were likely to have been her primary residence given her position as an elected official in Baltimore City.

Mosby’s husband and Baltimore City Council President Nick Mosby has not been indicted.

Last year, it was revealed that the Mosbys were both under federal investigation for a number of issues related to their taxes. Information on the nature of the investigation was scant, but the fact that there was an investigation at all echoed the past few years of local corruption in which the federal government investigated and charged former Mayor Catherine Pugh, former State Delegate Cheryl Glenn, former Baltimore Police Commissioner Daryl DeSousa, as well as a number of Baltimore Police Department detectives involved in a criminal conspiracy, with crimes.

In response to news of the investigation, the Mosbys immediately mounted a brash public defense that included press conferences, Black establishment leaders (both local and national) voicing public support, and calls to donate to their legal defense fund. The Mosbys did not address any potential conflicts of interest that this sort of fundraising may create. That means that the Mosbys, while soliciting legal defense fund money from wealthy Baltimoreans, will continue governing as usual, and residents should simply trust that such donations will have no influence at all on their official decision making.

All this is on top of the conflict of interest that persists by nature of the married couple’s respective positions within the larger apparatus of public governance: Nick Mosby, the city council president, approves the budget for Marilyn Mosby’s office.

The continuing argument from the Mosbys, and their defenders among the city’s elites, has been that the Mosbys are under attack because of their progressive approach to governance. This aligns with Marilyn Mosby’s national profile as a so-called “progressive prosecutor” who, back in 2015, had boldly charged six officers for the death of Freddie Gray, a Black man who was chased by police, put in a police van, and fatally injured. Locally, however, Marilyn Mosby’s “progressive” reputation has been up for debate. Although her bonafides as one of the rare prosecutors to charge cops for a police killing matters to many (and for some Baltimoreans, will always define her), none of those six officers were found guilty.  Ultimately, Mosby dropped the charges, some before even going to trial.

At the same time, Mosby has been the driving force behind the ongoing—and, many claim, malicious—prosecution of Keith Davis Jr., a Black man shot by police in 2015, later charged with a murder, and tried by Mosby’s office four times so far. Davis’s many trials have resulted in either hung juries or convictions that were overturned (Baltimore Magazine’s “The Many Trials of Keith Davis Jr.” describes the scope of this case in great detail).

By the end of July 2016, a little over a year after Mosby charged them for Gray’s death, all of the cops had their charges dropped. Davis, meanwhile, is set to go to trial for the same murder for the fifth time later this year, nearly six years after the murder he is accused of committing.

Additionally, there have long been questions about Mosby’s knowledge of a corrupt group of Baltimore Police officers involved in the Gun Trace Task Force scandal—a years-long criminal conspiracy involving police officers robbing residents, dealing drugs, planting evidence, and defrauding the city of overtime pay. Mosby’s State’s Attorney’s Office had relied on the testimony of many of these corrupt cops despite lengthy and often quite public integrity issues, and many argued Mosby had looked the other way to secure convictions of the hundreds of Baltimoreans—primarily young, Black men—involved in the city’s underground economy.

Even after the Gun Trace Task Force cops were indicted, Mosby continued going forward with some of their cases. For example, a couple whose condominium was illegally broken into by some of the indicted cops, who claimed they found heroin in the couple’s condo and arrested them for possession, were still set to go to trial after the indictment.

Mosby’s office argued that the “overwhelming evidence,” which included nearly 400 grams of heroin, was enough to continue with the charges. Defense attorneys at the time were shocked. This was a case involving cops indicted by the federal government for lying, robbing, and stealing, who were shown to have illegally entered the couple’s home. Defense attorneys wondered how a prosecutor would definitively prove the drugs were not planted by cops accused of some of the most egregious misconduct possible. Mosby’s office eventually dropped the charges once the story made it onto local news.

In the years since the Gun Trace Task Force scandal, Mosby has been criticized for being reluctant to comprehensively dismiss charges or release those in prison for crimes based, in part, on the claims of a group of cops now sitting in federal prison for, among other things, making false arrests and lying on affidavits. More recently, Mosby’s office has been challenged by local defense attorneys for refusing to provide lawyers with a list she said her office has of Baltimore cops with integrity issues. This knowledge, Baltimore Action Legal Team has argued, puts many Baltimoreans accused of crimes at a disadvantage.

“In December 2019, [Mosby] identified a list of 305 officers with questionable integrity that could not be relied upon in a prosecution or a trial to obtain a conviction,” Baltimore Action Legal Team’s Matt Zernhelt told Battleground Baltimore last year. “I think it’s in the public’s interest to know what police officers have violated their trust and in any capacity.”

All of which is to say: Mosby’s indictment and her long-standing argument that she is being targeted by people in power because of her progressive policies raise a lot of questions. The prosecutor involved in Mosby’s indictment is Leo Wise, who was also one of two prosecutors who indicted the Gun Trace Task Force cops (as well as Pugh, Glenn, and DeSousa).

Just hours before Mosby’s indictment, a report based on a lengthy, independent investigation into how the Gun Trace Task Force scandal happened for so long was released. The 600-plus page report, titled “Anatomy of the Gun Trace Task Force Scandal: Its Origins, Causes, and Consequences”, is a staggering account of police corruption and misconduct involving law enforcement looking the other way or being complicit at nearly every level.

This afternoon, Marilyn Mosby held an in-person press conference in front of her office in which she said she was “innocent” of the charges in the indictment.

“I did not defraud anyone to take my money from my retirement savings,” Mosby said during the press conference. “I did not lie on any mortgage application.”

She did not take any questions from the press.

Battleground Baltimore: 2021, the year in review