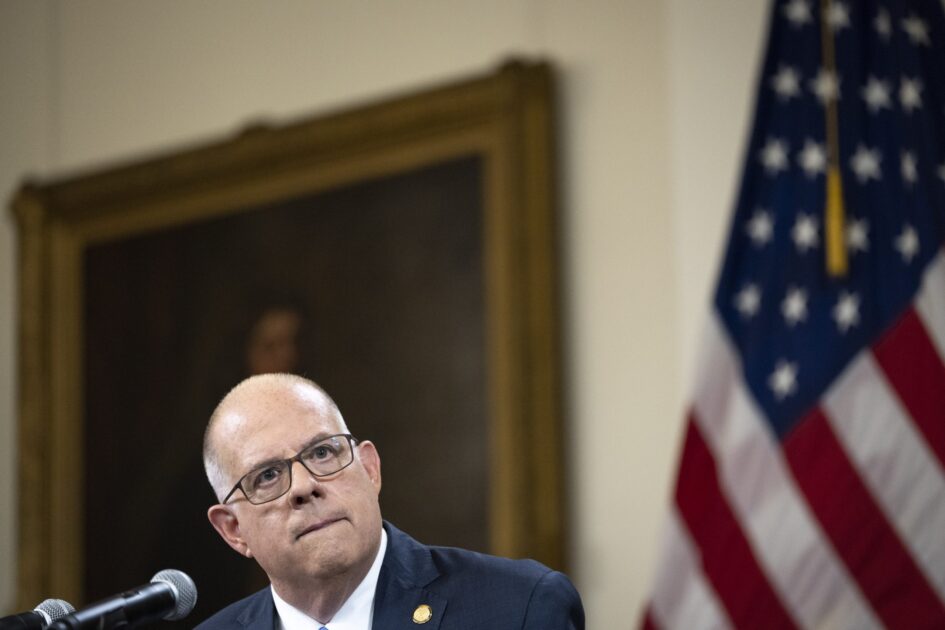 Both Maryland’s governor Larry Hogan and Maryland’s comptroller Peter Franchot are boasting about how they didn’t spend the state’s entire budget during the last fiscal year—a world-changing twelve months that left many Marylanders on edge about the pandemic and their economic futures.

It was announced this week that Maryland has a $2.5 billion surplus for last fiscal year. That’s more than 5% of the state’s $48 billion budget. That surplus, by the way, can be directly attributed to aid Maryland and Marylanders received from the federal government, which included three stimulus checks, extended unemployment benefits, advanced child tax credit, and more. And yet, Hogan is seizing on the opportunity to take a victory lap, framing the budget surplus as a result of his “fiscally responsible” Republican governance.

“I was elected governor to rein in years of out-of-control spending in Annapolis, to eliminate the $5.1 billion structural deficit we inherited, and to turn around our state’s floundering economy,” Hogan said in a press release. “This historic surplus is further proof we have done exactly that.”

Franchot, the state comptroller—who is running for governor against Hogan—also touted the budget surplus, though he focused on how that money could be used in the future as opposed to celebrating the fact that it wasn’t used at all.

“The state’s surplus is a once-in-a-generation opportunity to invest in programs that lift all Marylanders and help stabilize housing and other critical expenses for our lower- and middle-income families,” Franchot said. “In order to accomplish this, we should put most of the surplus in the state’s Rainy Day Fund and create a proper structure for addressing these urgent needs that our current systems are failing to do effectively. We must deliver this money quickly to those who need it most and not into the hands of fraudsters.”

Neither Hogan nor Franchot acknowledged how they could have spent that $2.5 billion during the last fiscal year, when communities desperately needed it. Baltimore Twitter, on the other hand, certainly did.

“So what you’re saying is we can afford the new HVAC systems in crumbling schools,” one Twitter user said, referring to the frequent heating and air conditioning problems in Baltimore City’s severely underfunded schools.

“A state surplus is not a good thing,” another Twitter user said. “The government exists to serve the needs of the people, a government is not a for profit business trying to stay in the black. there are plenty of needs neglected and unaddressed where this surplus should be spent.”

In response to a news story about the $2.5 billion surplus, Baltimore City Public Defender Todd Oppenheim called attention to a law that waived home monitoring fees for people with low income that went into effect in July. The law requires Maryland to pay for home monitoring for some defendants using federal pandemic relief funds. However, as Maryland Matters reports, “the state had made no payments on behalf of eligible Marylanders as of Sept. 20.”

“All this $$. And there’s $5 million allocated for pretrial indigent defendants’ home detention fees that was to be available on July 1,” Oppenheim tweeted. ”But we’re still waiting (w/court delays, hardships, bills adding up).”

Amid a push to divert mental health crisis response to trained mental health professionals and away from police, Baltimore City Councilperson Ryan Dorsey called attention to the fact that Baltimore City Schools sometimes send police to respond when students use keywords on their district-issued laptops that could indicate self-harm.

Khalilah Harris, acting Vice President for K-12 Education Policy at the Center for American Progress, was disturbed by the fact that students are being surveilled and said that surveillance could potentially lead to an encounter with the police.

“It is unconscionable for any school district to be surveilling their students through technology meant for schoolwork. Likewise, no school district should be inviting police to show up at the homes of their students, and particularly students experiencing mental health crises,” Harris told Battleground Baltimore. “Thrusting children into the school-to-prison pipeline who need medical care is a disgrace.”

André Riley, Director of Communications for Baltimore City Public Schools, explained the process to Battleground Baltimore. City schools, like many school systems around the country, use GoGuardian, a monitoring service that allows others to see how students are using their laptops.

“Clinical supervisors, school police, principals and designated school staff receive all GoGuardian alerts. During the school day, alerts are forwarded to respective school-based clinicians to respond. Students are assessed for lethality, parents are contacted, referrals are made, and resources are provided,” Riley said. “In cases where the student is not in school and contact cannot be made, wellness checks are conducted by school police and follow up with school-based clinicians.”

School police also monitor GoGuardian after school hours, including on weekends and holidays, and they can choose to do wellness checks, which, Riley explained, “include school police advising parents of the alert, speaking to students and making referrals as needed.” Riley also explained what happens after the initial response to the GoGuardian alert.

“School police also are able to conduct emergency petitions for those students who demonstrate at-risk behaviors,” Riley said. “During the following day, school-based clinicians follow up with students and families to further assess student support needs.”

For Schober, what Dorsey called attention to raised more questions than it answered: What happens when school police conduct wellness checks? Do they use screening tools? Do they follow up with the district?

“To me, this is a huge nightmare of accountability when you have unlicensed individuals responding to computer alerts unannounced,” she said.

When questioned, City Schools did not disclose how many times School Police have been deployed since March 2020, when students switched to remote learning and were given take-home laptops.

“School psychologists, counselors and social workers respond during school hours but after hours District Leadership has designated School Police to respond. They could work with outside agencies to have BCARS or other qualified mental health services to respond but nope,” Johnstone tweeted.

As Battleground Baltimore previously reported, Baltimore Police responded to what the department themselves labelled a “mental health crisis” back in August by fatally shooting 40-year-old Marcus Martin, who was armed but alone in his home, leaving his family searching for answers. Police responded because the incident happened in the evening and BPD’s crisis response team only operates between the hours of  11:00 am and 7:00 pm.

Dorsey learned of the School Police interventions after questioning City Schools about a citizen’s report that a School Police vehicle was parked outside of Power Plant Live, a hub for downtown bars and nightclubs, on a Friday night. In an email obtained by Battleground Baltimore, City Schools said School Police were investigating the Power Plant incident, and explained the unit was part of the Night Response Unit that monitors school facilities after hours. The email also explained that, since the pandemic, the Night Response Unit had begun conducting wellness checks on students: “When a student conducts a search related to self-harm, it activates ‘GoGuardian’ alerts, which are then funneled to School Police.”

This information raised even more questions for Dorsey and he emailed City Schools officials.

“Is there any evidence that 3-5 people … monitoring 150 buildings (~37.5 to 1?) is actually producing any result? I’d like to see data on that. Is there any monitoring of these activities?” Dorsey questioned in an email. “I’m actually floored that in 2021 we’re directly linking the mental health of students to a police response. That seems about as misguided as can be.”

For Dorsey, School Police monitoring students’ computers—and possibly arriving at a student’s home based on what that student has searched or typed—runs counter to the numerous conversations about implementing non-carceral solutions to social issues and providing trauma-informed care.

“Everybody in public service should undertake trauma-informed training, but school police should simply not exist,” Dorsey said.

In Baltimore, reported incidents of sexual assault are up nearly 25% since last year. That’s according to the Baltimore Police Department, which provided updates on crime statistics during a quarterly oversight meeting with the City Council held on Sept. 29.

Police told the Public Safety and Government Operations Committee that there have been 246 rapes reported in 2021. At this time last year, there were 196.

Pundits are always quick to weaponize Baltimore’s homicide rate as a national talking point—most recently, it has been pinned to a larger, fraught “crime spike” narrative, but not even police have expressed alarm regarding the rape numbers. The Baltimore Police Department’s Colonel Richard Worley said the number is higher because the department is getting better at documenting sexual assaults.

“Numbers are up because of better reporting systems,” Worley said. “It means rising rates but that’s what we want to do, we want to capture every single incident.”

As for making arrests in those incidents, the department’s success is unclear. When Councilperson Kristerfer Burnett asked Worley for the department’s clearance rate on rape cases, Worley said he did not have that information readily available but would get it soon.

At a hearing on March 31, 2021, the department provided clearance rate data that said police had not cleared any rape cases. When Burnett brought that up this week, Worley dismissed it as an obvious error. Burnett pushed back, reminding Worley that he had asked about the zero number back in March.

The clearance rate for non-fatal shootings in Baltimore is 26.7%. The national average is 26.1%.