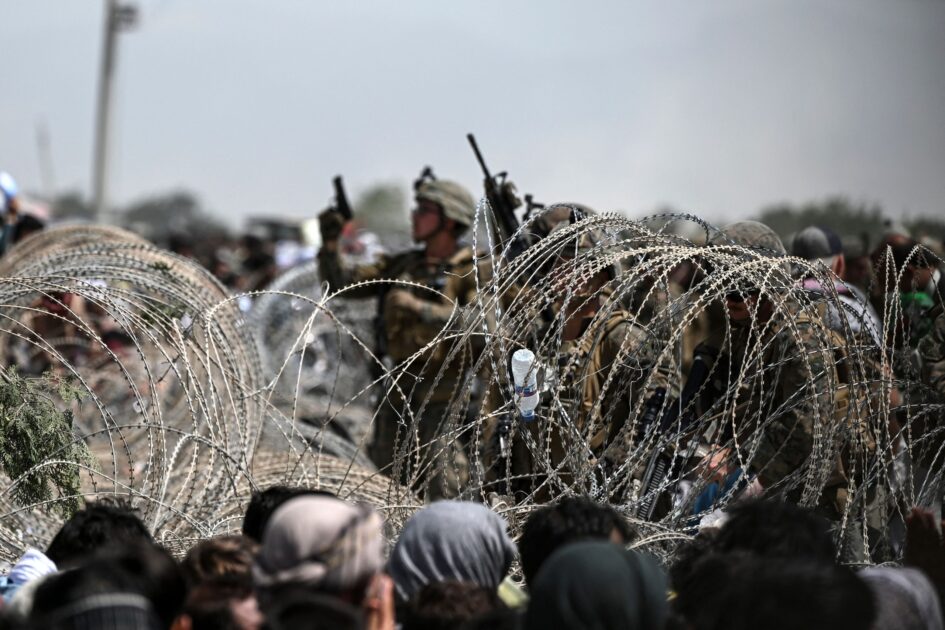 The lessons from the Taliban’s retaking of Kabul on Aug. 16, nearly two decades after the US invasion of Afghanistan, were not lost on local anti-war activists who have opposed the war since its outset.

“This war was a complete failure, it made things for the people of Afghanistan worse, and, potentially, the Taliban is more popular now than they were in 2001,” Ryan Harvey, a local activist and musician who organized against the war, told Battleground Baltimore.

The Taliban’s rapid ascent came despite over $2 trillion spent on the US war effort, and an enormous loss of human life. The press has focused on the American toll—2,448 US soldiers and 3,846 contractors—but Afghans paid a far higher price: 47,245 civilians, 66,000 Afghan military and police, and 51,191 opposition fighters have been killed to date, according to the AP.

The nation was gripped in a nationalist fervor after the attacks of September 11, 2021. 90% of Americans supported the war, and it wasn’t uncommon for those percieved as Muslim or “anti-American” to face assaults, harassment, or worse.

“We wanted to get ahead of any effort on the part of the US military to try and seek vengeance for the Sept. 11 attacks,” Mike McGuire, who organized against the invasion of Afghanistan in 2001, told Battleground Baltimore.

“The night that we started bombing Afghanistan, I went out and made a sign with some cardboard I found in the dumpster. I went out to the road. And I was immediately attacked by people with American flags,” said Harvey, also a founder of Civilian-Soldier Alliance, which supports anti-war soldiers and veterans working to build a GI resistance movement.

Opposition in Baltimore was organized by groups like the ANSWER Coalition and United for Peace and Justice. The first meetings drew 15-20 people of all ages and political affiliations, but swelled into record numbers over the next year in the lead-up to the war on Iraq, longtime activist McGuire explained.

Neoconservatives in the George W. Bush administration saw seizing Afghanistan as the first step in securing hegemony over the Middle East, and in undermining Iran, a country whose democratic government was overthrown by a CIA-backed coup in 1953. There were plenty of reasons to believe that invading Afghanistan would not go as smoothly as the Bush administration would have liked the public to believe.

“Afghanistan is known as the graveyard of empires, it’s rugged mountainous terrain, nobody, no foreign invader wants to stay there, has any history of staying there,” McGuire said. “It seemed foolhardy in the beginning and foolhardy at the end.”

Since the war began, the US military covered up its failures, corruption, and the undeniable reality the war was unwinnable, in order to justify continuing it, according to documents published by the Washington Post in 2019.

Instead of talking to those who have long warned of the Americas’ inevitable defeat, outlets like CNN have interviewed generals and the likes of former Bush and Trump administration official John Bolton, an architect of the even more deadly and costly invasion of Iraq. Bolton has long sought to launch a war on Iran.

“The media is still interviewing the same people that have been lying to four administrations plus the American public since this all started,” Harvey said. “We should be stressing now’s the time to learn from this, we can never do this again.”

This week, Maryland’s Republican Gov. Larry Hogan criticized what he called “the rushed and irresponsible withdrawal from Afghanistan that has enabled the rise of the Taliban” in a tweet. Hogan ignored the fact that a $2 trillion war effort failed to suppress the Taliban, who controlled most of rural Afghanistan in 2019.

Hogan went on to say the withdrawal “is a disgrace to the memory of every Marylander and American who lost their lives there fighting for freedom and keeping our nation safe.” There was no explanation of how killing tens of thousands of civilians and committing alleged war crimes keeps Americans safe, or how a bipartisan foreign policy consensus that props up brutal dictatorial regimes like those in Egypt and in Saudi Arabia promotes “freedom.”

Hogan later broke with other conservatives and said Maryland would welcome 180 Afghans who helped the US war effort, but for Harvey and many others, that’s not enough.

“That number is absurd,” Harvey said.

He noted the long history of US involvement in Afghanistan, which included supporting authoritarian figures and supplying weapons that fueled decades of conflict and civil war.

“We have an absolute obligation to take in more refugees than other people have,” Harvey said.

The viral images of women and children desperately seeking to flee with US forces departing Kabul don’t capture the vast number of refugees, Harvey, who has spent time with Afghan refugee communities in Greece, explained.

“There’s also millions of people who fled Afghanistan in the last 20 years,” he said, “many of whom are still stuck in limbo in Turkey, in refugee camps across southern Europe, and other neighboring countries. So, we’re only looking at the tip of the iceberg right now, unfortunately.”

“Citizens have the right to expect effective and honest City leadership,” the report reads. “Virtues that are best fostered when the government polices itself and initiates improvements in operational efficiency.”

According to the report, members of the OIG have investigated allegations of such things as fraud, bribery, theft, extortion, and nepotism.

The report also tracks notable cases that the OIG has investigated, including an officer with the Baltimore City Police Department who was misusing medical leave. The officer, the OIG reports, got the city to cover expenses for surgeries, physical therapy, and doctors’ appointments to the tune of over $300,000. At the same time, this officer was traveling and skydiving.

A joint investigation with the Baltimore County Inspector General’s Office resulted in the two offices identifying millions of dollars in waste related to Baltimore City and Baltimore County’s water system.

Just last week, an OIG investigation led to the termination of former Baltimore City police officer Edward T. Gorwell II. Gorwell was stripped of his enforcement powers after he killed a teen in 1993; however, he remained on the department’s payroll until this month.