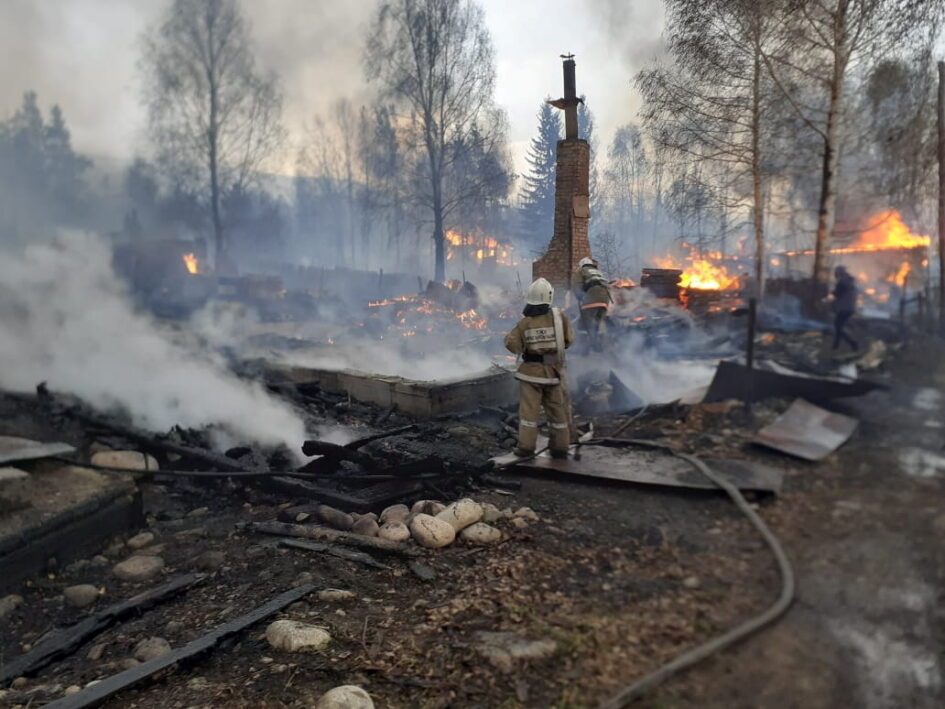 The BBC’s science and technology journalist, Chris Baraniuk, wrote back in January a distinctly ecohippie article celebrating the decline of human presence in the Eurasian steppes of Kazakhstan.

With the title “How the Soviet Union’s end sparked a grand rewilding”, the author appears to echo extinction rebellion’s rhetoric rejoicing in the fact that nature has rejuvenated, as millions of people were kept indoors during the lockdowns. It is quite fashionable to be “scientifically” misanthropic nowadays, and willing to highlight the so called “positive” effects of the pandemic that devastated human lives globally. It is a hideously insensitive and irrational argument, in the context of over 4.5 millions of deaths, that fails to address the responsibility of specific economic interests and the profit motive of capitalist exploitation. Conveniently for the current system, this attitude instead opts for blaming vague “anthropogenic” causes for all ecological catastrophes and to praise the “anthropause” as a respite given to the natural world, which magically takes care of itself.
It is of course easier for mainstream journalists to promote the bipolar credo “people bad/nature good” than to reveal how capitalism is sparking environmental degradation, or research the priorities that a socialist economy could serve in order to harmonise human development and environmental protection. Thus, Baraniuk finds it fitting to revel in the “abandonment of thousands of human settlements that collapsed into disrepair, over 2000 villages and livestock stations” in the steppes of the former Kazakh Soviet Socialist Republic. Baraniuk has swiftly made up his mind that the collectivised farms were “unsuccessful” and seduced by an idyllic depiction of flora and fauna, he concludes that the massive decline in human influence is great news for the wider steppe landscape and the habitat of the endangered saiga antelope. Only in passing, is he forced to admit that the collapse of the Soviet Union was not such great news for the human beings in Kazakhstan: “the removal of Soviet economic infrastructure had a huge impact. By 1995, GDP in Kazakhstan had fallen by 36%. Unemployment rose and the proportion of people living below the poverty line grew from 25% in 1992 to 43.4% in 1999”.
Despite the click bait nature and the imagery conjured by the article, the author cannot hide the calamitous destruction of a functioning agricultural system and has to reluctantly concede that the post-Soviet period has seen the spread of wildfires and the threat of increased environmental damage as a result of arson, speculation, illegal hunting of wild animals and anarchic re-cultivation of abandoned cropland for private profit.
Ironically, only four months after this article was published, in May 2021, there was a huge wildfire in eastern Kazakhstan that burned an area of 766 acres, killed two people and injured two others. Kazakh news reported that both arson and negligence were possible causes. So after all, landscapes cannot take care of themselves alone against capitalist abuse and the protection of an ecosystem takes something more than simply removing humans and letting natural rhythms take over.
A truly scientific, non apologetic to capitalism view actually reveals how Kazakhstan’s grassland areas have become a global fire hotspot, precisely as a direct consequence of the end of the Soviet system. Soviet researchers and administration knew very well and planned for the summer droughts accompanied by dusty storms and dry winds that are common in Kazakhstan (Gvozdetski and Nikolaev, 1971). During drought periods, the fire danger increases sharply and the number of wildfires occurring on wooded land is extremely high. An overall trend of increasing aridity of the climate of Kazakhstan has been observed for about half a century. Under the Soviets, systematic wildland fire protection was required by state forest and agricultural collectives. The fires usually occur in the early spring and in autumn, especially in dry years. However, recent research shows that the basic causes of wildfires today are illegal and uncontrolled agricultural burning and violation or absence of fire safety.
Research also indicates that the steppe vegetation, described so romantically in the article, can in fact promote the origin, distribution and development of wildfires especially in hot and dry weather, and that the control of fires is hampered by the absence of rocky ledges, stony man-made material and other constructions that can act as natural obstacle to further fire spread. Once more then, it is proved that human influence does not only have negative effects, as Mr Baraniuk would have us believe.
In 1997 extremely large, catastrophic fires that affected an area of 216. 950 hectares in Kazakhstan, the basic reason was the breach of the fire prevention rules. Under the Soviet collectivised farm system, which Baraniuk hastily dismisses as unsuccessful, strict fire protection strategies were in place and aimed at prevention, detection and suppression for fire-prone areas. Therefore, it is not a coincidence that the largest number of wildfires in Kazakhstan occurred in the 1990s and grew exponentially during the last 30 years (Arkhipov et al. 2000). The costs of these fires exceed 400 million $US, but we expect no debate of how successful capitalist management in modern Kazakhstan is, by Mr Baraniuk.

The superiority of the USSR in fire prevention, natural protection and scientific implementation
What we see time and time again, in Kazakhstan as in this summer’s fires across Europe and North America, is the inability of the capitalist state mechanism to prevent and deal with crises. We witness how under the capitalist system, civil protection is degraded and defunded. Fire protection is not funded because it is not profitable, preventive interventions in ecosystems are neglected while tragic shortages in planning and staffing of fire services reflect neoliberal austerity.

On the contrary, in the Soviet Union, tackling fires was a central point of civil protection. From the very second day of the October Socialist Revolution, on November 8, 1917, the 2nd All-Russian Congress of Soviets ratified the Earth Decree. Natural wealth became the property of the people and any attempt to damage public property was considered a very serious crime punished by the revolutionary court.
Lenin ratified a decree “On Forests”, which divided forest areas into two categories: a) protected, where no human intervention was allowed, and b) managed, where designed and under state supervision – their exploitation (eg timber, irrigation, etc.) was allowed for the benefit of the people and their needs.
On April 17, 1918, Lenin signed a decree establishing the “Fire Protection Organization.” The decree spoke of the need for proper and systematic implementation of fire protection measures and drew attention to the importance of developing prevention services, enacting fire protection rules and directives, as well as creating infrastructure for effective response to fires.

In the context of the central planning of the economy, special emphasis was given to the financing of high level training of professional fire-fighters, but also the continuous scientific research for new methods of prevention and management of fires. Under the auspices of the USSR Ministry of Internal Affairs, the All-Union Scientific Research Institute for Fire Protection was organized, and voluntary fire-fighting teams were set up throughout the Soviet Union (in the 1960s, there were 4 million volunteers working in the country).

It is worth quoting some research data (November 1964) of the British Fire Protection Research Agency:

“In 1962, a total of 19,500 small, medium and large fires were recorded in Soviet territory. The corresponding number in Great Britain in the same year was 167,000 fires.

The Kazakh Soviet Socialist Republic benefitted from the policies of the All-Union Scientific Research Institute of Fire Protection, a network of territorial fire-technical stations conducting research work in the field of fire safety, as well as educational institutions that trained fire engineers and technicians. Some ministries and departments (for example, the Ministry of Railways, the Ministry of Forestry) had their own departmental fire protection. At industrial enterprises and construction sites, in institutions and organizations, collective and state farms, volunteer fire brigades were organized from workers, employees and collective farmers.
The population was attracted to the prevention of fires by republican, regional and other voluntary fire-fighting societies. Being red absolutely meant being green and caring about nature.

Meteorological forecasts were compiled in advance , according to which it was possible to predict the strength and geography of fires, equipment for extinguishing, fuel for equipment was brought in.
In the USSR a single entity was responsible for forest fires – Goslesokhrana, in whose staff there were about 75 thousand foresters. Professional foresters regularly patrolled the territory and either quickly extinguished the fire, or managed to protect the settlement from the fire.
With the end of the Soviet Union, Goslesokhrana was completely liquidated, and its functions were distributed between regional authorities and private tenants.

Contemporary Russian scientists also have studied the history of forest fires in Kazakhstan and explained their cause, Liter.kz reports.
Kazakhstan has long attracted the attention of researchers at the Faculty of Geography of the Lomonosov Moscow State University. Studying the surge in fire statistics in the semi-deserts of Eurasia and looking at the areas of burnt land using satellite images, scientists had to revise all methods for analyzing the data, since in most cases they were developed to look into forest fires, not steppe ones. Their analysis showed that with the collapse of the USSR, the livestock population in Kazakhstan decreased. If in Soviet times animals ate all the grass on this territory, now there is no one to do it. “Dead grass remains on the ground, forming a kind of combustible carpet,” – said the researchers. Again this is a more complex situation than BBC attempts to describe and even more unregulated private farming and animal poaching is gaining momentum.
It is evident that capitalism follows exactly the opposite path from that followed in the years of the Soviet Union; concentrating the land in fewer and fewer hands, promoting a policy of privatization, outsourcing forest management and fire-fighting services to private companies, dismantling and degrading responsibilities of the fire brigade only in the extinguishing of fires, rather than the prevention. The capitalist system and those who serve it for profit, however hippie-dippie they may sound, will never truly prioritise the balance between man and nature and never invest in genuine ecological education, social consciousness and civic responsibility.