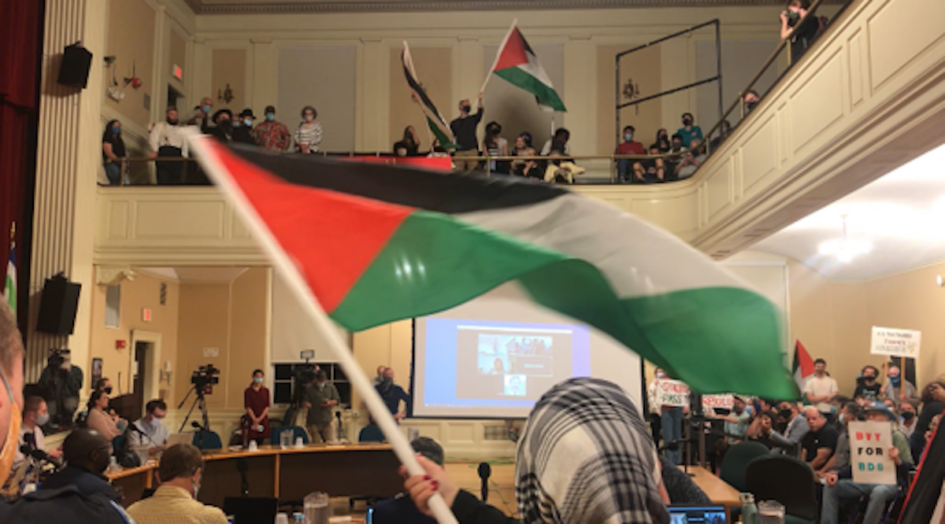 Vermonters for Justice in Palestine is a grassroots organization that has waged a boycott over the past decade of Vermont-based company Ben & Jerry’s for their business ventures in Israel. Ben & Jerry’s painted themselves as a “beacon of social justice” while selling their ice cream in the occupied territories of Palestine, scooping cones for the Israeli Defense Forces and turning a profit from apartheid.

VTJP along with local racial justice activists and union leaders created the Palestinian Solidarity Resolution, which simply calls on the city of Burlington, Vermont to “express its solidarity with the Palestinian people, [and] condemn anti-boycott legislation” as unconstitutional, evidenced by recent court cases like Abby Martin v. Georgia.

While the Palestinian Solidarity Resolution is the most recent work of VTJP, they are locally known for their decade-long BDS campaign against Ben & Jerry’s.

On May 15, after bombings in Gaza earlier that month, organizers from VTJP, the Party for Socialism and Liberation, Jewish Voice for Peace and other local organizations held a rally for Palestinian solidarity that drew well over 300 protesters from around the region. The rally sparked a new social media campaign calling attention to the Ben & Jerry’s boycott which went viral on Twitter and Instagram. The social media campaign called out Ben & Jerry’s for their factory in Israel and for hypocritically branding their ice cream as “progressive.”

Ben & Jerry’s social media was silent for over a month, then issued a statement in response to the BDS campaign. They promised to cease sales only in the “Occupied Palestinian Territory” by 2022 — though their factory would remain in “Israel.” This rhetorical distinction between Israel “proper” and the “occupied territories” of Gaza and the West Bank intentionally disguises the historical fact that the entirety of the state of Israel is a settler colonial project, beginning with “the Nakba” or “the Disaster” in 1948. Since then, Israel has been perpetuating war crimes and apartheid according to international law and independent observers.

In response to Ben & Jerry’s statement of divestment, Israeli state officials posted videos of themselves throwing their Ben & Jerry’s ice cream away. Even former prime minister Benjamin Netanyahu made a comment on Twitter saying “Now we Israelis know which ice cream NOT to buy.” Conservative and Zionist business owners around the world made social media posts pulling the ice cream from their shelves. U.S. state governments like Arizona, Texas, and New Jersey have said they will divest from Ben & Jerry’s parent company, Unilever, potentially severing millions of dollars in state contracts.

The struggle made a difference

Although the company says otherwise in their statement, the BDS campaign against Ben & Jerry’s is what pushed them to a breaking point. The success of the BDS campaign was won by grassroots support and local organizing.

At the September Burlington City Council meeting, several council members spoke about the “hundreds” of similarly worded emails they received the weeks leading up to the vote, from “constituents” opposing the resolution. Automated emails or social media blasts from bot accounts is a well-known tactic of groups like Israeli American Council and Israeli American Civic Action Network.

IAC’s Assaf Magen was present at the city council meeting and spoke during public testimony at the event. His presence sent a clear message to local activists that international and national pro-Israeli organizations are paying attention to what is happening in Vermont.