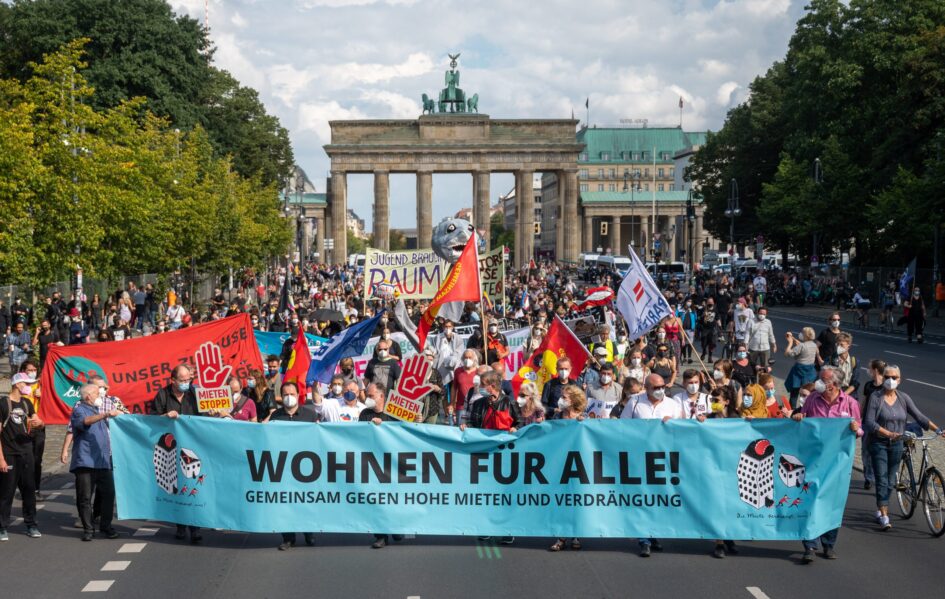 Most international coverage of the German elections is focused on who will replace Angela Merkel after her 16-year term as chancellor ends, but for everyday Berliners, just having the resources to pay the rent is a bigger concern. Berlin’s efforts to lower the fast-rising rents in Germany’s capital city have led to a referendum which could expropriate and socialize almost a quarter of a million apartments primarily from Deutsche Wohnen, the largest real estate company in Europe and one of the largest companies in Germany.

After years of rising rent forcing many Berliners out of the city, activists led by Deutsche Wohnen & Co Enteignen (Expropriate Deutsche Wohnen, or DWE) received nearly 350,000 signatures from Berliners and managed to force a vote on whether to allow the expropriation of housing owned by landlords with over 3,000 units on the Sept. 26 election ballot. While this referendum faces challenges, according to a poll taken in late August, it appears poised to succeed with over 47% support, compared to the 43% of Berliners who oppose it.

Christa Lindenberg, a lifelong Berlin resident who attended the Sept. 11 demonstration in support of the referendum, which organizers estimated drew over 20,000 participants, pointed out the sense of frustration many Berliners have with the rental market. “Berlin is the city in Germany where the rent went up 10-20% or even more, but the wages didn’t go up,” she said. “If you are new or you want to rent a new flat it is almost impossible.”

While the movement to expropriate large real estate companies, who have made a fortune speculating on the housing market and causing rent increases over the past decade, has been active in Berlin for years, ironically it was the German Supreme Court’s ruling to overturn Berlin’s Mietendeckel (rent cap) law that was the catalyst for the current referendum. While this law would not impose a rent cap, DWE volunteer Dennis Rahmel thinks that it would still have a dramatic impact on rent prices in the city. “Prices would go down in the expropriated apartments, which would change the rent not [just for the socialized apartments] but for other people as well, no matter if they were in public apartments or not,” said Rahmel. “It would also mean that society could show that there is some power against investors, against big capital, and that housing is a human right… it would be a big sign for other cities, too.”

Kim Meyer with Bündnis gegen Verdrängung und Mietenwahnsinn Berlin (The Berlin Alliance against Displacement and Rent Madness) thinks that it will also discourage the kind of rampant speculation (and subsequent rent hikes) that real estate markets around the world have seen.  “Since the houses will be bought back below the market price, investing in Berlin real estate will become less profitable and less interesting for financial capital. This should have some effect on rent prices,” she said.

While litigation, such as the kind that met the rent cap law, is likely to challenge this referendum if it passes, it is less likely to be successful because the German constitution specifically allows for such appropriation. “[Unlike] Mietendeckel, socialisation is a constitutional right in Germany. In fact, many houses were already expropriated (and afterwards destroyed) in order to build a motorway around the city,” said Meyer.

Berlin used to have much more publicly owned housing, but since reunification of East and West Germany in 1990 more than 200,000 units have been sold to private equity and hedge funds. Stefan Matke, a self- described Communist Party activist, points to housing during the era of the German Democratic Republic (GDR, or East Germany) as a better example of rent fairness. “All of Germany is now capitalistic Germany, and the flats are very expensive. We would like to have it like it was during the GDR when the flats were all cheap and public,” he said. “When we had GDR and Federal Republic [West Germany], the capitalist Federal Republic also capped the rent, but now there is no GDR and nothing stops the capitalists.”

The referendum would still face some challenges even if passed, because the Berlin Senate would have to enact the laws and contracts necessary for expropriation. Fransiska Gaffey, the candidate for mayor from the moderate Socialist Democratic Party (SPD), has spoken out against the law and said, “For me, the subject of expropriation is already a red line. I don’t want to live in a city that sends the signal: This is where expropriation is taking place.”

However, Meyer and other organizers think that the reason so many of the city’s establishment have come out against the law is because of its possible effectiveness in solving the housing crisis—not only in Berlin, but as an example to cities all over the world. “It might inspire people to question the current sellout of their land and cities to global investors and to [investigate] compulsory purchases of necessities by their administrations, like housing, water wells, power plants, et cetera, and to fight for their human right to housing,” said Meyer.

Minneapolis referendum on policing: Vote No on Question 2