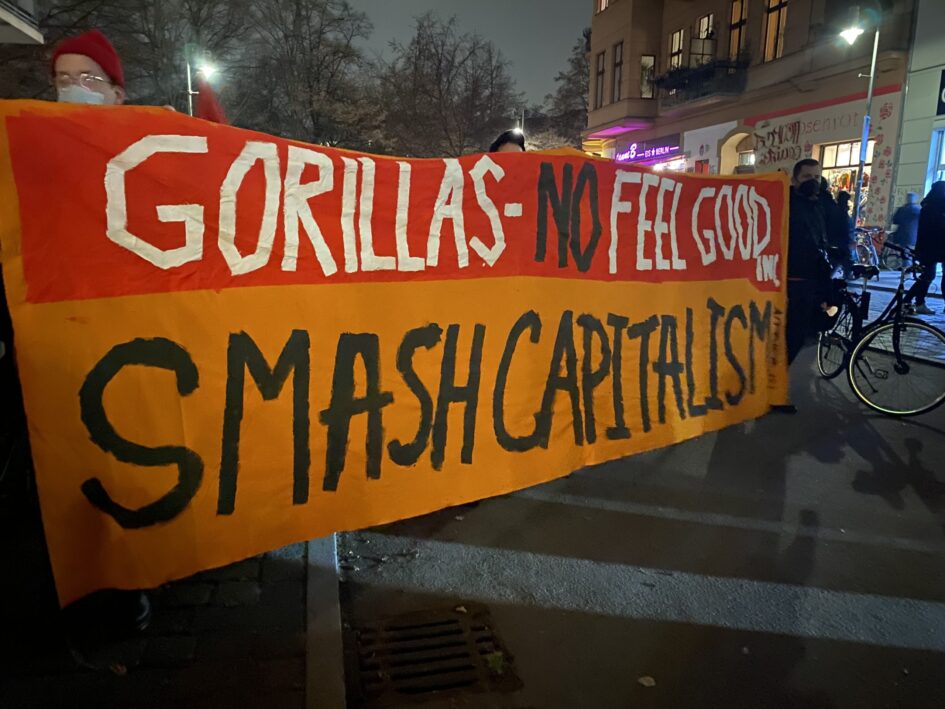 Workers at Gorillas, the Berlin-based grocery delivery service, won a major court victory on Nov. 17 in their ongoing fight to organize. The workers held a demonstration the evening before the court hearing, during which they were joined by fellow workers and supporters from all over the city, as well as activists from the Deutsche Wohnen Enteignen (DWE) campaign, who recently won a resounding victory in their referendum to socialize a large part of Berlin’s housing stock. “They are trying to learn from the US [gig economy] model and implement it here… and we need to do everything to stop that,” said Mowa, an activist with the DWE campaign.

Joey Ridge, a rider for Gorillas, gave a rousing speech at the demonstration wherein they laid out what it was like to be a delivery rider and compared it to the struggles of all precarious workers in Berlin. ““[Precarious workers] all understand with our own bodies the cost of an efficient, sanitary, optimized society,” they said.

The Gorillas workers’ fight has drawn comparisons to the successful DWE campaign, which also used many of the same tactics in their push for a housing referendum that demanded the socialization of over 200,000 housing units in the city. In particular, both campaigns have considered the concerns of migrant workers to be paramount. “It’s the same struggle because if you get shitty pay and you have a high rent, then you can’t afford living,” said Mowa. “The people who come here as migrant workers for shitty wages are the ones most affected by racism in the housing market and most affected by higher rents.”

Hugo Mills, an activist with Right to the City, the English-language arm of the DWE campaign, told the crowd, “We see that the business model of new, venture-capital-backed companies like Gorillas rely on intermittent work, union busting, precariousness of wages, and a distinct lack of legal recourse. Meanwhile the business models of corporate landlords in Berlin are pretty similar—they rely on intermittent short-term lets, precariousness of housing, and a distinct lack of legal recourse.”

Gorillas has been plagued with complaints from their riders and warehouse workers since the inception of their business in May of 2020. These complaints about safety and the capricious firings of workers, many of whom are migrants, led to Gorillas workers launching multiple wildcat strikes. Wildcat strikes are rare in Germany, where large trade unions are typically involved in all strikes. Gorillas initially said that there would be no retaliation against these workers; however, in October, numerous workers who participated in the strikes were laid off along with many migrant workers whom Gorillas refused to assist by extending their work visas.

“I worked with Gorillas for almost ten months… in February we did a strike because the work conditions were really bad and we didn’t want to risk our lives for €10.50 an hour. Since then, we have been organizing all the time, better and better,” said Fernando, a former Gorillas rider who attended the Tuesday demonstration. “The last strike we did was in October… because we were asking for the same things: proper equipment, safer equipment, the same story. Instead of dealing with this, instead of negotiating with us, Gorillas decided to fire us.”

Management’s crackdown on organizing has also extended to the courtroom. Gorillas tried to stymie workers’ efforts to unionize by first splitting their company into two separate entities (the central office and the warehouses), then later pursuing a franchise model in which each individual warehouse would be its own entity and would have to organize separately, a common union-busting tactic.

Berlin’s Labor Court rejected this plan after Gorillas refused to provide any information on how the newly formed companies would operate separately, thus allowing the workers council (i.e., union) election to proceed. Gorillas then made a last ditch effort to stop the election by challenging the formation of the electoral committee—this move was rejected by the Berlin labor court yesterday. However, even after these losses, Gorillas workers allege that management is still involved in union busting.

Damiano Valgolio, a Berlin Senate member from the Die Linke (The Left) party who was at the demonstration to show support for the workers, told TRNN, “I think this is a scandal that a company like Gorillas fires so many employees and obviously with the objective to [obstruct] their fight for better working conditions and better payment, and to [obstruct] the rights to build a workers council.”

Valgolio thinks that the Gorillas workers should join Verdi, a large German trade union with over two million members. However, because of Verdi’s inflexibility when dealing with precarious workers and migrant workers, there has been resistance to doing this by some Gorillas workers and their supporters. Verdi, for their part, and out of fear of possible liability, have been reluctant to embrace the tactics of the Gorillas workers, particularly the wildcat strikes.

“The Gorillas Workers Collective is some of the most dynamic vibrant organizing that has been happening this year in Berlin, and I think it is a really important learning process for Verdi as well. Because Verdi is one of the largest trade unions in the world, but it is quite new to the whole gig economy and platform economy, and I think it’s not a secret that there need to be better relationships,” said Yonatan Miller of the Berlin Tech Workers Coalition. “[Verdi] needs to invest a lot more in social movement organizing and not just a consultative role for the end of a collective bargaining position.”

The Gorillas workers’ non-traditional organizing techniques have drawn a lot of attention and support from activists around the city. For instance, Jacqueline K. Singh with Workers Power Germany was drawn to the demonstration because Gorillas workers have expressed (and are looking to build) solidarity with all workers in similar positions. “One of the most interesting things about it is that it was organized by the workers themselves,” said Singh. “The solidarity between the workers in one sector, which is a precarious sector in Germany and is not well organized by the trade unions in Germany [so there is a chance] for the workers to organize themselves.”

Dan, who attended the demonstration with Linksjugend [‘solid], drew parallels between the situation with Gorillas and the numerous other start-up delivery jobs. “This whole section of the economy relies on extreme exploitation of migrant labor,” he said. “There’s a lot of these places [that] pop out of nowhere and they have a promise that you deliver food in ten minutes and obviously that relies on riders being very unsafe.”

Fernando, who got a job with foodpanda (another delivery company based in Berlin) after being fired from Gorillas, agrees. “It’s the same thing, actually: foodpanda owns [a part] of Gorillas now, so they are going to use the same politics that they are playing right now at Gorillas,” he said.

The riders in Berlin see their fights for a safe and healthy workplace as intrinsically tied to each other. Duygu Kaya, who emceed the demonstration, talked about the resistance of Gorillas workers to the isolation that is often endemic in new economy jobs. “They transferred organized workers into desolate corners of the city to break our unity, but our unity is our price for the fight we have put up, for the pain and discomfort that we have endured,” said Kaya. “Our unity is our hope—let’s keep the bosses off of it.”