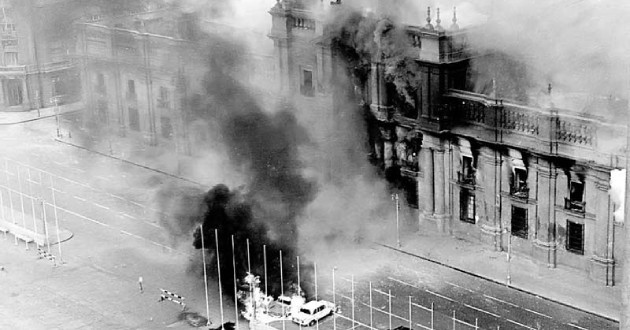 Thanks to newly declassified files, Chilean exiles have discovered that the same country which gave them refuge, was involved in the coup which changed their lives forever. Carole Concha Bell reports.

A group of Chilean exiles in Australia have responded to recent revelations that the Australian Intelligence Agency (ASIS) were key players in the dirty war against President Salvador Allende, in the lead up to the US-backed military coup of 11 September 1973.

Newly declassified files, requested via a succession of freedom of information petitions on behalf of Canberra academic and political analyst Professor Clinton Fernandes, reveal that ASIS installed an office in Santiago between 1970 and 1973 at the decree of the CIA. This was part of the quest to undermine the socialist leader and remove the ‘Marxist threat’ posed by his radical programme. The eventual coup had devastating effects. It violently purged the democratically elected President and saw his supporters targeted, killed and exiled by the military junta, headed up by General Augusto Pinochet who then ruled Chile with an iron fist until 1990.

Although the contents of the newly released documents are damning, there is more to discover. Files have only been partially released and Fernandes and Chilean campaigners want them to be completely declassified in order to expose the whole truth about Australian intervention in the lead up to the coup and quite possibly the early years of the Pinochet regime.

They feel they were duped into thinking that Australia had behaved in a humanitarian way towards them, by allowing them into Australia, and yet Australia may have helped unleashed the terror which brought them here

Chilean exiles in Australia, represented by a core group of 70 signatories, have written to the Minster for Foreign Affairs, Marise Payne. Their key demands include an apology on behalf of the Australian State for the devastation wreaked upon the Chilean people and further declassification of the files.

Adriana Navarro is a Chilean exile based in Sydney, Australia. The human rights lawyer is one of the signatories to the letter. She told New Internationalist: ‘We have attempted to give a voice to the families who were given refuge in Australia after the coup d’état and who are deeply hurt and disappointed on finding out that Australia was involved in that same coup which changed their lives forever.

‘Those families are distressed; they feel they were duped into thinking that Australia had behaved in a humanitarian way towards them, by allowing them into Australia, and yet Australia may have – at least to some extent – helped unleashed the terror which brought them here. These families have been let down by the Australian government and they demand to know how deep that betrayal goes.

‘All records relating to ASIS intervention in Chile must be released. We are not naïve; we understand that most nations were collecting intelligence at the time of the Allende government. That is entirely different to having Australian spies actively assisting the CIA in toppling Allende’s government and in destabilizing Chile.’

Paradoxically, alongside providing asylum for around 6,000 Chilean exiles fleeing from the Pinochet regime, Australia may have also provided a safe haven for the regime’s secret service agents. One of these agents is Adriana Rivas dubbed ‘the Bondi Nanny’.

Rivas was the personal secretary of General Manuel Contreras, head of Chilean secret police DINA during the dictatorship. The DINA operated from the Simon Bolivar headquarters in Santiago and was mandated to subdue opposition to the regime. Leftwing activists, students and trade union leaders were kidnapped from the streets and taken to the headquarters where Contreras’ agents would subject them to horrifying torture, including using dogs to rape victims during interrogations, and the employment of sarin gas injections. Rivas, previously employed as a nanny in Sydney’s suburbs, is currently being held in prison awaiting extradition to Chile to face charges for crimes against humanity.

It is not known if any other former secret police agents are living in Australia at present.

It was Liberal Party Foreign Minister William McMahon who originally approved the decision for ASIS to open its Santiago station in December 1970. However Prime Minister Gough Whitlam, upon considering the negative impact on public opinion if Australia were to be found colluding with such a brutal regime, decided to close the office in 1973. But the damage had already been done. According to heavily redacted memos released along with the files it seems that Whitlam was more worried about damaging relations with the US, instead of Australia’s human rights record.

Until the full files are made accessible, the true extent of Australian interference in the sovereign Latin American country remains unclear.

‘One of the most concerning comments we have heard coming from Chile, after these revelations came to light, is that Australian spies may have been involved in distributing CIA funds to truck owners intent on paralyzing Chile,’ said Navarro.

‘CIA-funded truck-driver strikes brought much misery to Chile; I remember the scarcity of food in the cities, the long queues we had to bare to get something to eat. If Australian spies were involved in such actions, that is entirely illegal and should be condemned. All could be clarified if Australia released its 50-year-old records. What does Australia have to fear now? The US have declassified them, we need transparency from our Australian government.’

Despite the Australian government trying to bar access to the further declassification of the files, Fernandes, along with Chilean exile campaigners, is adamant that transparency is needed. Australian authorities argue that revealing the contents of the files may damage the country’s reputation and thus must remain closed for ‘state security reasons’, but Fernandes disagrees. The case has been taken to the Administrative Appeals Tribunal, in the hope of overturning the decision to keep the files out of the public realm.

He told Australian media outlet SBS: ‘We will show that the harm to Australia’s national security today is non-existent. We will show that we are not asking to find out the names of any of the ASIS or ASIO officers who were involved. What we want to know is the motivation, the instructions, the orders, the policy planning.’

So far there have been no official statements from ASIS, Senator Marise Payne or the Chilean foreign minister, yet despite legal obstacles, Chilean campaigners are determined to push ahead in their quest for truth and justice.

Senator Marise Payne was contacted for a statement but there has been no response.