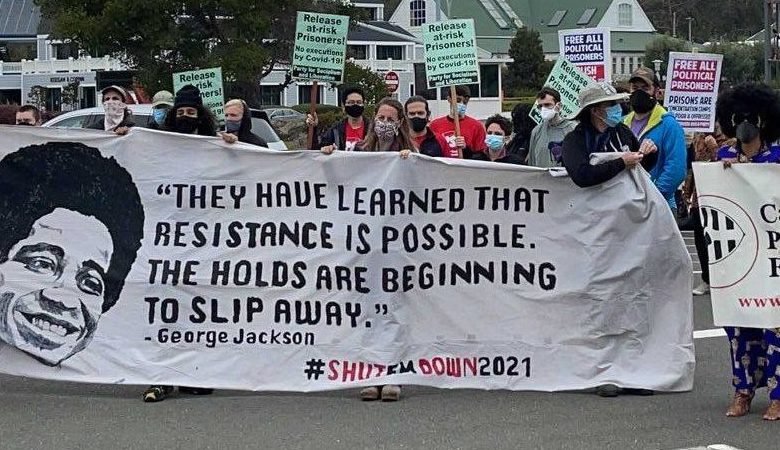 On the morning of August 21, the 40th anniversary of George Jackson’s assassination by San Quentin prison guards, the Party for Socialism and Liberation joined local activists and prison abolitionists at San Quentin State Prison as part of the “Hunger Striking for True Freedom Tour.”

Sixty participants on foot, bike, and in cars marched from the Larkspur Ferry Parking lot along Sir Francis Drake Blvd and gathered to hold a rally at the gates of San Quentin prison. Speakers at the rally included family members of prisoners, artists, formerly incarcerated activists, California Prison Focus, EMPACT, SF Bayview Newspaper, POOR Magazine and several prisoners on the inside calling by phone, including Yusuf Bey IV.

The protest was held in solidarity with prisoners in conjunction with the national “Shut ‘Em Down” call to action by Jailhouse Lawyers Speak. JLS is demanding an end to the despicable and inhumane conditions facing the millions of poor and oppressed people inside U.S. prisons and jails.

The organizing efforts for the August 21 San Quentin rally encountered an obstacle when one of the lead organizers of the event, Minister King X, was arrested on August 9. King was calling for the humane release of 82-year old political prisoner Ruchell Magee at a small gathering on July 15. The police arrested King citing an obscure legal infraction of the Penal Code section 4571, which prohibits anyone with a previous felony conviction to stand on prison or prison-adjacent grounds without approval from their warden.

On short notice, community organizers prepared a rally in support of King for the morning of August 20 at the Solano County Superior Court. The Solano County district attorney dropped all charges against King on August 19.

Despite the state’s attempts to set back the struggle, organizers came together to commemorate Black August and continue the fight for liberation on August 21. Speakers advocated for Ruchell Magee, the longest-held political prisoner in the world, as well as others such as Mumia Abu-Jamal, Sundiata Acoli, Leonard Peltier and more.

Speakers also celebrated George Jackson’s life and enduring legacy, linking various Black liberation struggles that have taken place in the month of August. Speakers also emphasized that the title, “Hunger Striking for Freedom,” commemorates the 2011-2013 Pelican Bay Hunger Strikes to end indefinite solitary confinement. The struggle continues for the liberation of the hunger strikers who are still in prison today.

Speaker Joey Villarreal, aka “JV,” host of Radio Free Aztlan, noted that San Quentin is the only California prison for inmates on death row. “The state has no authority to murder people. They have an illegitimate authority.”

Allegra Taylor, daughter of political prisoner Hugo Pinell, advocated for Ruchell Magee at the gates of San Quentin prison. Taylor’s father, a member of the San Quentin 6, was killed while participating in a rebellion at New Folsom Prison on August 12, 2015. Hugo Pinell was one of the San Quentin 6 who took over the Marin County Courthouse in 1970. While he was in prison, Pinell was repeatedly targeted for assassination by white supremacist groups such as the Aryan Brotherhood. Taylor shared that despite the fact that Hugo Pinell was tragically murdered in prison over 6 years ago, her family is still waiting for pretrial discovery.

Taylor finished her speech by saying, “A system designed to do what it does will do what it do. It’s up to us to determine whether or not to keep sitting back and allowing it to be what it is.”

Multiple speakers encouraged attendees to support the California Abolition Act to Abolish Involuntary Servitude (ACA 3). Like the U.S. Bill of Rights, the California Constitution allows the practice of forced labor as a means of punishment for crime.

Conceived by Samual Nathaniel Brown, who is incarcerated at California State Prison in Los Angeles County, ACA 3 would amend the state constitution to end forced labor. Prisoners in California are forced to work for far below the minimum wage, at rates from $0.08 per hour to $3.90 per day.

Join or organize an action in your community to support incarcerated workers and strikers!