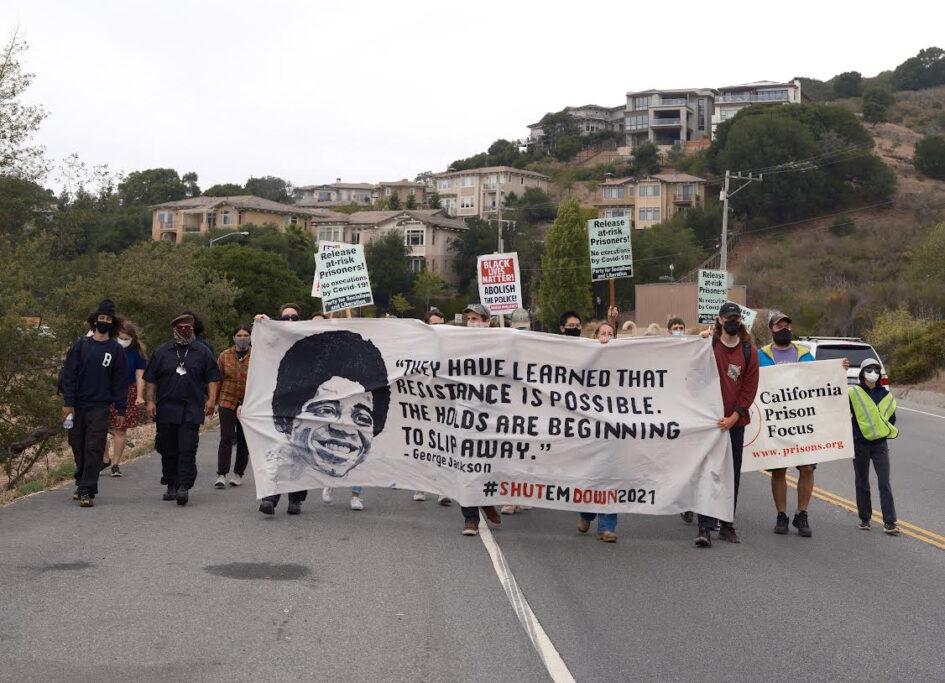 August 21 — Overcoming both dangerous air quality from California’s cataclysmic fires and the state’s desperate attempts at intimidation, veterans and activists of the prisoners’ rights movement marched to the West Gate of San Quentin Prison today to commemorate Black August and the spirit of George Jackson. Fifty years ago on this date, George Jackson, a Black Panther Party Field Marshal, was assassinated by San Quentin guards behind the prison walls, an action that led to the historic Attica Rebellion in New York State. Organizing and actions by Black and Indigenous people imprisoned in San Quentin have been integral to the prisoner rights’ movement.

In an act of state intimidation prior to the memorial event, one of its key organizers, Minister King X, was kidnapped off the streets of Oakland by California Department of Corrections police. Minister King X, a formerly incarcerated Black artivist, educator and activist, was charged with violating a little-known California statute prohibiting formerly incarcerated people from being on prison property without state permission. The charges were dropped two days before the protest, but the state’s repressive tactics placed a chill on the event’s organizing. (San Francisco Bay View, Aug. 19)

The Black August commemoration was a mixture of speeches, music, spoken word, poetry and phone calls from people on the inside. Initiated by California Prison Focus and KAGE Universal, the event was endorsed by a broad range of organizations including the Taz Foundation, EMPACT, Blunt Funk, Dope Era, So Black So Beautiful, Poor Magazine, the San Francisco Bay View National Black Newspaper, Black Riders/New Afrikans, Jailhouse Lawyers Speak, Cell Block to City Block and the Prisoners Solidarity Committee of Workers World Party.

At the rally, speeches and music were projected from a mock prison cell mounted on the bed of a pickup truck, alternating with taped messages from KAGE Universal. Oakland Abolition and Solidarity proudly held their banner with a picture of George Jackson and his quote: “They have learned that resistance is possible. The holds are beginning to slip away.”

Several incarcerated people called out from inside the walls to the rally with greetings of “Free them all!” Speakers reflected on how the inhumane and racist conditions inside the prisons sparked a large and militant movement both inside and outside the walls in the late 1960s and ’70s. Kim Pollak of California Prison Focus read letters from people still inside, who were veterans of early prisoners’ rights struggle.

Leia Schenk of EMPACT spoke of Ruchell Magee, the longest-held political prisoner in the U.S. Magee is the sole prisoner survivor of the takeover of the Marin County Courthouse by Jonathan Jackson and others on Aug. 7, 1970. That bold action by the younger brother of George Jackson was met by a hail of bullets by San Quentin guards, killing all the incarcerated activists who were resisting, except Magee, who has now spent over 58 years in California prisons.

Family members of prisoners spoke about a recent COVID outbreak on death row and other areas of San Quentin. Parts of the prison were on lockdown due to the spread of the Delta variant. Speakers called for mass releases of elderly and immunocompromised incarcerated people. In 2020, due to an unsafe transfer of hundreds of incarcerated people into San Quentin, over 70% of the population contracted COVID-19, and 29 prisoners died.

Allegra Taylor, daughter of Hugo Pinell, was one of the strongest voices for the elders and veterans of Black August. Pinell was a comrade of George Jackson and part of the San Quentin Six, a group of prisoners charged with participating in an August 21, 1971, uprising. Pinell spent 46 years locked in solitary confinement. On August 12, 2015, he was released intentionally into a hostile exercise yard, where he was assassinated by a group of white racist prisoners.

The Black August commemoration was a display of the power of inside-and-outside unity for justice. Taylor answered the attempt to intimidate outside supporters of the people inside. She said, “They are fighting for human rights for prisoners. It is a crime to make people feel like they should be ashamed to speak up for their loved ones. I will speak up for Ruchell Magee just like I would have spoken up for my daddy. I am going to speak up for him until you set him free, CDC!”