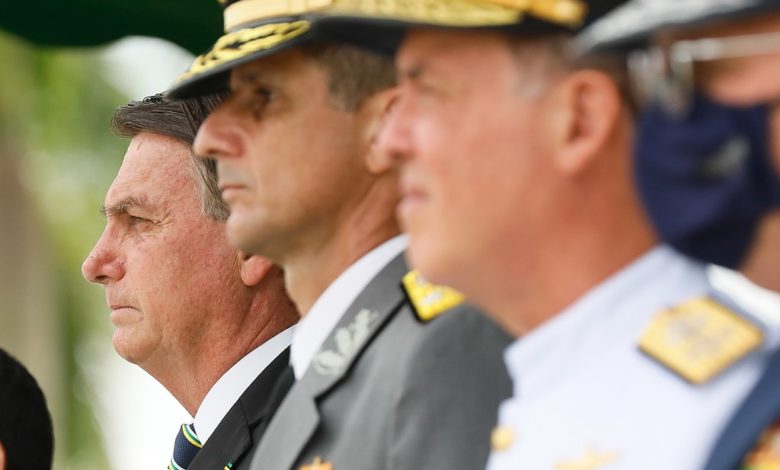 Dueling demonstrations were held in major Brazilian cities Tuesday as the country marked its independence day amid a fierce struggle over its future. In the face of multiple scandals and falling poll ratings, far right president Jair Bolsonaro called his supporters into the streets in an attempted show of force to intimidate political rivals and the judiciary. A close ideological ally of Donald Trump, it was suspected that Bolsonaro would attempt his own January 6th-style insurrection. He has been issuing increasingly blatant threats to carry out a coup in recent months, and is an outspoken supporter of the fascist military regime that ruled Brazil from 1964 to 1985.

But the massive crowds Bolsonaro had hoped for failed to materialize, another sign of how deeply unpopular his rule has become. Far right rioters initiated clashes outside the Supreme Court only to be forced back by riot police armed with pepper spray. Nevertheless, the political views on display at the pro-Bolsonaro rallies were deeply troubling and frequently involved open calls for a military coup.

The Brazilian left responded by calling protests of their own to challenge this grave threat to basic democratic rights. In scores of locations across the country, unions, social movements, left wing political parties and others mobilized their supporters into the streets in a massive show of resistance to the menace of fascism. Anti-Bolsonaro demonstrations have been gathering strength, and these actions are set to continue.

Preparing the ground for a coup

In August, the Supreme Court of Brazil opened a fraud case against Bolsonaro for spreading fake information, especially regarding the integrity of Brazil’s electronic voting system. For months, Bolsonaro and his supporters have spread the baseless lie that the vote counting system had been tampered with and that any vote using the electronic systems would be illegitimate.

This is clearly an attempt to set the stage to overturn the 2022 presidential election if Bolsonaro is not the winner. Former President Luiz Inácio Lula da Silva is dominating in opinion polls and is widely expected to win if the elections are fair. Lula represents the left wing Workers Party. In office from 2002-2010, his administration was highly popular and implemented major social programs for the country’s poor as well as a foreign policy independent of the United States.

This anti-democratic scheming is creating an unstable political situation in the country. Bolsonaro has cultivated close ties with the military while in office, filling his cabinet with former officers — including Vice President and retired General Hamilton Mourão. With the situation beginning to spiral out of control, Bolsonaro’s rhetoric is becoming more extreme.

The recent protests come amid multiple crises of Bolsonaro’s own creation. Bolsonaro is notorious for his outright denial of the COVID pandemic. Brazil has the second highest death toll of any country, after the United States. Economic troubles are also hitting Brazil hard. Currently 14 million Brazilians are unemployed. Inflation of the Brazilian currency has reached 9% over the past 12 months. Fires across the Amazon rainforest almost reached record highs in August of 2021. The limited protections that were in place for this rich source of biodiversity, known as the lungs of the world, were eviscerated by Bolsonaro when he took office.

Bolsonaro cast a thinly veiled threat at the Tuesday protest saying, “only God can remove me from power.” This follows a statement earlier this week when he remarked that, “I have three alternatives for my future: being arrested, killed, or victory.” Whether Bolsonaro will actually be able to carry out a coup remains to be seen, but the people of Brazil have consistently demonstrated their determination to resist these attempts in huge numbers.