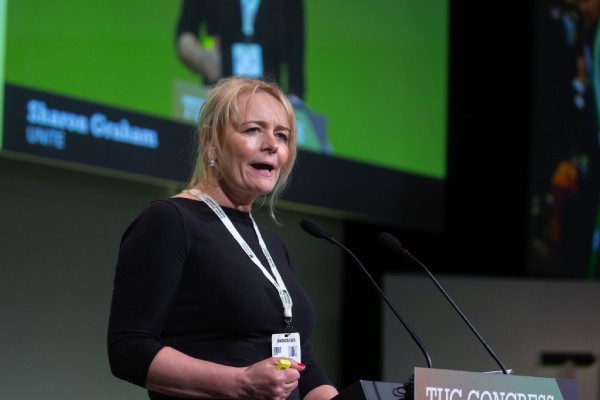 Sharon Graham has been elected as general secretary of the Unite union in a victory for the left.

Socialist Worker has supported a vote for Graham since the election cycle began in April and we are pleased she has won.

After the result was announced, Graham said, “Our members expect their union to be in their corner so I was proud to stand on a manifesto that pledged to put our members and our workplaces first. I will deliver on those promises.

“As general secretary, I will put all the power of our union into defending their jobs, improving their pay and protecting their rights.”

It is a bitter defeat for the Labour right wing’s candidate Gerard Coyne. If Coyne had won it would have meant even less struggle and been a big help for Keir Starmer’s drive to move Labour rightwards.

That has been rejected. During the election, Coyne turned to red baiting, denouncing Graham as the candidate “backed by the Socialist Workers Party and Militant”.

Helen McFarlane is a Unite national executive council member for Scotland. Helen told Socialist Worker she is “delighted” at the result.

“Graham is passionate, intelligent and really focused on workplaces and workers. She understands that the workplace is where politics is. And she’s a woman which is just fantastic.”

Graham’s campaign clearly attracted support with its central message—“Our power is rooted in the workplace—that’s how we win.”

This was a call to move away from Unite’s failure to organise effectively to defend workers, and its reluctance to support rank and file initiative from below.

It’s also a break from believing that activity within the Labour Party will deliver changes for workers.

Jed Ellis works at the Rolls-Royce aerospace plant in Bristol. He told Socialist Worker, “The result represents a breath of fresh air for trade unionists and working people across the country. Unite members wanted a shift in the style of leadership.

“I like Graham’s strategy of power back to the workplace. Graham wants to train more reps and build the union from the bottom up rather than top down.”

Jed added, “Although Graham wasn’t from the rank and file, she will provide a united body to support rank and file movements.”

Throughout the election, many on the left said that if there were two left candidates then right wing Coyne would win. They were wrong—and underestimated the support Graham had.

Many on the left also said that Turner was the lead candidate on the left as he won more nominations and everyone should rally round him. They too were wrong.

Calls for Graham to step down to avoid “splitting” the vote were rightly rejected by her campaign and supporters.

The results show that Graham was right to not capitulate to the continuity candidate. Turner represented more of Unite’s present course, which has  been rejected.

Jed said, “It frustrates me that people wanted Graham to step down. We knew what we were getting with Turner, and we wanted change.

“His comments for ‘unity’ have been turned on their head.”

Now the issue will be how much changes under Graham as general secretary. Her promises to return to the workplace and support the rank and file need to be turned into action.

Helen said, “We’ve got our policy conference next week where the position of the union will be determined—not by the general secretary but by members. We have in Graham a general secretary we are confident will deliver policies as members decide.

“In a union it’s not so much about who the general secretary is, but what control and involvement lay members have.

“This is a new opportunity for people committed to the left to win socialist policies, getting together with new energy.”

There has to be change. There needs, for example, to be a real fight against fire and rehire. Up until now, most notably at the JDE coffee plant in Oxfordshire, Unite has dressed up defeats as victories.

Worse conditions implemented with union participation are not an acceptable alternative to fire and rehire, or to worker’s action.

Additionally, Graham has underplayed the importance of politics, such as climate change or anti-racism, in the unions.

Workers are stronger when there is a fight against racism, sexism and other issues that divide them. Unite has to step up such fights.

And Unite has to openly oppose Starmer’s agenda in Labour—and be ready for debates in favour of left political organisations outside Labour.

Who is at the top of the union makes a difference.

But the general secretary is not the most important person. The rank and file Unite members, the strength of their organisation and whether they fight are what matters most.

Independent organisation of workers at the base of the union is the key both to winning against the bosses and putting pressure on the union leadership.