Boris is in trouble. But what can ‘partygate’ tell workers about the nature of capitalist Britain? 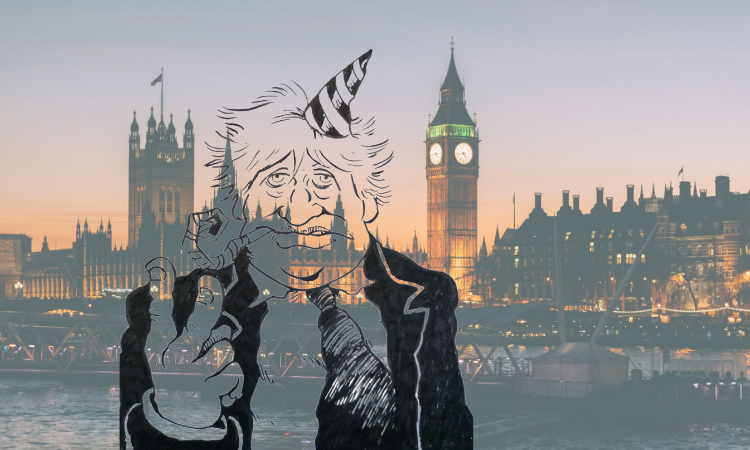 At the time of writing, prime minister Boris Johnson is attempting to sidestep demands for his resignation by offering up the most threadbare excuses and scanty apologies for his attendance at parties and social gatherings in 10 Downing Street during the first 2020 Covid lockdown.

He has signally failed to acknowledge and apologise for having first responded to the revelations with barefaced lies. Such is the contempt our rulers in general, and Mr Johnson in particular, have for the people they claim to ‘represent’.

At present, Johnson is hiding behind a conveniently ‘ongoing investigation’ as a way of avoiding the questions of his most persistent and outspoken critics. This ‘investigation’ process has been rendered particularly farcical by the fact that the person launching the investigation is the person being investigated (Johnson himself) – and that clear transgressions by himself and his staff have been widely documented and publicised.

The particularly blatant nature of Boris’s latest crimes have roused the Westminster political and journalistic fraternity to a righteous pitch of furious indignation. Double standards and corruption are one thing when they are kept politely behind closed doors, but Johnsons’ chaotic and brazen behaviour threatens to expose the entire rotten and bloated corpse from which all these jackals feed.

As the Spectator put it: “One MP close to Johnson admits that ‘the only people supporting Boris are those who think their seats depend on him’. After recent opinion polls, the number of those MPs is declining.” (Is it over? by James Forsyth, 15 January 2022)

Moreover, every fresh revelation underlines for workers home truths about the nature of the capitalist state and bourgeois politics that our rulers would much prefer should remain obscured.

Lessons on the nature of the state

Besides the bankruptcy and hypocrisy of Johnson and his government in particular, this incident sheds light on the nature of the British state in general.

For instance, if parties were being held at 10 Downing Street in direct contravention of the law, it would have needed the collaboration of the Metropolitan police to allow the guests and booze through the gate. Police officers must also have been watching the convivialities in real time via the Downing Street security cameras.

Yet they said nothing, although at the same time ordinary workers were being arrested for playing cricket outdoors or for meeting in groups larger than two. Thousands were prosecuted in the courts for such breaches. A year later, Covid laws were used this by the same force to brutally repress women who gathered to mourn the rape and murder of Sarah Everard by a Met police officer. (See our article on the PCSC Bill)

Both incidents – along with several cases of the police facilitating illegal evictions up and down the country when countless households were struggling to pay their rent as a result of the lockdowns and the 2020 economic crash – remind us that the law is not applied equally in capitalist Britain.

It is also worth noting that the Met initially refused calls to investigate the claim that parties had taken place in Downing Street during lockdown on the grounds that there was a “lack of evidence” – apparently ‘forgetting’ that the whole point of a police investigation is to gather evidence and then come to a conclusion. And this is ignoring the point that a whole lot of very convincing evidence had already made its way into the public domain!

It is hard not to come to the conclusion that the police were simply covering the government’s backside – and their own – making a mockery of our rulers’ claim to be upholding (and answerable to) the ‘rule of law’.

Clearly, the British police do not serve the general public: they serve the capitalist ruling class. The truth of this is felt by workers in a myriad ways, big and small, every day, but the latest scandals are highlighting it in a quite inescapable way.

Meanwhile, both the parties themselves and the police’s unwillingness to investigate them are clear evidence of our rulers’ disdain for their own rules. Clearly they feel themselves to be above the law – and have good reason for thinking so.

Commenting on the remarkable level of impunity enjoyed by politicians, Robert Peston (not known for being a critic of the present system) wrote in the Spectator: “Under the British system, the ultimate judge and jury of whether any minister should be punished is the prime minister. And that means only the PM can decide his own fate.” (How will Boris punish himself if his No 10 party did break the rules?, 11 January 2022)

What is not in doubt is that there really is a deep and growing anger amongst workers at the hypocrisy and corruption of our leaders.

Anger at the unequal burden placed on the poorest through the many privations of Covid and the lockdowns while those at the top have been ignoring the rules and lining their pockets; anger at the unemployment, evictions and the rising cost of living that are about to tip many thousands more into absolute poverty and destitution while the stock exchange gamblers celebrate their latest ‘windfalls’; anger at the vaccine mandates and passports that threaten to create a social and employment apartheid and to further marginalise Britain’s poor while scapegoating them as ‘non-compliant’; anger at the further privatisation of the health service and the destruction of civil liberties … the list is long and keeps on growing.

The shock and horror currently being displayed by the commentariat, on the other hand, are entirely disingenuous. These lackeys couldn’t care less about Boris’s crimes or about corruption; they care only about the smooth running of the capitalist-imperialist system of exploitation and Boris’s fitness to act as frontman-in-chief for that system.

There are, after all, far bigger crimes that have been committed by this government that have not received a fraction of this coverage and certainly nothing like the outrage.

Where is the campaign to ‘save journalism’ and have Julian Assange released from his decade of solitary confinement, described by the United Nations special rapporteur as torture even before he was banged up in a Belmarsh solitary cell?

Where is the campaign to expose the machinations of the pharmaceutical industry, which has at every turn lobbied for a policy that will increase sales of vaccines, increase its power over poor countries, and bring dividends to its shareholders rather than ending the pandemic and reducing the loss of life? How many lives in Britain and worldwide would have been saved by a serious zero-Covid policy such as was followed by China in January 2020? How much quicker would the pandemic have been ended?

How many of our elderly died well before their time in care homes during the pandemic, consigned there without testing, protection or treatment by government decree, despite the warnings of caregivers?

How many Afghans, Iraqis, Libyans, Syrians, Ukrainians, Palestinians and Yemenis have died or been injured in the aggressive, criminal wars supported and prosecuted by this current government? How many have been made homeless or stateless?

How many Venezuelans, Cubans, Nicaraguans, Iranians, Syrians and Koreans have died as a result of the crushing sanctions inflicted on their peoples as collective retribution for daring to dream of independence and freedom?

How much public money has been raided from the treasury by our rulers via Covid contracts, privatisations, bank and business bailouts, armaments contracts, ‘green’ initiatives, etc? Money that is ultimately taken from the working class, who are denied access to decent schools, hospitals, homes and all the other amenities and services that make life meaningful?

Hardly a word is spoken about any of these real and significant crimes of Boris Johnson and co. We know more about the source of his wallpaper than we do about the murderous and freedom-crushing deeds of his government, either at home or abroad.

As far as the commentariat now up in arms are concerned, all this is as nothing. What concerns them is that too many incidents in quick succession are making Boris an electoral liability and showing up the system he is being paid to represent.

Despite the lack of charismatic alternatives, a significant section of the ruling class would now seem to have decided that his continued occupation of the prime ministerial office is a liability they can no longer afford. Why else would information 18 months old start to surface just at this moment?

This is the way our ‘fourth estate’ works: newspaper owners and editors gather information and sit on it until it serves their agenda – either for private blackmail purposes or for public humiliation of the individual concerned.

Yet there are still plenty who believe Boris will ride out this present storm and continue to deliver for his bosses in the monopoly boardrooms.

Why? Because In the absence of meaningful, organised working-class pressure, Boris and his employers have got used to thinking they can get away with anything – and they are right. This battle is being fought out primarily amongst the ruling class, each section of which is doing what they can to harness public opinion on its side. As an independent force, the working class is presently silent.

This is our real challenge: not to remove Boris Johnson and replace him with some other equally loyal servant of monopoly capital, but to organise our own forces so as to be able to act in our own interests.

Workers need organisation and leadership that can give them a voice that can’t be ignored by our rulers, and then they need to use that organisation to depose those decadent and parasitic oligarchs and replace their monstrous machinery of repression and exploitation with a system that can actually deliver a life worth living to the mass of the workers.

What can Boris’s ‘partygate’ tell us about the nature of capitalist Britain?

Trouble in the EU: is Polexit looming?

Unless They Tell Me I Have to