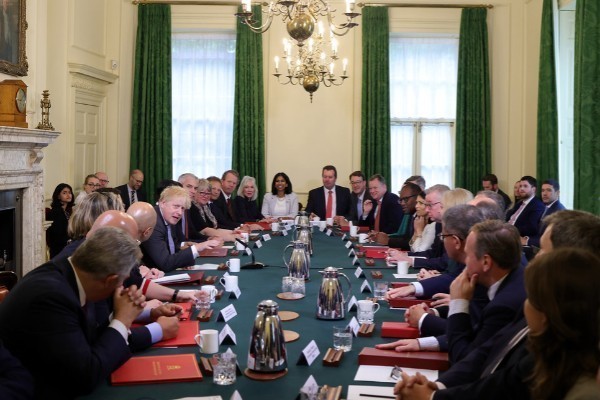 A nee parcel of rogues round the cabinet table (Pic: Number 10 on Flickr)

The big Tory reshuffle of government positions last week matters—but not for the reasons that excite political journalists.

The ups and downs of right wingers’ political careers are froth. More important is that the reshuffle tells us something about where the Tories are going.

Boris Johnson, a man obsessed with holding office for himself, despatched a number of obvious incompetents. These included the permanently failing education secretary Gavin Williamson and the “holidaying while Afghanistan burns” foreign secretary Dominic Rabb.

Having removed them, they become useful scapegoats for past failure. Covid-19 deaths? That was the fault of that awful Matt Hancock who had to go.

Problems with schools? “Blame Williamson—I removed him,” Johnson can say. Death and humiliation abroad? That’s the fault of Raab who was axed.

Of course, they are not all hurled into the darkness. Raab, having failed as foreign secretary, becomes justice secretary with deputy prime minister as a consolation. That means he’s prime minister when Johnson is on holiday—unless he’s on a beach.

And Williamson is being tipped for a knighthood.

There are some analysts who say that the reshuffle is a sign that Johnson is preparing for an early election. This could help him, for example, to have the vote before the revelations and conclusions of an inquiry into the handling of Covid-19.

And it’s true that Oliver Dowden, the new Tory party co-chair, immediately told staff to intensify preparations for an election.

Showing that David Cameron has gone but some animals are still in the spotlight, Dowden said, “You can’t fatten a pig on market day.”

But even “early election” here means 2023. And Tory officials insist Johnson is still eyeing an election in the summer of 2024.

Other analysts have tried—and failed—to find some ideological vision of Toryism that Johnson is promoting through this reshuffle.

The real guiding principles are simpler, more opportunistic, and nastier. One is that people who don’t question Johnson are promoted. Simon Clarke, the new chief secretary to the Treasury, is one Johnson fan going up. Anne-Marie Trevelyan, the new trade secretary, is another.

Another key determinant is a willingness to carry on with racism, imperial bluster and scapegoating.

Crucially, Priti Patel remains at the home office to impose more attacks on migrants, ram through the measures in the police bill and call for longer prison sentences.

Liz Truss, the new foreign secretary, is a noted “China hawk” who will always be good for a jingoist sabre-rattling tirade against perceived threats from abroad.

One of her first acts as foreign secretary was to tell the European Union to stop moaning about the new submarine deal between the US, Britain and Australia. She told them that “freedoms need to be defended” and spoke of “malign acts”, in a thinly veiled reference to Chinese policy.

The Financial Times newspaper editorial board advises Johnson that after the reshuffle he should concentrate on key economic questions. And to not be “sidetracked into divisive and unnecessary culture wars”.

But for Johnson such matters are not a distraction, they are central to a plan for grabbing votes.

New culture secretary Nadine Dorries is a long-time Johnson supporter, a ranter against “woke” ideas and an opponent of supposed left wing bias at the BBC.

Therese Coffey remains as work and pensions secretary to carry on her contemptuous pronouncements against benefit claimants.

None of this should obscure the real problems that Johnson faces. One key task for the Tories is supposed to be ”levelling up”—but nobody really knows what this means. This is now the responsibility of Michael Gove—who Johnson doesn’t trust—and might be another convenient sacking in a year’s time.

And Johnson’s fakery about standing up for ordinary people is more threadbare by the minute. He is raising national insurance, taking away the Universal Credit uplift and setting aside the pensions triple lock.

The real issue is at what point is there enough opposition outside parliament to carry out the key “reshuffle”—sacking Johnson himself.