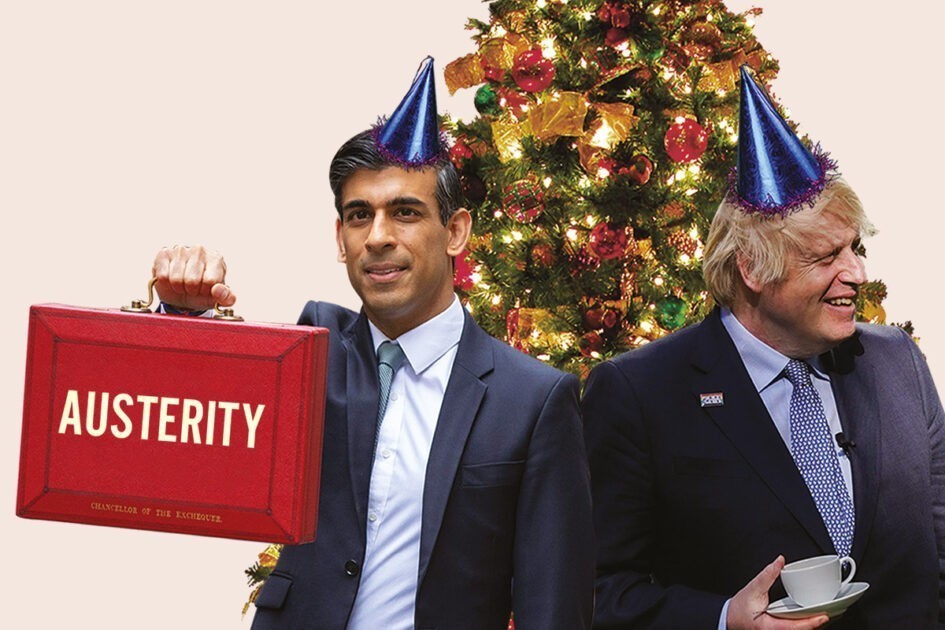 A video of Tory Party staffers laughing about breaking lockdown rules has confirmed what most ordinary people already know by now: that this elitist, arrogant, out-of-touch government believes that there is one rule for them, and another for the rest of us.

Allegations have been flying around for several weeks that the Tories held a Christmas party (or even multiple parties) at Downing Street last year, whilst London was under tight pandemic-related restrictions, which banned social events and household gatherings.

When questioned on this topic, however, Boris Johnson and his ministers have repeatedly denied that any such parties took place, stating categorically that “no COVID rules were broken”.

But last night, ITV News published an internal video from a mock Downing Street press conference, in which Conservative staff joked about how they might cover up for rule breaking by senior Tories and government officials.

No 10 has spent the past week denying any rules were broken. This new evidence calls that into question. pic.twitter.com/nKYK0tG0dQ

“What’s the answer?” one of the press team asked. “It wasn’t a party, it was cheese and wine,” another suggested.

Disgraced and shamed, Stratton has subsequently resigned from her current post as a government advisor. And it is likely that more heads will roll as the Tories look for a scapegoat to take the heat for their misdemeanors. 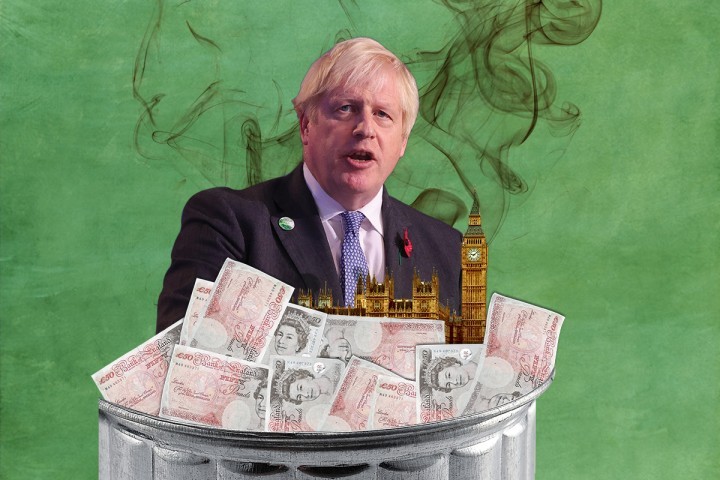 Unsurprisingly, this explosive footage has provoked an almighty backlash both from the public and from Tory backbenchers.

Today’s news coverage has been full of devastating stories that highlight the stinking hypocrisy emanating from the Tories.

Whilst Conservative ministers and party staff were illegally enjoying canapés and bubbles at Downing Street, the rest of the country was dutifully obeying lockdown rules at home; families were forced to spend Christmas apart; and many were having to say goodbye to dying loved-ones over the phone.

“This looks absolutely horrific,” asserted one Tory MP. Others have similarly voiced their anger towards the Prime Minister – enraged that Number 10 have repeatedly made them cover up for the government and their scandalous crimes.

Even Dominic Cummings, who knows a thing or two about flouting COVID restrictions, has taken the opportunity to stick the knife into his former employer over #PartyGate.

As the anger builds and the situation unravels, it is possible that even the Prime Minister himself could be forced to step down.

One snap poll by Opinium, for example, revealed that 53% of those surveyed believed that Boris should resign, with only 28% believing he should remain in place.

At the same time, figures from across the board – including Scottish Conservative leader Douglas Ross and multiple opposition MPs (although, notably, not Captain Hindsight, ‘Sir’ Keir Starmer) – have called for Johnson to go.

For the first time, a majority of the public think the Prime Minister should resign.

35% of those who voted Tory at the last election now think the PM should go. pic.twitter.com/WpKhRBWO6L

No justice under capitalism

Under pressure from all sides, Boris Johnson was forced to apologise in PMQs earlier today. But even then, the Tory leader continued to deny any knowledge about the Christmas party that is alleged to have been held at his official residence.

Asked by the opposition if evidence would be handed over to the Met Police to enable them to investigate the matter, Johnson replied: “Of course we will do that.”

But nobody really believes that any genuine inquiry will take place; or even if it does, that this will produce anything more than a slap on the wrist.

For starters, there is no trust that the police – an institution that is itself shrouded in corruption and scandal – will seriously go after the very tops of the British establishment. The Met, for example, were all too happy to turn a blind eye recently to Prince Andrew’s suspected deviant activities.

Indeed, at the time of writing, over 150,000 people have signed a petition calling for the Met Police themselves to be investigated for failing to look into last year’s Downing Street Christmas party.

And other leaked videos show pompous Tory MPs such as Jacob Rees-Mogg even joking that the police will not investigate the party’s illegal gatherings – including the one he is being filmed speaking at!

Do your f*cking job @metpoliceuk

Similarly, people are right to be skeptical when it comes to such attempts to hold this shameful government to account.

Johnson and the Tories are guilty of social murder – responsible for tens of thousands of unncessary deaths as a result of their incompetence, recklessness, and hubris. Yet nobody at the top has been punished for this.

The bosses that they represent, meanwhile, have never faced arrest for breaking lockdown rules; nor for sending employees into overcrowded workplaces, such as construction sites, without the necessary health and safety measures.

#BorisJohnsonOut
“I work in construction and I have to respect guideline rules, while this lot in Downing Street are having a whale of a time” pic.twitter.com/hjx3n08ika

All the while, government ministers have utilised COVID chaos as an opportunity to line the pockets of their cronies and chums.

At the same time, they have had the cheek throughout the pandemic to blame ordinary people for spreading the virus – whether it be sunbathers, young people, or even ethnic minority communities. Many have been fined extortionate amounts for holding house parties. But no doubt the Tories will not pay a penny for their illicit festive jamborees.

All of this goes to show that there can – and will – be no justice under capitalism. Instead, workers and youth must mobilise to kick out this whole criminal government, and the rotten system they defend. 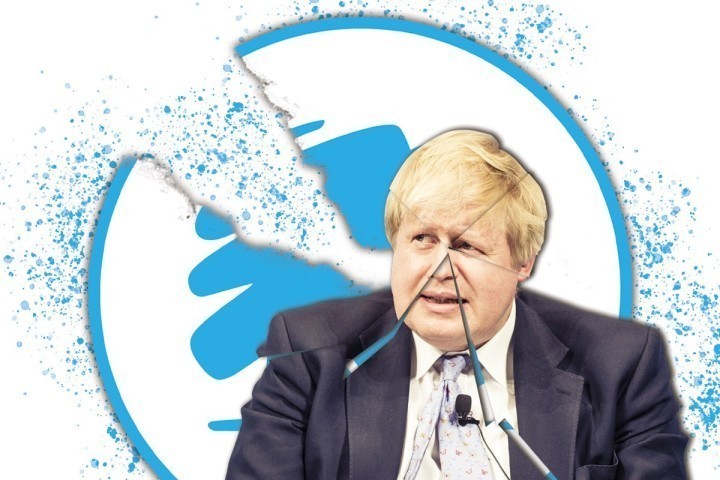 These latest events come on top of a torrent of other Tory scandals and sleaze in recent weeks and months: from Matt Hancock’s hanky-panky, which similarly broke COVID restrictions; to the Paterson affair, where Johnson again had to make a humiliating apology, after forcing Conservative MPs to support their disgraced colleague; to countless other examples of corruption that have tainted the PM and his Cabinet.

But these are not just a series of accidents and misfortunes. Rather, they are a reflection of the inherent turbulence and instability in the system – that is, of the deepening crisis of capitalism, which is throwing Johnson’s ill-fated government from pillar to post.

These crises, in turn, are exacerbating all the tensions and contradictions within the Tory Party, leading to splits, divisions, and even rebellions. And this process will only intensify as British capitalism descends and declines ever further.

At the same time, it is clear that the serious strategists of capital are growing increasingly exasperated with the Prime Minister, who is more interested in protecting his own personal interests than those of big business.

From rambling speeches about animated pigs; to jingoistic confrontations with European leaders; to the threat of trade wars; to a string of broken promises: it is evident to the ruling class that Johnson is an unreliable maverick, who cannot be trusted to represent their needs and priorities. 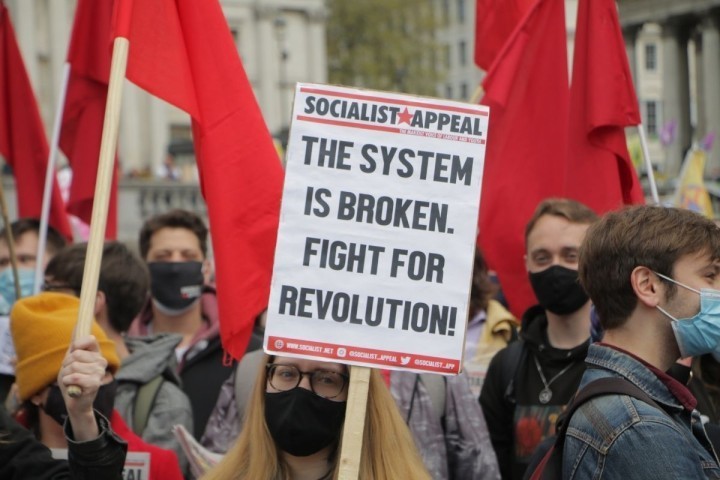 This latest leaked video, therefore, is no doubt an attempt to clip the Tory leader’s wings – possibly paving the way for the PM’s resignation and replacement by a more pliant character, such as City of London golden-boy Rishi Sunak; or even, down the line, a Starmer-led Labour government or national government.

But such moves could easily backfire. In landing a blow against Boris in this way, Johnson’s opponents within the establishment are undermining the authority of the entire government – and, indeed, of bourgeois democracy as a whole.

Already, the general mood amongst workers and youth is one of disdain and disgust towards the careerists and cretins in Westminster; and towards the capitalist elites more widely. And this hatred could easily light the spark for social explosions in the future.

Instead of mere indignation, however, what is needed is to channel this anger into organised class struggle; into waves of revolt that can take advantage of the splits and divisions within Johnson’s government to land a knockout blow.

Workers are beginning to move into action, fighting back against attacks on pay, jobs, and conditions. And young people are taking to the streets over racism, police repression, and climate change.

Now is the time to build the forces of Marxism, in order to direct and lead these struggles of workers and youth into a revolutionary movement capable of overthrowing the degenerate political establishment and their bankrupt system. We urge you to join us in this vital task.

Letter from a doctor: A party to loathe

Yesterday brought news that, while the nation respected a full lockdown for the Christmas period last year, the Tories hosted an office party at 10 Downing Street. As I write this, it is hard to feel anything but anger and betrayal.

For myself and many of my colleagues on the ward, Christmas was meant to be a welcome relief from a devastating year. We had witnessed the deaths of patients, colleagues, family, and friends.

When the decision was made to lockdown for Christmas, we understood the gravity of the situation. We had experienced it first-hand.

While hundreds continued to die on understaffed, under-resourced wards, the Tories enjoyed wine and cheese. While exhausted workers sacrificed their mental and physical health for the safety of the nation, the £125,000-per-year Tory spokeswoman Allegra Stratton giggled with journalists about a party. And how can we forget about Cummings and the Barnard Castle fiasco?

It’s one wine-and-cheese rule for them, and another death-and-disease rule for us.

The capitalist system that protects the Tories and the ruling class from the full-scale chaos and suffering of the COVID pandemic, that lets MPs enjoy pay rises while our nurses struggle to pay their bills, is rotten to the core.

It is long overdue a revolutionary overthrow.

No future without the overthrow of capitalism

Review – Falling Down: The Conservative Party and the Decline of Tory Britain by Phil Burton-Cartledge

Falling Down: The Conservative Party and the Decline of Tory Britain – book review