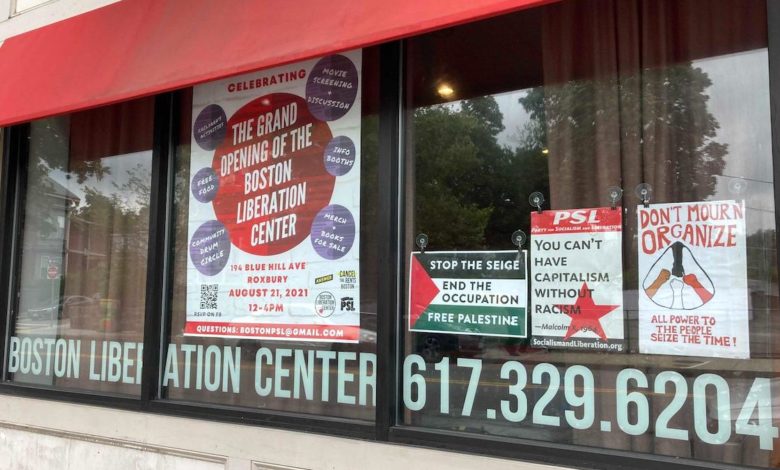 This new community space will be an educational and organizing hub for workers and oppressed people to connect, learn, and struggle together around the most crucial issues we face — from racist police brutality, never-ending wars and skyrocketing rents that push us out of our neighborhoods, to poverty wages, union busting, and disrespect on the job.

The BLC is staffed by local volunteer organizers from the Party for Socialism and Liberation, and houses other organizations and campaigns including the ANSWER — Act Now to Stop War and End Racism — Coalition and Cancel the Rents Boston.

Before the opening, the vacant yard next to the Center was overgrown and filled with trash. When BLC volunteers reached out to the City of Boston to clean up the lot, the City responded that they already did. Putting this blatant lie aside, volunteers stepped up and spent a week mowing, weed-whacking, and clearing out the trash to make it a safe and usable space. As they worked, residents stopped by to thank the volunteers and expressed their frustration with the City’s lack of maintenance.

By the morning of the opening, the yard was clean and full of local residents enjoying the space. More than 200 attended throughout the day. People stopped by to grab plates of food made by neighborhood restaurants Merengue and Blue Hill House of Pizza while children played in the yard and got creative at the arts and crafts table. Many danced to music provided by DJ WhySham, and local musician Toussaint the Liberator led a community drum circle. Jericho Movement Boston and Friends of the MST also came out to support the launch.

The afternoon included political education programming with several speakers discussing the importance of cultivating a revolutionary culture and the significance of Black August. There was a film screening of Can’t Jail the Revolution in solidarity with the Jailhouse Lawyers National Shut ‘Em Down demonstrations, followed by a discussion on the importance of studying and fighting for the release of political prisoners today.

The Boston Liberation Center is now fully up and running and will be open to the public every Wednesday 12 noon to 8 pm and Saturday 10 am to 4 pm Future programming will include drum circles and political prisoner letter-writing with Toussaint the Liberator, a public reading room and book store on Wednesdays and Saturdays, community forums on the third Friday of every month, and free film screenings on the fourth Friday of every month.

Reflecting on the importance of this space, local organizer and Roxbury resident Rachel Domond said, “So often, we — especially us here in Roxbury, along with Dorchester, Mattapan and other neighborhoods — are left in the dust. We have underfunded schools, lackluster public gathering spaces, inaccessible arts and culture institutions, and almost nowhere to actually learn our radical collective history and build out of for our collective future. But what we’re doing here with the BLC is something special. Our vision is to create a space where the working class in Boston can come together, struggle, and thrive.”