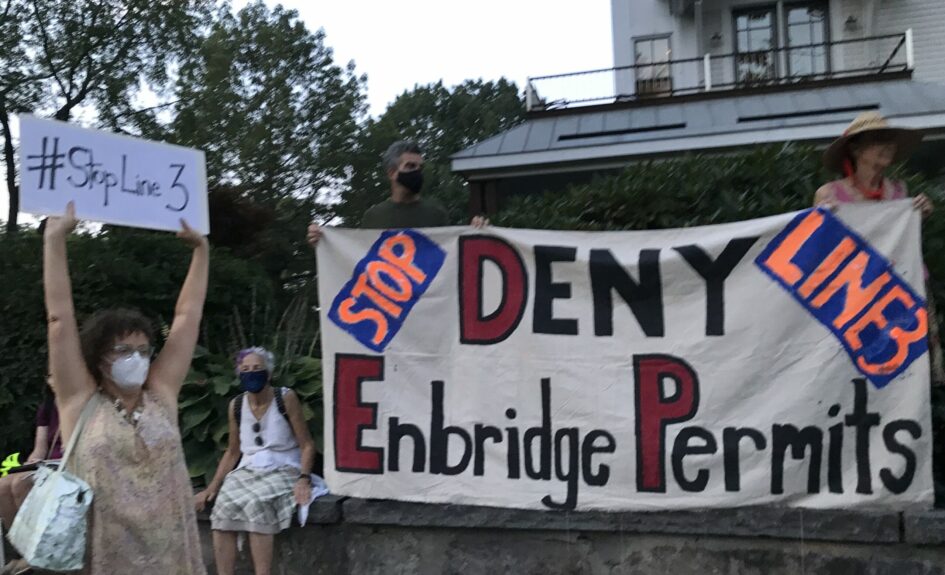 By AEzra El and Steve Gillis The large crowd, including some of McCarthy’s neighbors, marched in solidarity with Indigenous peoples to her luxury condo on Jamaica Pond to demand she end her deadly silence about Enbridge corporation’s destruction of the environment. Enbridge’s Line 3 pipeline carries tar sands oil from Alberta to Wisconsin, traversing stolen land and passing through Indigenous-held territory in violation of treaty rights.

After hearing from several speakers, shouting “Gina, do your job! stop Line 3!” and carrying a mock-up of a pipeline, the protesters delivered their collective grievance to McCarthy’s door. A climate justice activist recently arrested in Minnesota at Enbridge protests led the crowd in chanting, “We stand with Indigenous nations! F– the Enbridge corporation!”

McCarthy, a former head of the Environmental Protection Agency, has not spoken one word about the police terror and mass arrests being conducted daily against peaceful water protectors at Line 3. In fact, wealthy neighbors of McCarthy called the cops when representatives of the North American Indian Council of Boston delivered letters and a petition to her door.   #StopLine3   #LandBack