Brazilian Communist Party: “The crisis generated by the pandemic evidenced the superiority of Socialism” 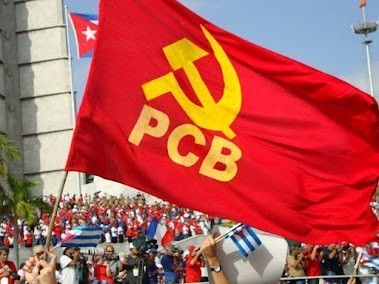 “Dear Comrades: Receive the fraternal and revolutionary greetings of the Brazilian Communist Party, which will celebrate its 100th anniversary next year. We recently successfully held our XVI Congress. The PCB is organized throughout the country and it’s present in the struggles of the workers and the youth.

The contradictions and the crisis of capitalism have become deeper and deeper and affect all sectors of social life. Big capital and its institutional representatives seek to overcome the crisis by destroying workers’ rights and guarantees, lowering wages, promoting mass layoffs, degrading the environment, restricting democratic freedoms and advancing against public funds to recover profit rates.

The capitalist mode of production is running out and represents a serious threat to the very existence of humanity. The concentration of wealth, the commodification of life, the war against peoples who do not accept the impositions of imperialism, the expansion of barbarism and poverty have intensified. It is increasingly clear that the necessary transformations to overcome this situation cannot be carried out under capitalism. The only way to overcome this tendency is to build socialism.

Class conciliation governments, in a world in which the bourgeoisies of each country are directly linked to international capital, tend to fail because they are unable to undertake fundamental changes in the ownership of the means of production and in the way in which power is exercised to mobilize the masses to break with capitalism. When they cease to be functional for the capital, they get discarded. Progressive reforms and advances have a clear limit dictated by bourgeois domination. Many leftist parties that have forged alliances with the bourgeoisie were co-opted by the bourgeois project and have turned into an instrument of order, as it’s happened with the reformist-progressive governments in Latin America.

We’re still living under the effects of the Covid-19 pandemic, which caused millions of deaths around the world, mainly in peripheral countries and in the poorest social layers. The crisis generated by the pandemic evidenced the superiority of Socialism, as in the example of Cuba, which, even under the economic blockade imposed by the United States, has defeated the Coronavirus and demonstrated its strong international solidarity by sending health personnel even to developed countries.

The Brazilian economy is oligopolistic and dominated by large international economic groups. The Brazilian crisis is part of the global systemic crisis, with the specific characteristics of a peripheral country with an economy subordinated to the main centers of capitalism.

The Bolsonaro government denied the pandemic and did not take the necessary measures in due time, causing more than 617,000 deaths and more than 22 million people infected and did not meet the demands of maintaining minnimun income and employment for the majority of the population, generating a situation of unemployment, hunger and despair. Bolsonaro has taken the ultra-liberal policy to an extreme, promoting the removal of workers’ rights, destroying Education, Science, privatizing state-owned companies, encouraging environmental degradation in favor of big business. Bolsonaro has incited actions by fascist groups in the streets and social networks, promoting misogynistic, racist and homophobic attacks and tried to intimidate workers’ movements and popular struggles, left-wing parties and organizations, and especially communists, with restrictions on democratic freedoms.

In early 2020, Bolsonaro blackmailed the country with threats of coup, fascist demonstrations and denial of the pandemic. The government delayed the purchase of vaccines. But the rapid deterioration of living conditions, the more widespread recognition of the severity of the pandemic and the subsequent advance of vaccination allowed the population to return to the streets again as of May 2021.

The Brazilian bourgeoisie remains united in defending its interests. Its political agenda has been advancing in Congress. Everything indicates that they’ve decided to keep Bolsonaro in power until the end of his term, in 2022, even with the failure of his government, that’s been abandoned by business, middle classes and popular segments.

The PCB has proposed and has been leading street demonstrations, together with other left-wing parties, in the “Down with Bolsonaro e Mourão” campaign, which has brought together many thousands of people in hundreds of Brazilian cities and has captured the growing dissatisfaction of the majority of the Brazilian population has compelled reformist segments to adhere. The PCB, contrary to some forces of the social democracy and even leftist ones which bet on the 2022 elections, prioritizes street actions.

One cannot underestimate the Bolsonaro government, which still has the support of various sectors of the ruling classes, expressive contingents from the middle classes and popular sectors encouraged by groups of evangelical leadres, criminal groups and segments of the Armed Forces and the military police. Even with Bolsonaro’s downfall, the so-called “Bolsonarism” tends to remain as an agglutination of conservatives, deniers, obscurantists, fascists and other groups.

The PCB understands that the struggles for the Brazilian revolution must be united in the Revolutionary Block of the Proletariat, a counter-hegemonic construction to face capital. The struggles against exploitation and for social rights are essentially anti-capitalist and anti-imperialist struggles that clash with the logic of the market. We undertake these struggles in a unity of action with other forces that oppose neoliberal policies, in defense of democratic freedoms and against fascism, and we build a class-based and revolutionary social and political front, centered on workers, youth and popular movements.

We’re working for the realization of a National Meeting of the Working Class with a program of struggles. We participate in all unitary struggle forums, and especially in the Unions’, Popular and Youth Forum for Democratic Rights and Freedoms, for the reorganization of our class. We take in elections because this is an important front for class struggle, even under the present difficult conditions imposed against revolutionary parties by economic power and the increasingly restrictive electoral legislation. The PCB maintains its political and class independence and will not participate in governments committed to capital.

The PCB undertakes actions of solidarity with all the peoples of the world attacked by imperialism and fascism, especially with the Cuban and Palestinian peoples, whose resistance to imperialist sabotage has been a reference for all revolutionaries in the world. We understand that it is important to advance in the construction of the international communist movement, by strengthening the revolutionary field, creating and strengthening the means and forms of joint actions to confront international capitalism, unifying the struggles of the world working class for the construction of the Socialist Revolution in all countries.

State Socialism and The Communist Manifesto