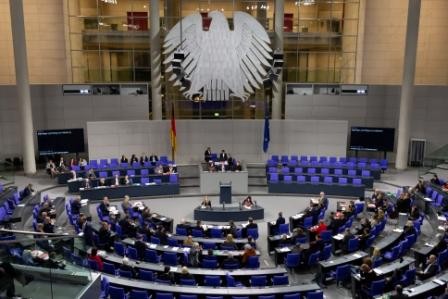 Consolidation on the Right, Catastrophe on the Left

Die Linke suffered a disastrous result. Far from its goal of a double-digit result and government participation, with 4.9 percent it failed to meet the threshold to enter parliament and lost over 2 million votes, almost half of its 2017 vote. Again, about half of the lost votes went to its two coalition partners of choice, the SPD and the Greens, according to preliminary estimates by Infratest dimap. However, because the party was able to defend three direct mandates in Leipzig (Sören Pellmann) and Berlin (Gesine Lötzsch and Gregor Gysi), it will enter the Bundestag after all with a group and presumably limited parliamentary rights via the “basic mandate clause”. The absolute worst case was thus narrowly avoided.

In the five eastern German states, Die Linke only achieved double-digit results in Thuringia (11.4 percent) and Mecklenburg-Western Pomerania (11.1 percent). In Brandenburg, with 8.5 percent, it is even behind the Greens (9.0 percent). The average for all five states was only 9.8 percent.

Tough inner-party struggles over the future direction of the party are foreseeable. On the surface, tactical weaknesses can be cited as reasons for the election result. In fact, these electoral tactical weaknesses are only the consequence of deeper problems and persistent strategic weaknesses. Like the CDU, Die Linke was also unable to change its leadership in time for the election due to the pandemic. Thus, the new party leadership hardly had time to set its own positive accents and thus set themselves apart.

Since the collapse of Hannelore Kraft’s minority government in North Rhine-Westphalia and Die Linke’s subsequent failure to win re-election to the state parliament in 2012, the party has been faced with the task of developing a strategy worthy of the name. Strategies are aimed at medium-term time horizons, i.e. more than one legislative term. They include programmatic electoral promises on general, normative political principles, answers to questions of what role vote maximization and/or political bargaining power should play, and what electoral promises can be fulfilled given the balance of forces between the different parties. Such considerations are probably not lacking in Die Linke—on the contrary. What is lacking, however, is a strategic centre that could rally party activists behind a strategy that would enable them to persuade voters to support the party’s programme. This is the task the party leadership will have to accomplish in the next two years: to recognize and work through the “mistakes of the last years” and “redevelop the party”, as party co-chair Susanne Hennig-Wellsow stated on Sunday evening.

The Free Democrats (FDP) enter the new Bundestag with a solid double-digit result. Again, it owes its victory to a campaign around party leader Christian Lindner. It is striking that voters ascribe the party considerable competence in “digitalization”, especially young (male) voters. At the same time, a small social-liberal “wing” has emerged in recent years as an antithesis to an understanding of the state and freedom that Christian Lindner promotes: the state as a bureaucratic monster that needs to be curtailed and tamed.

The FDP managed to present itself as a moderate civil rights critic of the pandemic measures. In doing so, it treaded a fine line between liberal-democratic civil rights and libertarian contempt for the state, which regards all state activity as a threat to the freedoms of the free-market cowboy. Above all, however, Lindner’s FDP profited from the weakness of the CDU/CSU and the strength of the SPD: the CDU/CSU no longer appeared strong enough to appoint the chancellor in a two-party alliance (with the Greens), while the SPD grew strong enough in the polls to appoint the chancellor in a three-party alliance. In both cases, the FDP would play a central role: together with the Greens, it could make Armin Laschet chancellor and prevent a “left-wing government” under Olaf Scholz. The party of the free market has not been ascribed this much importance in the run-up to an election in quite some time. Lindner fuelled this importance with his demonstrative ambitions for the post of finance minister. In 2021, it is better to govern badly than not at all.

With small losses, the AfD enters the German Bundestag for the second time. It will probably no longer be the largest opposition party (unless the SPD and CDU form a coalition again). In Thuringia, where the party is led by the notorious far-right extremist Björn Höcke, it became the strongest party with 24 percent (and 5 direct seats), as well as in Saxony with 24.6 percent (and 10 direct mandates). In the other three eastern German states, its result ranged between 18 percent and 19.6 percent.

The AfD’s results—together with the state election results, all of which led to a slightly weakened return to parliament—show that the party has established itself in the party system and has succeeded in building up a core electorate. This core electorate in many regions of the country seems to be linked to the formation of its own political milieus, which, by shutting themselves off from the flow of social information and public debate, have created their own information channels, group convictions, and realities. After the Bundestag elections, the party will decide on its future path: transformation into a parliamentary party that seeks to become part of a conservative bloc, or continuing as a movement party using every emerging protest against state policies as an opportunity for radicalization and hostility to democracy.

What Were Voters’ Primary Concerns?

When voters were asked on election day what they were “very concerned” about, they were given a choice of topics that largely corresponded to party-political divisions: the concern that too many foreigners are coming to Germany was shared by supporters of the FDP and the AfD; the concern that Islam has too much influence was shared by the majority of AfD voters, less so by the FDP and the CDU/CSU, and also to some extent by SPD voters. Concerns about living standards were concentrated among AfD voters, as was concern about Germany changing too much. Concern about the consequences of climate change united supporters from Die Linke to the CDU, and was also slightly predominant among the FDP, but no longer among the AfD.

Despite all the debates around social division, the growing gap between rich and poor, and the threat to the social centre, a majority of voters thought that things are “more fair” than unfair in Germany. More than two-thirds of the supporters of the CDU/CSU, the Greens, and the FDP were of this opinion, along with a slight majority of SPD supporters. Only the supporters of Die Linke and the AfD see things radically differently. A future federal government, whether led by the SPD or the CDU, would therefore be a government whose supporters consider the existing social order to be “rather fair”.

However, the reasons for the electoral decision are not necessarily to be found in these views, concerns, and wishes. According to Infratest, 48 percent of SPD voters say that without Olaf Scholz they would not have voted for the SPD. This roughly corresponds to the polling figures at the end of 2020/beginning of 2021.

Regardless of who ends up forming the next government in Germany, it will have to deal with a number of political issues that were more or less treated as elephants in the room during the election campaign:

The coming government will be faced with the task of getting major initiatives off the ground in four years that will have a massive impact on living conditions in 20 to 30 years and beyond. Even if this task were to be tackled courageously, there is nothing to suggest that the political balance of power will stabilize under intensified conditions of transformation. Indeed, it is quite possible that the next government will only be a transitional government.

originally published at the (modified)

German election: unsteady as she goes