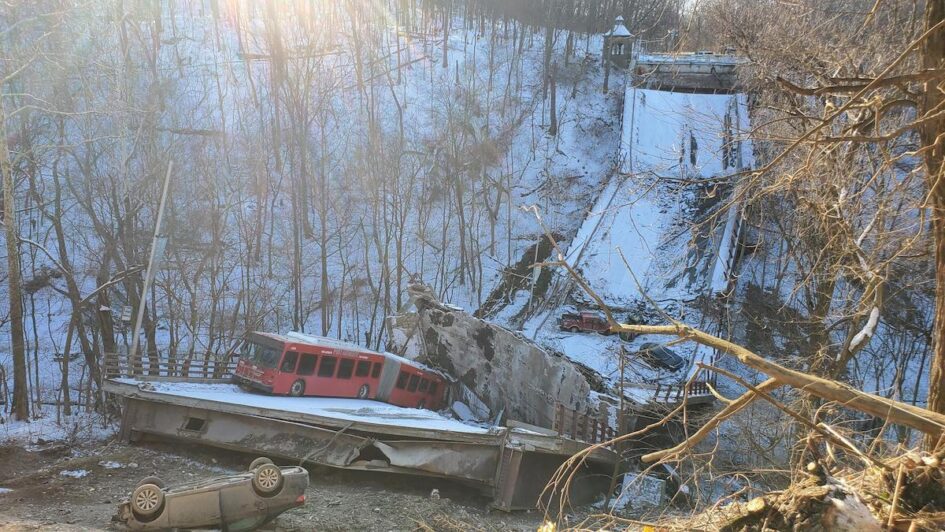 In the early morning hours of January 28, a bridge that connects the working-class neighborhoods of Swissvale, Edgewood, Wilkinsburg and Regent Square to other parts of the city of Pittsburgh collapsed. Workers were cut off from their normal commute after the busy bridge completely crumbled and fell into the ravine below.

The bridge failure occurred mere hours before Biden was slated to give a speech in Pittsburgh on the need for infrastructure funding via the Build Back Better bill. About 10 cars and a bus went down with the bridge, and multiple people have sustained non-life-threatening injuries.

Thankfully, no one was seriously hurt, and due to overnight snow and resulting school delay, fewer people were on the bridge compared to a usual day. However, this offered little relief to working Pittsburghers who have witnessed the city’s crumbling infrastructure for years.

Local resident Milo Minic spoke with Liberation News close to the scene of the collapse. Reflecting the experience of so many Pittsburghers, he commented on the difficulty of simply getting from place to place with the poor state of roads. “I used to skate to get around, but it’s really hard with Pittsburgh roads, with all the potholes and cracks. I usually walk now.”

The irony of Biden’s visit to Pittsburgh on the same day was not lost. Many people Liberation News spoke with near the site of the bridge collapse voiced strong support for new funding in infrastructure, which they realize is long overdue. Liberation spoke with Pittsburgh native Karen Chin, who noted: “Pittsburgh is known for its bridges, so for this to be happening, especially when Biden is due to arrive… If you didn’t know, you know now. We need money!”

The catastrophic bridge collapse, however, may not have been entirely sudden. A tweet from a local resident from 2018 resurfaced shortly after the collapse. A photo showed one of the support beams of the bridge entirely rusted through and falling off of the bridge. The concerned Pittsburgher tagged Pittsburgh 311, a public works response center, which then responded that a ticket had been opened. Records show that the ticket was quickly closed and the beam was not fixed.

A history of neglected public roads

Pittsburgh is no stranger to high-spectacle public infrastructure failures. In Fall 2019, a bus famously fell into the ground in downtown Pittsburgh when a sinkhole under the street opened up spontaneously. It was later discovered that water had washed away all the fill under the road, causing a dangerous situation that finally culminated in the sinkhole. If money had been allocated for regular inspection, the crisis may have been averted.

Bridges have also not been nearly as foolproof as one may expect in the “City of Bridges.” In 2016, a fire erupted on the Liberty Bridge, a bridge that thousands of working Pittsburghers cross daily. The root cause was discovered to be dangerous cost-cutting by the contractor, who wanted to maximize profits by minimizing costs for construction zone safety.

It is unclear when the bridge will be rebuilt, but given the scale of the collapse, it will take some time. Working people from the affected neighborhoods will have to learn how to navigate around their main passage to much of the rest of Pittsburgh. Residents hope that no other bridges in various states of disrepair will cause future, deadlier incidents.

Infrastructure in the United States is falling apart, and it’s working people who have to suffer the fallout. Corporate drive for ever-increasing exploitation that cares about profit more than human lives and city budgets that do not prioritize the needs of its citizens are to blame.

At the city, state and federal level, instead of funding direly needed infrastructure projects, money is continually pumped into police coffers. Each year, the city of Pittsburgh prioritizes money for over-policing that is killing working-class and Black Pittsburghers.

The city’s budget reporting indicates the 2021 police budget was $106 million. Meanwhile, only about $7 million is allocated for bridge maintenance. At the state level, taxes levied on people’s transportation, such as gas taxes and vehicle registration fees, are not being funneled back into transportation needs. Instead, $500 million of this fund each year is allocated to state troopers who kill Pennsylvanians, including teenager Christian Hall just two years ago. The multi-million dollar police budget could instead be funding the upkeep of roads and bridges that thousands of people use every single day.

Pittsburghers demand money for bridges, not for war

The morning after the bridge collapse, community members in Pittsburgh rallied to demand an end to U.S. warmongering against Russia. The recent bridge failure was contrasted against the seemingly unlimited funds allocated for imperialism and war. Signs held by attendees demanded, “Money for Bridges, not for War!”

Party for Socialism and Liberation member Taylor Goel begged for answers: “How is it that when it comes to repairing or rebuilding bridges, funding public schools, providing healthcare to the millions who don’t have it, that the so-called ‘superpower,’ the U.S. has no money… That’s what we’re told…, but when it comes to waging wars, there is all of the sudden unlimited amounts of money?”

Build Back Better — too little, too late

The truth of the terrifying spectacle of the bridge collapse is that it was entirely preventable. The Build Back Better bill will provide some greatly needed funds to update infrastructure, but these are funds that should have been available long ago and will barely even begin to meet the amount needed to ensure all bridges in Pittsburgh are safe to use.

Reports show that 29 bridges in Pittsburgh, including the Fern Hollow bridge that collapsed Friday, are rated as poor by inspectors. The Build Back Better bill would grant $1.6 billion to update bridges in Pennsylvania. An estimated $458 million is needed to address bridge-related structural problems in the city of Pittsburgh alone, not to mention bridges across the entire state.

The bridge collapse in Pittsburgh is a grave reminder of the dire state of infrastructure that has not been maintained for decades. Budgets that prioritize policing, war, and profits over public safety put people’s lives at risk. The working class of Pittsburgh demands budgets that prioritize their safety and well-being, not corporate profits and ruling class interests.

Biden’s spending bill, infrastructure, and a looming government shutdown: What the hell is going on?

What if the Doomsday Glacier Collapses?

Cadres Of CPI (Maoist) Blow Up Bridge In Giridih District