Briefing: World hunger and the war in Ukraine 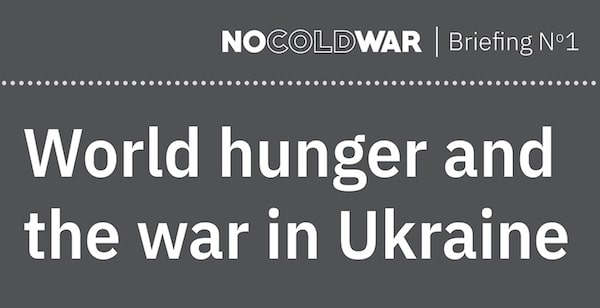 The war in Ukraine, along with sanctions imposed by the United States and Western countries against Russia, have caused global food, fertiliser, and fuel prices to ‘skyrocket’ and endanger the world food supply. This conflict is exacerbating the existing crisis of global hunger and imperils the living standards and well-being of billions of people–particularly in the Global South.

War in the ‘breadbasket of the world’

The current crisis threatens to cause a global food shortage. The United Nations has estimated that up to 30 percent of Ukrainian farmland could become a warzone; in addition, due to sanctions, Russia has been severely restricted in exporting food, fertiliser, and fuel. This has caused global prices to surge. Since the war began, wheat prices have increased by 21 percent, barley by 33 percent, and some fertilisers by 40 percent.

The Global South is ‘getting pummelled’

The painful impact of this shock is being felt by people around the world, but most sharply in the Global South. ‘In a word, developing countries are getting pummelled,’ United Nations Secretary-General António Guterres recently remarked.

Countries of the Global South are already facing severe price shocks and shortages, impacting both consumption and production. In Kenya, bread prices have risen by 40 percent in some areas and, in Lebanon, by 70 percent. Meanwhile, Brazil, the world’s largest producer of soybeans, is facing a major reduction in crop yields. The country purchases close to half of its potash fertiliser from Russia and neighbouring Belarus (which is also being sanctioned)–it has only a three month supply remaining with farmers being instructed to ration.

‘The United States has sanctioned the whole world’

The situation is being directly exacerbated by U.S. and Western sanctions against Russia. Although sanctions have been justified as targeting Russian government leaders and elites, such measures hurt all people, particularly vulnerable groups, and are having global ramifications.

How many millions are going to starve to death because of the lack of these fertilisers?

Nooruddin Zaker Ahmadi, director of an Afghan import company, made the following diagnosis:

The war in Ukraine and associated sanctions are exacerbating the already existing crisis of world hunger. The UN’s Food and Agriculture Organisation found that ‘nearly one in three people in the world (2.37 billion) did not have access to adequate food in 2020.’ In recent years, the situation has worsened as food prices have risen due largely to the COVID-19 pandemic, climate change, and related disruptions.

‘Ukraine has only compounded a catastrophe on top of a catastrophe,’ said David M. Beasley, the executive director of the UN World Food Program.

There is no precedent even close to this since World War II.

‘If you think we’ve got hell on earth now, you just get ready,’ Beasley warned.

Regardless of the different opinions on Ukraine, it is clear that billions of people around the world will suffer from this hunger crisis until the war and sanctions come to an end.

The US, Russia and Ukraine: Thinking Beyond the New Cold War and World War 3

Hunger in the world’s breadbasket

fuckyeahmarxismleninism:Special Briefing on U.S./NATO war on…