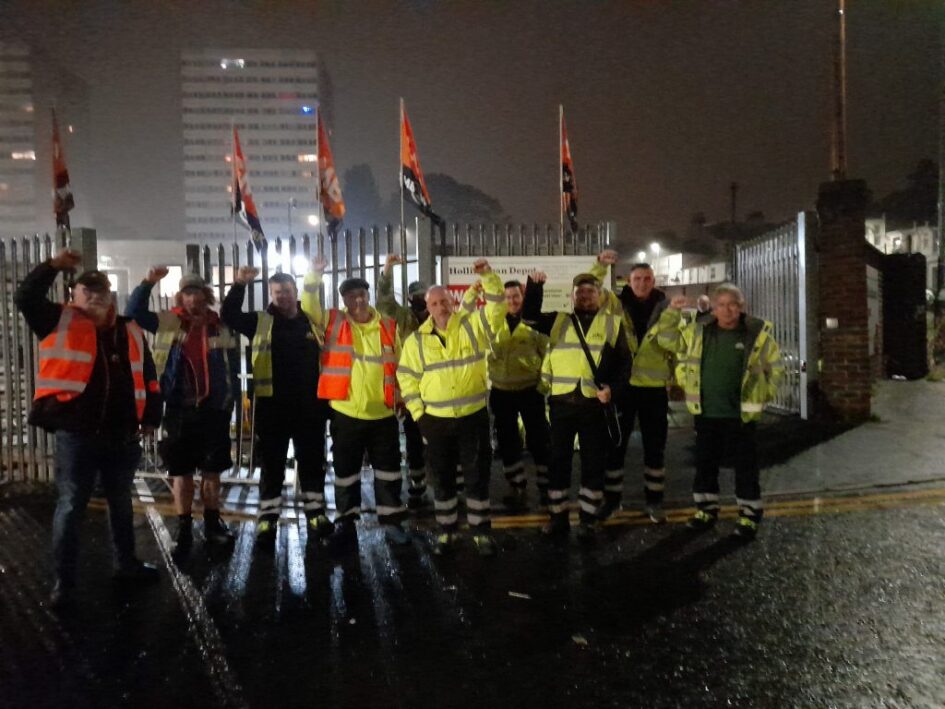 Brighton refuse workers are taking a 14 day strike called after management at the Hollingdean depot tried to change the rounds of 54 HGV drivers without following any of the procedures agreed between management and the unions.

Management and the council were given 2 weeks to settle the dispute but failed to engage in meaningful discussion, despite the willingness of the GMB union to talk.

Management have tried to bully workers at the depot in the past. I spoke to GMB organiser Gary Palmer on a well attended and lively picket at 5am on Friday morning (the 8th October).

Among other things, he made the point that workers could be disciplined for not following procedures and that the local management of the waste depot should be treated the same way by the Green council. Management have suggested that they could negotiate new procedures, but the existing ones were negotiated between the GMB and management anyway.

Local paper The Argus conducted an online poll with 23% of local residents backing the workers, no doubt that figure will be much higher amongst trade union members.

The vast majority of truck and lorry drivers have been respecting the picket line, as have postal workers.

The street cleaning crews are not technically involved in the dispute, but I was told that one lorry driver delivering fuel to the street cleaning depot refused to respect the picket line and was rapidly stopped when 150 workers came out from the depot to support the picket. As Gary put it ‘ If we all come out together, they cannot beat us’. The strike is due to end on Sunday the 17th October, but the workers already have a mandate to take a further 14 days of strike action, beginning on Wednesday the 20th, if management and the council do not take the steps necessary to end the dispute.

The picket has been supported by local socialists and trade unionists and even a local MP. Gary said that local people can support the dispute further by badgering councillors to make management follow their own procedures.

Currently the GMB is financially supporting the strikers but messages of support could be sent to Gary at the local GMB union office in Brighton, or branch secretary Mark Turner at [email protected]. You can call the Brighton & Hove office on 01273 827460.

The strikers will welcome anyone who wants to join the picket line to show their solidarity. Pickets start from 4.30am and go until lunchtime at the main gate of Hollingdean depot on Upper Hollingdean Road BN1 7GA.

How the US helped create Osama bin Laden

No justice? No bourbon! Distillery workers in Kentucky go on strike

Kellogg’s workers on strike in Michigan