Britain: Four cleared by court jury over role in toppling statue of slave-trader 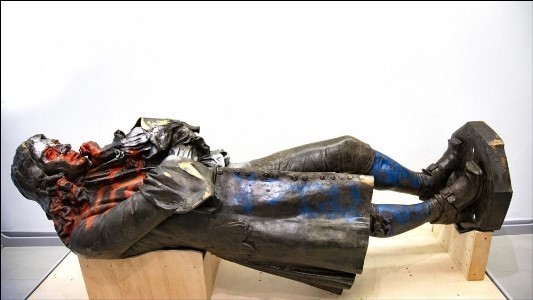 There were jubilant scenes outside Bristol Crown Court as four people were cleared for their role in the toppling of the statue of slave-trader Edward Colston. The statue was pulled down and subsequently dumped into Bristol harbour during a Black Lives Matter demonstration in June 2020.

Of the thousands of people demonstrating and the hundreds that helped pull down and dispose of the statue, four were taken to trial, accused of criminal damage. While admitting their actions, the defendants claimed they were lawful as they prevented the greater crime of public indecency.

The defence argued that, due to Colston’s role in the horrors of the slave trade, the presence of his statue was deeply offensive, particularly to black Bristolians. The jury agreed, acquitting them by a majority decision. In weighing up whether the statue constituted a crime they will ultimately have voted on conscience.

Bristol’s Labour mayor Marvin Rees said he had “no reaction” to the verdict but claimed it had “very little to do with the drive to tackle race and class inequality”. However, the verdict reflects changing attitudes on racism and Britain’s role in the slave trade, partly driven by the Black Lives Matter movement itself. A poll by the Bristol Post taken at the time showed 61% of Bristolians supported the toppling of the statue with just 20% opposed.

Rees was Europe’s first directly elected black mayor and has spoken on racism. His comments on the trial are an attempt to deflect criticism that his administration, like all those before it, has done nothing to remove the statue, despite repeated demands from Bristol citizens. Even efforts to add a plaque referring to Colston’s role as a slave trader had been thwarted.

Boris Johnson has said protesters shouldn’t “retrospectively change our history”. But for 125 years the statue had stood above a plaque declaring Colston one of Bristol’s “most virtuous and wise sons”. Only after its toppling does it lie, still on its side, in a museum, with the real history explained.

Predictably, the not guilty verdict for the Colston Four has attracted criticism, including from Tory politicians. Transport secretary Grant Shapps has said: “We’re not in a country where destroying public property can ever be acceptable.” These comments contradict those of senior Conservative Bristol councillor, Richard Eddy. Speaking in 2018 about a possible plaque explaining Colston’s real history, he said: “I cannot condemn anyone who damages or removes it.” For the Tories, the validity of damaging property is clearly a question of intentions.

Tory MP and former cabinet minister Robert Jenrick said the verdict undermines the rule of law. However, the right to trial by a jury of your peers is an important part of the British judicial system. It provides ordinary people with a fighting chance in a system that is heavily stacked against them. The Colston Four were acquitted despite political pressure. The Home Secretary contacted both the prosecution and police about the case, a breach of the normal constitutional conventions.

This case has implications for the Tories’ Police, Crime, Sentencing and Courts Bill which is currently going through parliament. This draconian law attempts to clamp down on the right to protest. It includes ten years’ imprisonment for damaging statues. It is being brought forward now as the Tories and the bosses fear bigger movements against them in the near future.

The bill must continue to be opposed. However, the ability to pass such laws and to implement them are two different things. Juries could also refuse to condemn those whose only ‘crime’ is a peaceful protest. The bigger a movement and the greater the public support – the harder a prosecution becomes.

The Colston Four is not the only example of juries acquitting activists charged with criminal damage, despite participants admitting their involvement. Others include environmental and anti-war protesters. The Prison Officers’ Association has avoided punishment for protests declared to be illegal strike action. Unite the Union removed the words ‘within the law’ from its rules relating to disputes and under the previous leader Len McCluskey refused to repudiate unofficial strikes.

Ultimately, implementing authoritarian laws depends on the balance of class forces. Struggles by the working class have the ability to alter this.

The verdict of the Colston Four is the correct one. But the Black Lives Matter movement was never just about the symbolism of statues or the crimes of the past, it is about opposing systemic racism today. In fighting against all the injustices in a capitalist society we must be willing to defy unjust laws to get results.

Found not guilty by jury, Rittenhouse still faces attacks on his political rights

Racist Teddy Roosevelt Statue to Relocate to North Dakota; Tribal Leaders Say They Were Not Consulted