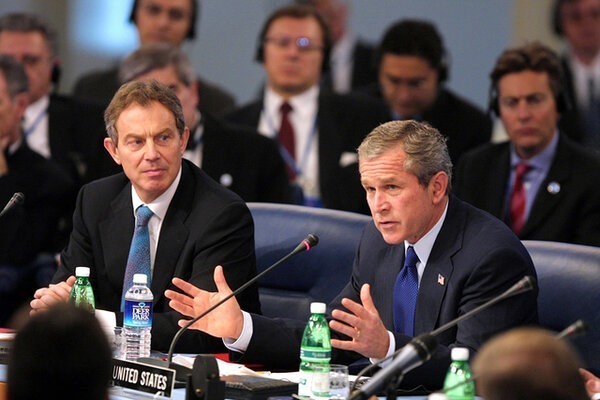 No one should be in any doubt that Afghanistan was Britain’s war as much as it was the US’s.

Even before the 2001 invasion, Labour prime minister Tony Blair was trumpeting Britain’s use of military power to replace governments it didn’t like.

When Britain sent troops into Sierra Leone and then Kosovo, his New Labour supporters called it “humanitarian intervention”.

Only the West could save these “backward” societies from ­themselves, they argued. They said “liberation” could best be achieved with aerial bombardment.

Blair took his bombast with him into Afghanistan. He told the Labour Party conference in 2001, “This is a battle with only one outcome—our victory not theirs.”

The entire political establishment fell into line with Blair as soon as the first Western shots were fired.

Liberal newspapers ran gushing pieces that talked of Britain acting as a civilising force, helping to build a new nation of democratic rights where previously there had been none.

They rushed to give Blair crucial ­ideological support as the British public became increasingly sceptical.

A foreign policy mentor to Tony Blair wrote in The Observer ­newspaper, in 2002, “When ­dealing with old-fashioned states outside the postmodern ­continent of Europe, we need to revert to the rougher ­methods of an earlier era”.

These were “force, pre-emptive attack, deception, whatever is ­necessary to deal with those who still live in the 19th century world of every state for itself.”

But the talk of surgical strikes and quick victory soon gave way to a long occupation, and Nato moved the conflict from “peace keeping” to “combat mission”.

He faced prison after going on the run rather than returning to the fighting.

Recalling his posting in Kandahar in 2006 he said, “The Afghan people were attacking us, even though our politicians said we were going in to help them.

“It came as a real shock. That’s when I became aware that there was something seriously wrong with the war.”

But the pressure to stay in Afghanistan continued into the ­coalition government in 2010 and the Tory administrations that followed.

To leave now would be to admit defeat, said the generals—and ­hundreds of British lives would have been lost for nothing. The thousands of Afghan lives lost barely rated a mention.

As the US under president Trump started withdrawal negotiations with the Taliban, the British fought a rear-guard action to stay in.

Tory defence secretary Ben Wallace last week told the Daily Mail newspaper, “It became apparent pretty quickly that, without the United States as the framework nation it had been, these options were closed off.

“All of us were saddened, from the Prime Minister down, about all the blood and treasure that had been spent, that this was how it was ending.”

Anti-war sentiment spread quickly after Britain and the US launched its first wave of bombs on Afghanistan on 7 October 2001.

Over 50,000 people joined the first national protest in London the following weekend.

The scale and breadth of the demonstration convinced many that a mass anti-war could be built. One of its distinguishing features was the large presence of Muslims and young people.

The Guardian newspaper reported, “Government ministers were surprised by the size of the anti-war demonstration.”

Riaz Ali told Socialist Worker at the time, “I have come down with friends from the mosque in Birmingham.

“When the missiles started to fall on ordinary people in Afghanistan I knew I had to be here.

“I do not care if people are Muslim or not. If they are prepared to fight to stop this war then they are my brothers and sisters.”

As Tony Blair and president George Bush ramped up their war drive, anti-Muslim sentiment rose quickly too. Muslims were portrayed in the media as “Medieval”, “backward” and “easily led”. An understanding of this gave rise to the term “Islamophobia”.

The newly formed Stop the War Coalition made combatting it one of the group’s core aims. The next demonstration came in November and was around double the size of the first.

But despite the pressure, Tony Blair and his liberal backers ensured there was no parliamentary vote on whether British troops should be in Afghanistan until 2010.

The pressure of the anti-war movement continued to grow as casualties mounted, despite the rapid fall of the Taliban government.

United Nations buildings were hit. There were multiple incidents of “friendly fire” in which Western troops mistakenly killed each other.

And a Taliban bombing campaign killed even leading government officials. As Afghanistan quickly descended into the chaos of Western bloodshed and then civil war, a new conflict was looming.

Bush and Blair now had their sights set on Iraq.

The 2003 invasion would lead to a storm of anger against imperialism—and the biggest street protest in British history.