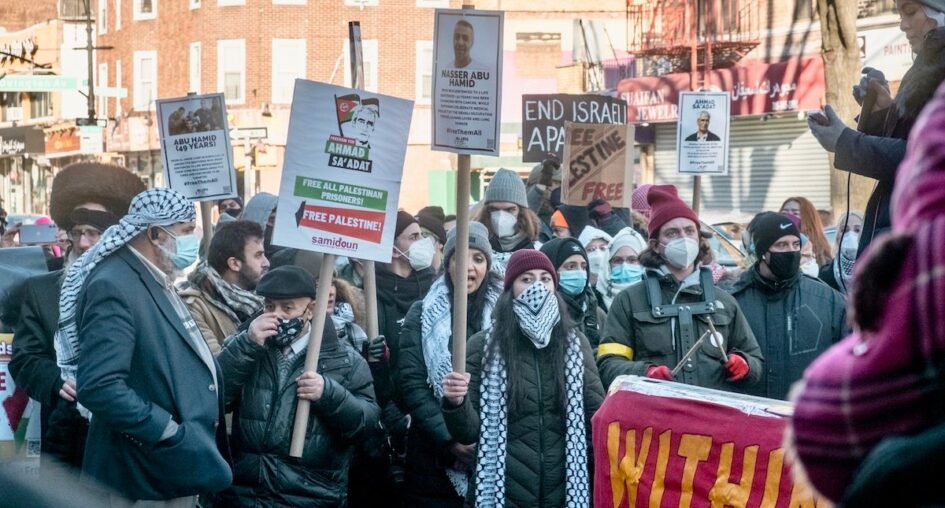 “Free free Palestine, long live Palestine!” chanted a crowd of over 100 demonstrators as they rallied in the largely Palestinian neighborhood of Bay Ridge, Brooklyn on Jan. 22. The event was the culmination of an international week of action calling for the release of Ahmad Sa’adat, and 4,600 other Palestinians political prisoners held in Israeli jails.

Sa’adat is the General Secretary of the Popular Front for the Liberation of Palestine and has been a political prisoner for nearly two decades. This year marked the 20th anniversary of his arrest by the Palestinian Authority, who imprisoned him from 2002-2006. Following that sentence, Israeli forces arrested Sa’adat in 2006 and charged him with “incitement” and leading a “prohibited organization.” They sentenced him to 30 years imprisonment, which he is currently serving.

Held annually since 2008, this year’s action was endorsed by 85 organizations globally, including Samidoun Palestinian Prisoner Solidarity Network, Jewish Network for Palestine, and Palestine Action, and included more than two dozen events around the world.

In Brooklyn, speaking were representatives from the Palestinian Youth Movement, Jewish Voice for Peace, Samidoun Palestinian Prisoner Solidarity Network, and Within Our Lifetime, among others. A delegation from Party for Socialism and Liberation participated in the action.

‘We must struggle together’

The rally comes the same week as a re-escalation of violence in the East Jerusalem neighborhood of Sheikh Jarrah, where Israeli forces violently evicted two Palestinian families and destroyed their homes. Last year’s attacks on Sheikh Jarrah sparked global uprisings of historic proportion.

“We believe in the full liberation of our land and the return of our people to Palestine,” said Palestinian Youth Movement organizer, Tamar (last name withheld). “As Palestinian youth in the diaspora, particularly in the belly of the beast, we believe that we have a duty and a responsibility to assume an active role in our people’s struggle for national liberation against the forces of Zionism, colonialism, racism, and imperialism.”

Tamar emphasized the connections between people’s struggles in New York and the continued resistance of the Palestinian people.

“A week ago today, New York State has ended its eviction moratorium, COVID is still rampaging, and the streets are deadly cold … the only reason to start the eviction machine up again is to appease the real estate lobby who thinks of your home as nothing more but a line in their ledgers,” they said. “Our struggle for Palestinian liberation is one that fights all systems of oppression and recognizes that every force that attempts to exile us, police us, surveil us, incarcerate us, must be dismantled. Our liberation is linked with the liberation of all oppressed people, including our Black, brown, and Indigenous siblings. I make these connections not to say that these fights are the same, but to show how Zionist settler colonial violence, American settler colonial violence, and capitalism all operate along similar lines and for similar purposes.”

Sa’adat would agree with Tamar’s sentiments. During the climax of the rally, organizers read a letter from 2019 he had wrote from Ramon Prison in Occupied Palestine in 2019.

“The goal of every struggling revolutionary prisoner, whether in the prisons of the U.S., the Philippines, Turkey or the Zionist jails in Palestine, is to obtain freedom, not a momentary amelioration of torture,” Sa’adat wrote. “We are not simply seeking to moderate or reform the social and economic conditions of our people. We must be clear: we are struggling for socialism, for an alternative world -— and in order to achieve victory, we must struggle together.”

“Previously Unknown Massacres”: Why is Israel Allowed to Own Palestinian History?