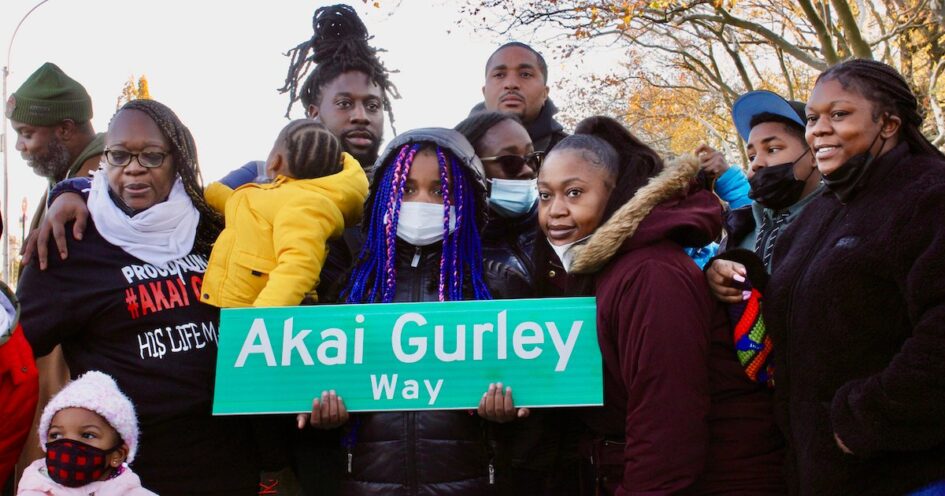 On Nov. 20, about 30 people gathered in the East New York neighborhood of Brooklyn, NY,  to celebrate the renaming of a street in honor of Akai Gurley, a young Black man who was murdered by the New York Police Department. The date marked the seventh anniversary of Gurley’s death, and the street naming served both to honor Gurley’s legacy and as a standing reminder of the ruthless nature of police violence.

The ceremony took place near the Pink Houses housing projects where Gurley was killed. It was attended by Gurley’s family and other families of victims of police violence, elected officials such as Community Board 5 Chairman Andre T. Mitchell, New York City Council member Inez Barron, and New York State Assembly member Charles Barron, and organizations such as the ANSWER coalition and the Party for Socialism and Liberation (PSL).

Gurley was fatally shot in a dark stairwell at the Pink Houses housing projects by NYPD Officer Peter Liang on Nov. 20, 2014. Unlit stairwells and dysfunctional elevators are not an uncommon given New York City Housing Authority’s (NYCHA) persistent refusal to maintain and improve its buildings, and the Pink Houses are some of the most poorly maintained and neglected in public housing.

With their guns drawn, Liang and his partner were executing an illegal vertical patrol, in which officers descend from the top of the building to each floor, stopping to question those they deem “suspicious.” Gurley and his partner entered the dark seventh floor stairwell fourteen steps below the officers. Hearing a noise in the dark, Liang fired his weapon. The shot ricocheted off a wall and fatally struck Gurley in the chest.

A jury convicted Liang of manslaughter, which a court later reduced to criminally negligent homicide. Despite a guilty verdict, Liang never saw jail time and was sentenced to only five years probation and 800 hours of community service.

Seven years after Gurley’s murder, the intersection of Linden Boulevard with Eldert Lane near the Pink Houses complex where he was killed will now be known as Akai Gurley Way. Despite the grim nature of Gurley’s death, people gathered at the street corner with a sense of celebration.

“In some small way we’re gonna get something,” said Hertencia Petersen, Gurley’s aunt, who has advocated for justice for his case for years. “I’m so elated and overwhelmed that the community came out.”

This street naming was not only a victory for Gurley’s family, but also a testament to the power of community when all members’ efforts are united and directed at a single goal. Community organizers including Gurley’s family members, PSL, New Black Panther Party, Existence is Resistance, Shut it Down NYC, and legal personnel worked together to make the street naming official.

“We petitioned for this street at the height of the pandemic,” said ANSWER organizer Kerbie Joseph. “We came out to this neighborhood and spoke to people about the case — a case that was at the time six years old, but that everybody remembered! And everybody put their signature down to make sure there was a street in honor of Akai Gurley!”

Speakers reminded the crowd that the current crisis of police violence against the Black community was untenable, an explosion waiting to erupt.