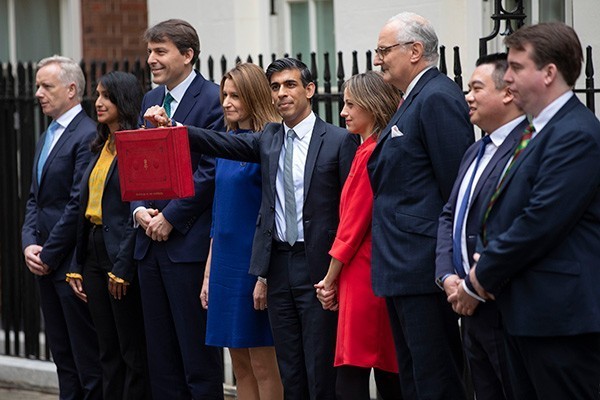 Sunak is pointing to the right with his budget (Pic: HM Treasury on Flickr)

Tory Chancellor Rishi Sunak claims that the budget and spending review on Wednesday will “deliver a stronger economy for the British people”. In reality it confirms that the Tories want working class people to pay for the government’s disastrous handling of Covid.

Bankers can sip some of that as they celebrate Sunak confirming a cut in the levy on their profits.

Baked into all his announcements is the end of the triple lock for pension increases, the National Insurance rise that hits nearly every worker, and the brutal removal of the £20 a week Universal Credit (UC) uplift.

Sunak announced a cut to the UC taper rate—the amount that claimants lose as they earn above a certain threshold.

This is presented as a £2 billion gift to the poorest workers. But it offers nothing to those on UC who are not in work—the majority, including many disabled people. And the withdrawal of the UC uplift snatched £6 billion a year.

Sunak’s empty promise will mean a single working parent on a minimum wage, part time contract will still lose £361 next year, despite the taper change.

There was virtually nothing on climate change. Outrageously, just before the Cop26 climate conference, Sunak announced he was lowering the tax duty for short distance air passenger flights within Britain from April 2023. 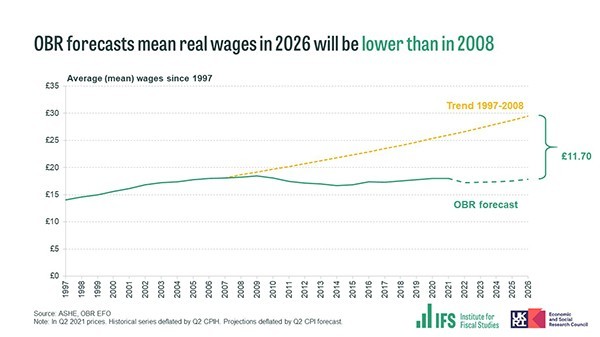 Wages are officially predicted to be lower in five years than they were in 2008 (Pic: IFS)

So as the Tories present themselves as “climate leaders” at Cop26 they hypocritically encourage people to fly from, say, Manchester or Liverpool to London rather than go by train or bus.

All public sector departments are set for a funding increase. But due to decades of austerity, over half will be worse off than in 2010.

Sunak tried to bask in an extra £4.9 billion for schools. All that does is take spending back to 2010 levels of funding per pupil.

As Labour MP Richard Burgon said, “What that really means is that the Tories don’t think that it’s worth spending a single penny more on our children’s education over 15 years.”

Sunak has also announced a small £300 million “start for life” fund for families. He claims this is because “the first 1,001 days of a child’s life are the most important”.

But the UC uplift withdrawal means families will lose £1,040 each year and since 2010 the Tories closed 1,300 Sure Start centres.

There are also long-term trends that the budget has done nothing to change. After looking at the background documents to Wednesday’s announcements, the Institute for Fiscal Studies tweeted “Real wages are expected to remain stagnant for 20 years. In 2026, wages are forecast to be £11.70 an hour lower than if the pre-2008 trend in wage growth had continued.”

Another hidden-away figure showed a £6 billion rise in council tax that will hit ordinary people.

And the Office for Budget Responsibility said that is forecasts included the possibility of inflation peaking officially at close to 5 percent next year and possibly hitting its highest rate for 30 years.

That would mean any worker who doesn’t win a pay rise of at least 5 percent is facing a pay cut in real terms.

The Unite union general secretary Sharon Graham said, “The chancellor’s statement makes it clear that the government wants workers to pay for the pandemic. Their incomes are under attack from tax rises and inflation while the super-rich will continue to prosper. That is not acceptable.”

Sunak’s free market, pro-business philosophy was summed up on Wednesday when he said, “Do we want to live in a country where the response to every question is, ‘What is the government going to do about it?’

“Or do we choose to recognise that government has limits, government should have limits?”

And although Labour made criticisms of aspects of the budget, there was no clear call for what should be the obvious policy—make the rich and the corporations pay.