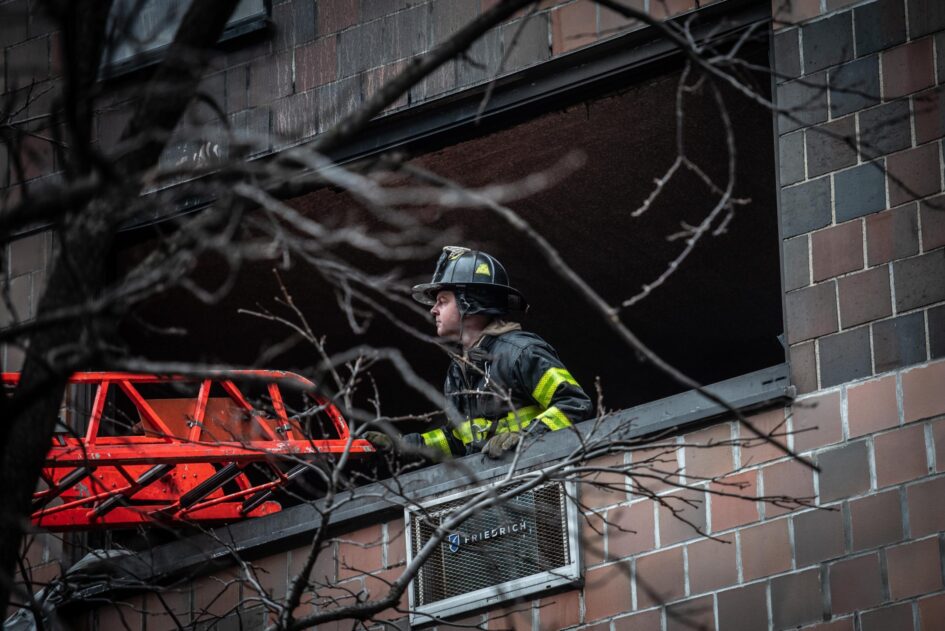 Only days after a fire in an overcrowded Philadelphia rowhouse claimed 12 lives, a building fire in the Bronx killed 17 people including eight children. The death toll was revised from the 19 deaths reported early yesterday, but still places the fire among the most deadly in America in the last 40 years, and the most deadly in New York City since 1990.

The blaze, reportedly started by a faulty space heater, quickly spread and poured smoke into adjacent apartments in the 19-floor building. The fire alarms in the building did go off, but tenants say that false fire alarms sound so often that it didn’t cause them concern.

The building, Twin Parks North West, was affordable housing constructed in the early 1970s, and had no external fire escapes or sprinklers. The building had been purchased in 2020 by real estate companies, LIHC Investment Group, Belveron Partners, and Camber Property Group, as part of a $170 million sale of affordable housing buildings. According to the New York Post, the building had more than two dozen code violations and complaints, despite receiving more than $25 million in state funding for repairs years earlier.

The spreading of smoke appears to have been due to an apartment door being left open as tenants fled the blaze. However, a law passed in 2018 after a similar Bronx tragedy required all apartment building doors leading to stairs and corridors to be self-closing by July 2021.

In the wake of the deadly fire, Adams emphasized an “educational campaign” to teach children to keep doors closed.

“Muscle memory is everything, and if we can drill that in we can save lives by closing the doors, not only in the city but across the entire globe, this painful moment can turn into a purposeful moment,” Adams said, apparently implying that the family fleeing their apartment for their lives was at fault for not remembering to close a door that should have shut automatically.

Adams’ campaign housing platform focused on up-zoning “wealthy areas” and repurposing office buildings made empty by pandemic work-from-home norms into housing, as well as overwhelmingly focusing on building “micro-apartments” and studio spaces, which overcrowd tenants by design and do nothing for families. To address the thousands of New Yorkers living in substandard housing, Adams’ only campaign plank was to sell off affordable housing buildings to private owners.

The Bronx fire, and the Philadelphia fire earlier this week, show in starkest terms the impact of substandard housing. Poorly-maintained and overcrowded buildings where tenants have to rely on space heaters to stay warm are disasters waiting to happen, and the for-profit housing industry clearly has no interest in cutting their own profits to ensure their buildings are safe. The winter of 2021-22, plagued by pandemic conditions but lacking federal renter protections and expanded unemployment that supported low-income tenants last winter, is racking up a nightmarish death toll.

There is no shortcut or “clever profitable solution” to addressing the severe dearth of genuinely affordable housing in cities across America. We must tax the richest corporations to rapidly expand permanently affordable, high-quality public housing. All existing public housing must be updated to meet safety standards, and renters’ rights laws must be expanded nationwide so that renters never have to pay rent if there are existing code violations in their buildings. Major renters rights victories in Seattle, like the winter eviction moratorium and Carl Haglund law, show the way forward to win such improvements elsewhere.

Developer sharks like Camber should at the very least pay immediate damages for all Twin Parks North West tenants. But even that won’t prevent them from cutting corners to cut costs because the price tag on emergency relief is nothing compared to the cost of providing a safe, permanently high quality, standard of living. These parasitic corporations should be brought into public ownership and tenants should have democratic oversight over their buildings and the costs associated with maintaining it.

However, the Bronx fire also demonstrates clearly the failure of local governments to enforce safety standards and renters’ rights laws. The basis for protecting tenants from slumlords who refuse to update their buildings, like the basis for winning the legal protections in the first place, is a militant housing movement fighting for a world where essentials like housing are not instruments of profit.