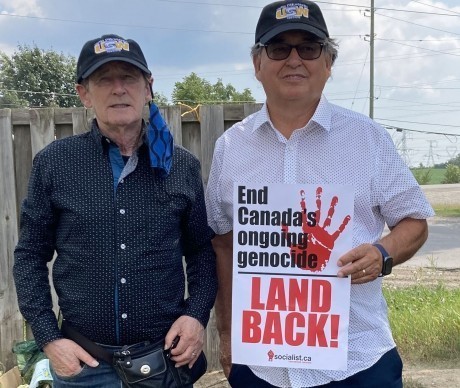 I recently drove with fellow Steelworkers to Land Back Lane in Caledonia. We were supporting Haudenosaunee Land Defenders fighting for their hereditary territory, and a song by Daniel Lanois written about 12 years ago came to mind. Its titled ‘Still Waters’ and speaks of Caledonia, the waters of the Grand River and the generations of Haudenausaunee who were members of Iron Workers union. They traveled from their lands to build the high bridges and tall buildings across Turtle Island:

An Algonquin Steelworker in the van spoke of this history and why we have to continue to build strong links between Indigenous struggles and the trade union movement. When we were last at the site a spokesperson for the land defenders, an Iron Worker told us, “Indigenous peoples and trade unionists have a lot in common. We both hate injunctions!” They’ve certainly proved it by courageously fighting for their rights, not being deterred by court rulings or police. Union leaders could learn from their example.

They’ve had a victory with the builders stopping the housing development on their territory, but the struggle isn’t over because the ownership of the land is still being challenged.

We were warmly greeted when we arrived along with members of the Coalition of Black Trade Unionists (CBTU) and the Ontario Federation of Labour (OFL). The CBTU ran a summer camp for Black youth and brought them to Land Back to make connections and build solidarity with young people their own age. It was a good day, continuing to forge links that will make a difference as we all continue to fight racism and the attacks of governments and corporations. I had earlier been given a patch by a land defender with the four colours of the medicine wheel and the slogan “United We Stand  Divided We Fall” and important message for today.

There has been growing actions among rank and file trade unionists defending Indigenous rights as we saw in the statement made by a large number of miners supporting the Nunavut hunters against Baffinland Iron Mines Corporation, the shutting down of Deltaport in Vancouver by the International Union of Longshore and Warehouse Workers in solidarity with the  Wet’suwet’en struggle, Indigenous blockades supported by labour activists etc.

We have also been seeing growing fight backs by workers over the past period. The dockers at the port of Montreal, members of the Canadian Union of Public Employees, went out in April in a strong show of strength, 2,500 USW miners at Valle Inco in Sudbury struck for months another 2 ,600 went out against ArcelorMittal in northern Quebec. In Toronto there have been a spate of smaller strikes at Tropicana Community Services, the Black Creek Community Health Centre, Wine Rack, Rexplas and NRT. They didn’t win everything they were after, but were way ahead of where they would have been without strong workplace actions. Confidence really grew among the members as they took matters into their own hands, rejected tentative agreements and set up picket lines.

I was actively involved in the last two, Rexplas and NRT. The first was a small manufacturing plant in my local of the United Steelworkers, the majority of workers were racialized women. They shocked their bosses by taking a strong stand, rejecting a number of offers, and linking their fight with the Indian farmers’ strike in which many had relatives. They stood strong and made real gains. NRT faced a lock out when Steelworkers, though worried the plant might close, courageously rejected sixty three concessions. The workplace was entirely shut down and solid secondary pickets at connected corporations put real pressure on the owners, forced them back to the table, and got a decent settlement.

There is a fighting mood right now in many sectors and solidarity is critical as people take action. Whether it be in defense of Indigenous rights, workers on the line, women fighting for reproductive justice, or standing up against anti Black racism or Islamophobia, this is the time to join together and fight back. No group should stand alone.