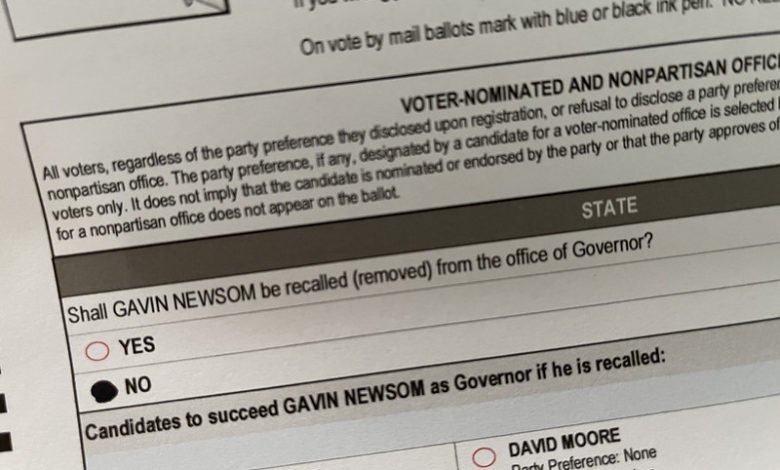 On Tuesday roughly 64% of voters chose to prevent the extreme right from seizing control of California. Democratic governor Gavin Newsom will retain his position as governor despite the millions of dollars spent by the Republican National Committee and corporate donors.The Democrats did not win the recall vote because of the strength of their program or confidence in Newsom as a governor but rather because the people rejected the message of Newsom’s likely replacement Larry Elder.

With somewhere in the neighborhood of a million votes yet  to be counted, the “no” vote stands at about 6.6 million, while the “yes” is a little under 3.8 million.

The California recall ballot asked voters two questions: (1) Should Gavin Newsom be removed from office? and, (2) If Gavin Newsom is removed, who should replace him as governor?

Elder, former radio host and Trump loyalist, had around 47.1% of the replacement vote, around 2.71 million. This result indicates that Trump style politics still remain popular within the Republican party’s base. Surging to the tops of the polls in the weeks ahead of the vote, Elder was viewed with total disgust by many outside of the Republican party. The list of Elder’s odious policy positions is long but includes calling for the elimination of corporate taxes, ending mask mandates and the minimum wage, and prosecution of women for having abortions.

The Democratic party’s strategy was to pose the question to voters: would you rather have Gavin Newsom or Larry Elder as governor? Newsom has a 55% approval rating in recent polls, more than 10 percentage points lower than the anti-recall vote. This signals that the people rejected the attempted electoral coup by the Republican party more than they endorsed Newsom.

The Republican party, which is developing more and more in an extreme right-wing direction, cannot win on the state-wide level in California and resorted to executing an undemocratic maneuver to attain power. Elder raised facetious questions about voter fraud days before the election but the landslide win by Newsom forced Elder to concede on election night itself. It is likely that Elder would have challenged the results if the election had been closer.

The California recall vote shows the importance of fighting for democratic rights while never ceasing to explain the limitations of those rights. These rights are incomplete in a capitalist society. It is only through a socialist revolution and construction of a socialist society that full democracy can be achieved.

The battle against the extreme right is not over. The recall had a chance to succeed because the Democratic party, a capitalist political party, is failing to address the urgent needs of the working class. So long as the Democratic party remains in power, the threat of another anti-democratic take over remains. The contradictions of the capitalist system cannot be solved by capitalist policies. The Newsoms of the world are not a permanent solution to the Elders of the world. The only solution to the far right is the organized power of the working class.