Can Union Caucuses Change the World? 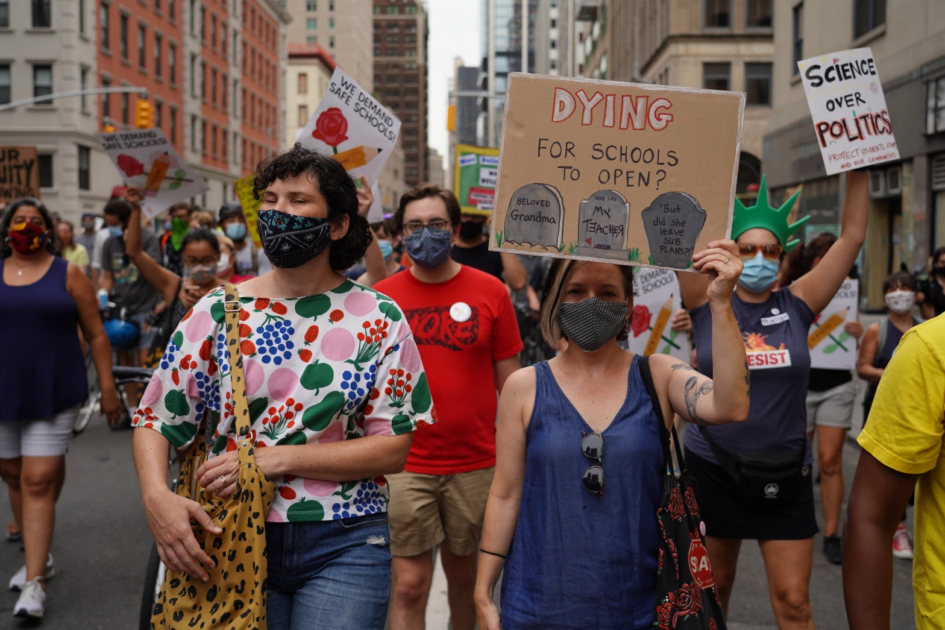 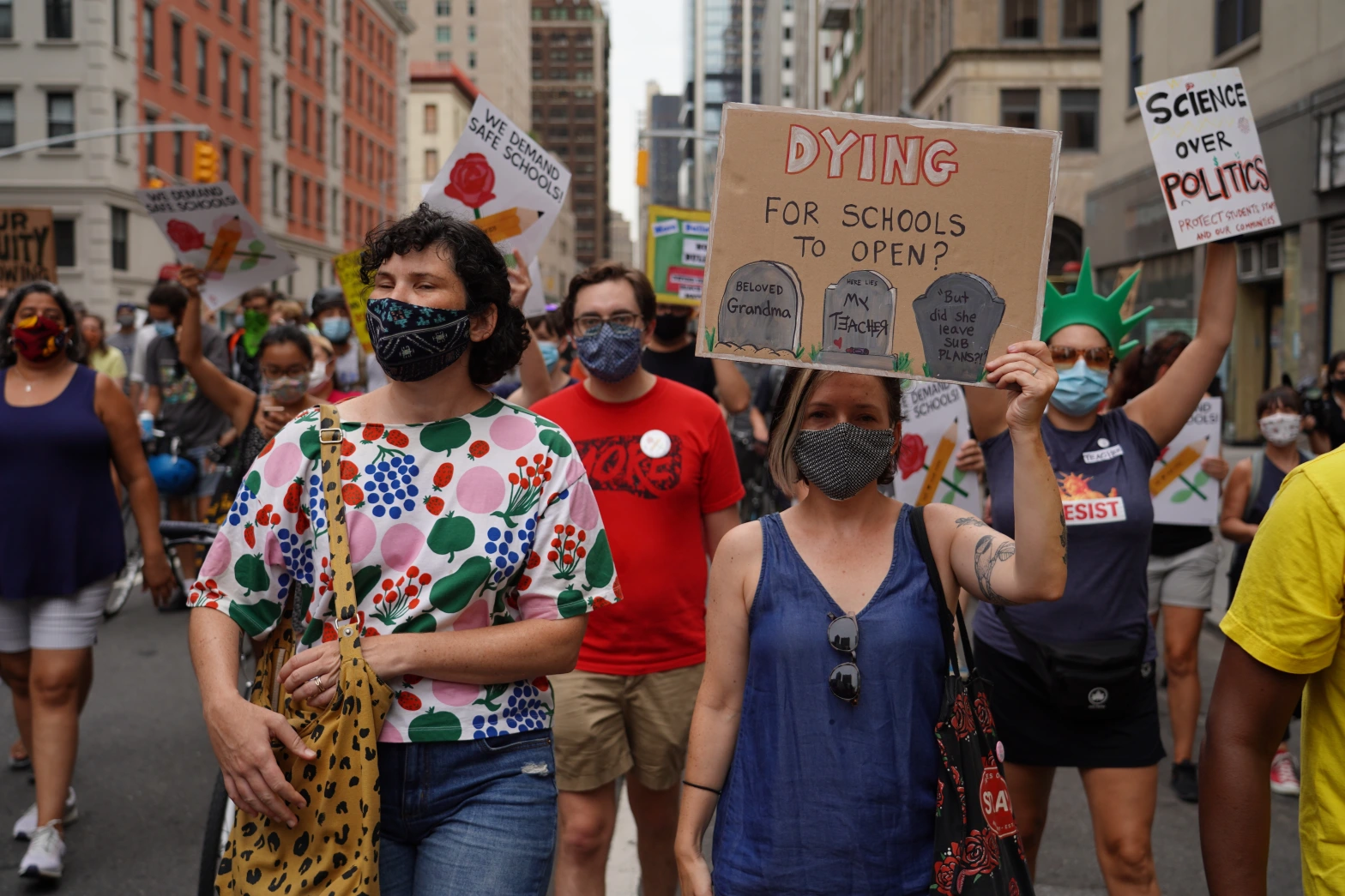 In March 2020, New York City became the U.S. epicenter of the emerging Covid-19 crisis. Yet neither city leaders, nor school district officials, nor teacher union leadership provided a meaningful response to a mounting public health crisis. Instead, the city’s fledgling social justice teachers’ union caucus, MORE, rose to the call. At the beginning of the pandemic, the caucus was in, arguably, its historically weakest position in years. By the end, it was stronger than ever before.  How did the caucus turn a crisis into an opportunity?

By clarifying crises as “turning points” rather than the external challenges themselves, we hope to contribute to a sociological reframing of the concept. Crises force political groups to contend over competing visions of the social world and possible paths forward. In this way, a crisis causes a clash of myths about the ruling order, as much as a breakdown of the ruling order. Crises force politicized groups to contest different visions. This understanding of crisis emphasizes actors’ agentic responses in the face of external challenges and, especially, the organizational forms, such as unions and parties, that can cohere and channel those responses and subsequent collective action.

After a Bronx teacher tested positive for Covid on March 12, the city did not close the school, despite state orders to do so. When teachers notified the United Federation of Teachers (UFT)  that they were being asked to work in dangerous conditions, UFT staff suggested calling the city help line, a suggestion teachers found utterly useless. Frustrated, several teachers at the Grace Dodge campus decided to take the situation into their own hands. They reached out to parents and community members, who were also concerned, and planned a sick-out for the next day.

Inspired by the Grace Dodge teachers, MORE leaders considered a similar plan for the entire district. On the weekend of March 13, 2020, the day after the Grace Dodge teachers’ sick-out, MORE organized a massive Zoom call to discuss a district-wide sick-out. Over 700 people registered for the call, by far the largest meeting of MORE’s seven-year history. “It was a wild and very, very tense 48 hours,” Kevin Prosen described. “I was just sitting on my couch the whole time, and we were organizing a massive job action. A historic one, frankly.” During that meeting, teachers made the decision to call in sick the following week. This was particularly significant because under New York state law, teachers are prohibited from striking, which made the strike-adjacent “sick out” job action risky. Not even 24 hours later, Mayor de Blasio announced he would close schools the next day.

The success of MORE’s sick-out threat signaled to educators across the city that MORE educators—not the UFT or the administration—were the school leaders most concerned with students and educators’ well-being. The crisis of hegemony had begun: the existing union leadership failed to provide a meaningful response to life-threatening challenge, causing many educators to question their leadership. MORE had filled the gap. As Prosen explained, “The real effective thing was that put [MORE’s] name on the map as people with enough power to close school systems.” As both the UFT and the school administration failed to provide legitimate leadership, MORE was positioned and ready to assume leadership.

As many schools were facing profound loss and death, MORE provided an organizing home that neither the UFT leadership, which was focused on negotiations with government officials, nor educators’ school communities, many of which were caught in grief, could offer.  Shoshana Brown, a school social worker who joined more in March 2020, reflected on more’s membership growth: “A lot of folks joined MORE because they were scared their union and their chapter leader were not doing the things that were needed to protect them. They felt like what they heard from MORE felt life-affirming.” In the face of great tragedy and uncertainty, MORE gave people a sense of agency to address the crises con-fronting their communities.

MORE’s willingness to take direct action provided a flagpole to summon similarly-concerned educators. As Kit Wainer described, “We were putting out the idea of ‘let’s do a city-wide walk out’ and then de Blasio closed the schools. So we became associated with that. People who were interested in that kind of direct-action approach came around to us.” Not only did this approach recruit educators seeking action, it also distinguished more’s response from the UFT’s bureaucratic strategies. “[MORE] wasn’t a whole lot of an audience for, ‘Yeah, we should fight this but let’s stay within legalistic means,’ because if you believe that then you might as well just support the union leadership,” Wainer explained. Unlike UFT, MORE was committed to leading direct action organizing in response to covid, not just negotiating with city’s leaders. This approach was appealing: MORE’s membership grew from about 100 members in March 2020 to approximately 750 members in March 2021, a 650% increase. The caucus found itself with its largest membership in its history.

Perhaps most importantly, MORE’s membership spike and legitimized leadership enabled the caucus to develop new strategy to advance its vision. As MORE leader Joel Solow described, “[Covid] made things possible that weren’t possible before, because now we just have more capacity. We have a lot more activists, and so we have a lot more people holding down and organizing district com- mittees… We have the capacity to organize all those committees, and people can participate in that and not burn out.” With more people in the organization, the caucus had more capacity for strategy. Larger membership, Prosen explains, “means now we can have a strategy. Because before we were too small to really need a strategy, right? A strategy to do what? To get 20 new members? Strategy means you’re talking about power and how you’re going to move it.” MORE’s 650% increase in membership and its accompanying political legitimacy enabled the caucus to consider how to exercise power, not just petition for it.

How was a small group of teachers able to not only change the direction of a notoriously bureaucratic union, but also one of the country’s largest school districts? And how did the caucus emerge stronger as a result? The caucus worked to generate and shape existing ideas into political demands through the work of political articulation, that is, developing and circulating myths that explain the social world.

Union caucuses, we contend, offer a mechanism for political articulation. Caucuses can bring together constituencies and issues not often represented by traditional union programs, such as environmental concerns, anti-war agendas, or representation by people of color or women. Like political parties, social justice caucuses structure and politicize existing social cleavages that union leaders may have dismissed, consciously or not. Caucuses can connect disparate populations (i.e., union members with external communities) and expand the set of ideas typically overlooked by a union’s narrow concerns.

The story of MORE’s covid response also illustrates that crises and the political upheaval they provoke are hardly predetermined. While right-wing groups have been famously known to take advantage of crises, there are also possibilities for leftist organizations. We consider crises as externally-imposed, challenging events that can trigger a realignment of the hegemonic order depending on how political organizations struggle to interpret the initial incident. MORE used the crisis of Covid to expose the limitations of existing school leadership, and to articulate their own vision in ways that fellow educators found resonant and necessary—such as a need to forcefully address harmful working and learning conditions and building alliances with teachers and students to address social and racial justice.

In other words, to do the work of political articulation we argue that it is necessary to have internal structure, a relatively united network of activists dedicated to a common goal, and moral leadership or authority on pressing social and political issues. Although MORE was founded in 2012, it took the caucus almost eight years to develop the internal unity around the social issues that would become important during the covid crisis. MORE’s already-existing organizing capacities enabled the caucus not only to survive a moment of crisis, but to use a crisis to strengthen its mission. Although developing these capacities had been a long and unsteady process, the educators’ enduring commitment to rank-and-file, social justice unionism enabled them to act as powerful political articulators in a critical moment.

Eleni Schirmer is a research associate with the Future of Finance Initiative at UCLA’s Luskin Institute on Inequality and Democracy.

Rebecca Tarlau is an Associate Professor of Education and Labor and Employment Relations and is affiliated with the Center for Global Workers’ Rights at Penn State University.

Montreal Marxist School 2022: Over 1,000 people thirsty for ideas to change the world

‘Peace to the peoples! Workers of the world unite!’Soviet Union, 1961Via Communist Posters