Can we avert climate chaos and meet people’s needs? – explainer 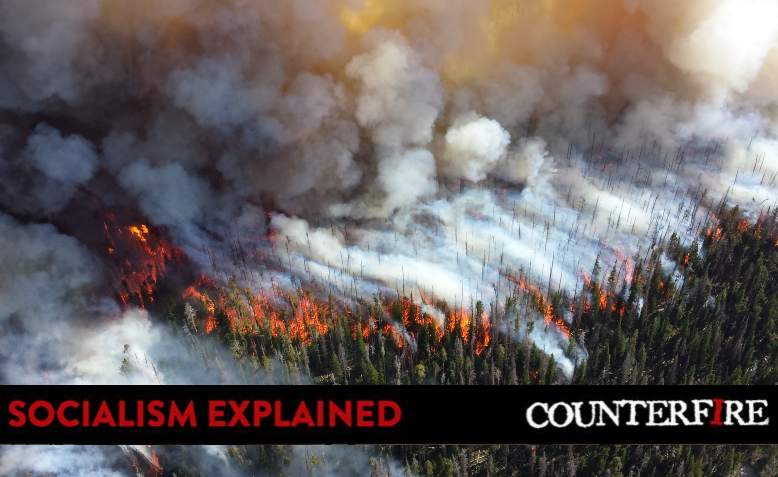 As COP26 approaches, Feyzi Ismail explains why it looks unlikely to deliver and outlines a socialist approach to averting climate catastrophe.

The capitalist system is driving us towards climate chaos and at the same time failing to meet people’s needs. This is because, in the pursuit of endless economic growth, it is based on blind competition between corporations and countries, and maximising profits by pushing down wages.

Capitalist expansion requires overconsumption in order to maximise profits, which makes consumerism, planned obsolescence, and unsustainable business models unavoidable. This occurs alongside underconsumption; an inability for vast swathes of the global population to meet even basic needs.

Proposed solutions to these problems vary, from techno-utopianism to ethical consumerism, but both are limited unless they challenge the fundamental sources of the crisis: capitalist production and its exploitation of both labour and nature. Rather, as humanity stands perilously close to the edge of climate and ecological breakdown, what is urgently needed is a move towards more conscious planning.

Techno-utopian arguments focus on the power of technology to meet people’s needs. At the extreme end, which includes versions of eco-modernism, the argument goes that people can continue to lead fossil-fuel-driven and hyper-consumerist lifestyles, while technology – such as various forms of geoengineering – will deal with the consequences. These technologies may very well be necessary in the future, given that we are already experiencing extreme climate events and are decades behind schedule in addressing the emergency. However, they are uncharted and evade the core of problem, which is the need to immediately halt investment in fossil fuels and switch to alternative energy sources.

Relying on technofixes ignores the fact that technologies are not neutral but arise out of unequal social relations, and are shaped by those who control them. This reliance also fails to challenge the market logic of a production system that is built on fossil-fuel extraction, deforestation, agribusiness and other drivers of ecological crisis; practices which are the most profitable for companies.

A left-wing version of techno-utopianism argues that technological advances must be embraced because they mean abundant supply for all, and that what is needed is a social-democratic government that can distribute these resources in a more equitable manner. Such a government is certainly a starting point, and no radical Green New Deal will be put in place without one. What is discounted, however, is the fact that neither technology nor a social democratic government will solve the underlying problem. If the capitalist system needs constant expansion in order for profits to be made – with a focus on GDP growth, the seeking out of new markets and so on – according to competitive principles, then this requires the relentless exploitation of people and of natural resources. Often this includes imperialist war.

For people’s needs to be genuinely met, popular democratic control over technology is essential, and that will require an overturning of capitalist social relations by working people.

In contrast, another set of arguments focus on ethical consumerism, which amounts to changing people’s needs in the first place: people should consume less, become vegans, stop flying and watch their carbon footprints. Some people are already changing their lifestyles, but individual consumer choices designed to absorb the problems of capitalist production could never amount to the scale of change required. It also assumes that demand drives supply – that consumer choices determine what is produced – rather than the other way around, which is that companies produce what is profitable and ultimately shape consumption. Moreover, ethical consumerism allows the corporations, whose production processes are the source of the vast majority of emissions, to be let off the hook entirely.

Concentrating efforts on either of these approaches neglects the causes of the crisis. The first defends overconsumption while the second places the burden of responsibility on individual action. In the process, both underestimate the scale of the crisis, absolve corporations and governments of culpability, including obligations to address the crisis, and allow the market to dictate the solutions. And if the sole focus of engaging the market in climate solutions is to consider the costs of addressing the crisis, weighed against costs to the global economy, this fails to grasp the costs of potential societal and civilisational breakdown.

Far from counterposing the tasks of averting climate chaos and meeting people’s needs, it is vital that they are addressed simultaneously. A radical Green New Deal that prioritises and recognises the value of jobs in welfare – health, education and other caring industries – repurposes polluting industries into sites of clean energy production, and even carbon capture and storage, for example, while establishing the foundations for democratic control of production, is an important start. It would begin the process of challenging the ultimate driver of the climate and ecological emergency – a system of production driven by a capitalist class that prioritises profit above all else.

How can a radical Green New Deal be achieved, even under a right-wing government? We need a mass movement that can fight for at least elements of a Green New Deal in the immediate term. This means building movements against the climate crisis but also, and perhaps more importantly, against imperialist war, austerity, and exploitative working conditions: movements that can help bring down right-wing governments. No progressive government that replaces the right will be kept in place without a mass movement. Whichever government is in power, organising towards these ends needs to happen in the here and now.