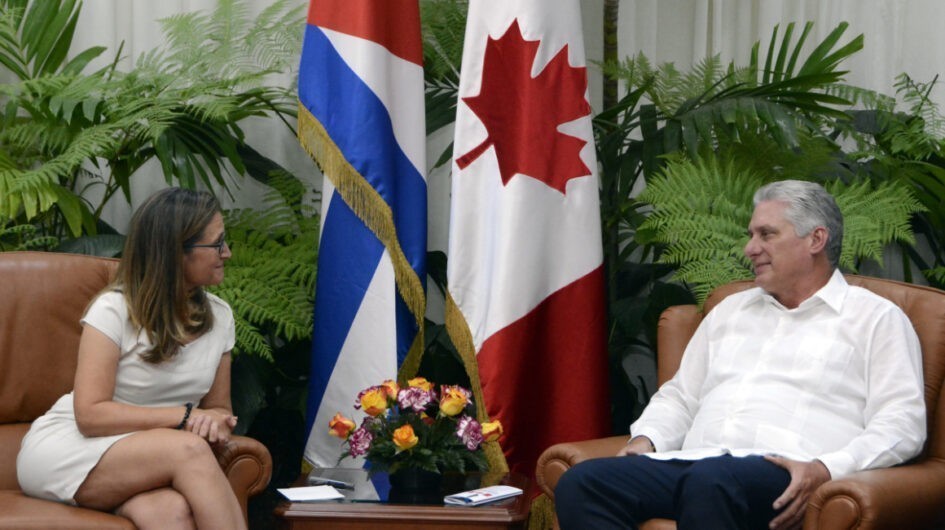 Longtime peace and solidarity activists Miguel Figueroa and Larry Wasslen interviewed Cuban Ambassador to Canada, Josefina Vidal, to discuss the current context for the Cuban Revolution. People’s Voice is publishing this interview in three parts. Below is the second installment looking at developments in Canada-Cuba relations and the solidarity movement.

Larry Wasslen: Given the rightward lurch of the Trudeau government’s foreign policy in recent years vis-a-vis China, Venezuela, NATO and military spending, do you have concerns about this trajectory in the short or medium term, particularly in terms of Canada’s relations with Cuba?

Josefina Vidal: I would say that relations between Cuba and Canada in general are positive. Last year, a few days before COVID-19 was declared a pandemic, we had the opportunity to celebrate 75 years of uninterrupted diplomatic relations between Canada and Cuba, and for that occasion we had a visit of the First Deputy Minister of Foreign Affairs of Cuba, Mr. Marcelino Medina. He also presided over the Cuban delegation for the annual political consultations that we have been able to establish on a regular basis with Canada since the beginning of the Trudeau government at the end of 2015. This is a very positive development of Cuba-Canada relations, to have the possibility every year on a regular basis to compare notes: what we have done, what else we could do, what are the difficulties that exist in the relations, what are the possible solutions.

Since my arrival in Canada in 2018, there have been active visits – or conversations by phone in the conditions of the pandemic – between very high-level officials of both countries. We had the visit of four Cuban ministers to Canada: Foreign Affairs, Foreign Trade, Tourism, and Science, Technology and Environment. The [Canadian] Minister of Foreign Affairs visited Cuba and during the pandemic there have been several phone conversations between the foreign ministers and also between Prime Minister Trudeau and the President of Cuba, Miguel Diaz-Canel. So, the communication is dynamic, ongoing.

When we started facing the double-effect of the US blockade and the pandemic, we approached the Canadian government to expose to them the challenges that we were facing in Cuba. As a result of that, last year, Canada decided to grant Cuba $300,000 through the Pan-American Health Organization for Cuba to buy much-needed material that we needed in order to confront the pandemic. More recently, Canada decided to grant Cuba a credit for $15 million to buy medicines and medical supplies in Canada. This is very, very important because there are not many countries in the world which are ready to grant credits to Cuba.

We have permanent communication, we exchange ideas, we do not always agree, but the dialogue is very respectful and very useful. We also share with Canada examples of the extraterritorial implementation of the US blockade in the Canadian territory. There are legislations and regulations in Canada to prevent Canadian companies from following the US blockade rules, but that happens every year. Just today, I shared with Global Affairs a list of five examples since the end of 2019 of implementation of the US blockade in Canada which has affected Canadian citizens, companies and also the Cuban embassy and our consular offices in Montreal and Toronto.

JV: In terms of the US, nothing has changed – you are right. In spite of the fact that Mr. Biden promised during his presidential campaign that he would eliminate some of the measures adopted by Trump, nothing has happened. At the end of the Trump administration, we could count 243 unilateral coercive measures against Cuba, and I can tell you that none of these 243 measures, Trump measures, have been suspended by Biden. From January 22, the fraudulent designation of Cuba as a “state sponsor of terrorism” entered into force. After that date, things have aggravated. We have seen foreign banks closing the accounts of Cuban entities including Cuban embassies. We have seen suppliers suspending their contracts with Cuban counterparts. We have seen even an impact of this situation on the ability for Cuba to buy supplies, materials which [are] needed for the development and production of the Cuban vaccines against COVID-19.

We see from time to time letters from Members of the US Congress, from NGOs, from different organizations in the US, religious groups, asking Biden to change policy towards Cuba. They have said that they are reviewing the policy, but we don’t know anything about when this process will end, what will be the scope of the review. And at the end, things are the same and that’s the reason why, even if they change something, we will go next month to the UN General Assembly to present once again the Cuban resolution against the US blockade and we are almost totally sure that we will have the support of the international community.

Miguel Figueroa: What forms of solidarity does Cuba need most in the present circumstances? In terms of material aid, the CNC and the other Canadian friends of Cuba have already undertaken important campaigns to provide medical supplies such as syringes to Cuba, but we realize that the difficulties and the shortages cut across many sectors of the economy and of social life in Cuba. Should the friendship and solidarity movement consider widening its focus on material assistance beyond medical aid and if so, which sectors are in most urgent need?

JV: You know, normally, Cuba doesn’t ask “give me this, give me that.” But at the same time, our gratitude doesn’t have any limits when friends of Cuba approach us and tell us with open arms and with their hearts, selflessly, “we want to help.” And this is what happened at the beginning of this year. By its own initiative, the Canadian Network on Cuba last year decided to launch a campaign to raise funds to help Cuba cope with COVID-19, but also to help the medical brigades of Cuban doctors, nurses and health professionals that were working in many countries of the world. So far, there have been 57 Henry Reeve Brigades in 41 countries.

CNC launched a campaign to support Cuba and to support the Cuban medical brigades and those funds were transferred to Cuba and to the Minister of Public Health in Cuba. At the beginning of this year, CNC approached us and told us that they wanted to do more – to provide some more specific material aid to Cuba. I wrote to Cuba and asked them to provide me a list of things that were needed at this very moment. The list they sent was totally made up of medical supplies.

People in Cuba are very grateful for the Canadian Network on Cuba to decide to put syringes and needles as a priority. I was in Cuba in many meetings and I [encountered] very high-level government officials – even the President and Prime Minister. They heard the news because we made it public through social media that the Canadian Network on Cuba had already contracted almost two million syringes and needles. And they were all stopping me in the corridor: “Josefina, this is wonderful news; Josefina, we have true friends in Canada! We do not know how to say thank you [to] them because this will be a very important contribution for the vaccination campaign in Cuba.” So, you can be proud, and we are proud for having so many noble friends here in Canada.

M: Yes, the response has been overwhelming, actually. We had set certain targets as you know and already it’s beyond that. And interestingly, it’s coming not just from individuals, people who are close personal friends of Cuba, but also from unions, from people’s organizations. I understand that the US-Cuba Normalization Campaign has also decided to take up this campaign for syringes.

JV: I know, and they are joining forces with the CNC. And they told me that the goal is to send many million syringes [laughs]. That will be huge! I know that will be headlines in Cuba – all over Cuba!

See also: Part One – Standing tall against the “Double Pandemic” of COVID and the blockade