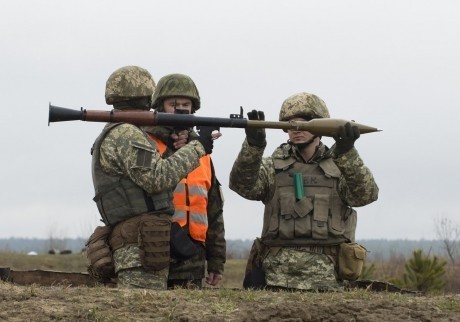 Canada’s role in Ukraine is intensifying the possibility of war. The Liberal government is sending more military equipment to the region, training fascists in the Ukrainian military and trying to exploit the situation, at least partly, so Canadian fossil fuel corporations can replace Russia as a supplier of oil and natural gas to Western Europe.

Beyond the financial help, Canada has sent special forces to shore up the Ukrainian military and to train Ukrainian troops. This is in addition to previous Canadian forces deployments to Ukraine, Latvia and air and navy deployments in the Black Sea region. This is all part of what the government of Canada calls ‘operation reassurance’ designed as a show of force to Russia.

Although the mainstream media has labeled these deployments a necessity against Russian ‘aggression’, there is no reason for the Trudeau government to be adding fuel to the fire.

The Russian state certainly has its own imperial aims but, to be clear, Russian troops are building up within Russia’s borders. Canadian troops have flown more than 7000 kilometres away to amass within countries bordering Russia.

We needn’t have any illusions in the benevolence of Russian intentions to know that Canada and its NATO partners are clearly aggressive.

The possibility of conflict – even an accidental confrontation – is increased with each deployment. There was a great deal of sable rattling in Canada when CF-188 warplanes were scrambled from a base in Romania to intercept Russian attack aircraft over the Black Sea last fall. These types of confrontations could spiral out of control very easily.

Since the fall of the USSR, the goal of NATO planners is to surround Russia and to ensure that it can never again rival the US as the dominant power globally. Far from being the ‘end of history’ the collapse of the Eastern bloc was seen as an opportunity to pillage former lands of the USSR by western corporations.

That project is the fountainhead of the conflict we see today. Ukraine is a key piece in NATO’s imperialist rivalry with Russia.

For Canadian capitalists, the conflict offers potentially new avenues for profit. The Canadian Energy Centre (CEC), set up by Jason Kenney argues that Canada needs to do more to open up the lucrative Western European market for oil and gas to Canadian fossil fuel corporations.

For its part, Russia wants to expand the territory under its control and is engaged in other smaller regional imperial interventions from the Crimea to Kazakhstan.

Those competing aims are coming to a head in Ukraine. Neither side has benevolent intentions and the people of Ukraine will continue to suffer.

Any war launched by Russia or NATO would be a disaster for working people in Ukraine and throughout the region.

Canada must withdraw its troops and equipment from Ukraine. They are not only adding to the tension in the region, and they are, as a number of recent reports have detailed, training fascist elements within the Ukrainian military which will further increase conflict in the area.

Ukraine’s neo-Nazi organizations encourage supporters to join the military, and openly boastabout receiving training from NATO forces in general, and Canada in particular.

A report from the Institute for European, Russian and Eurasian Studies at George Washington University details a powerful fascist movement with tentacles in government and the military. It is “a large far-right organization with thousands of members that stretches from a highly capable and politicized Azov Regiment of Ukraine’s National Guard to a far-right political party National Corp.”

The report’s author, investigative journalist Oleksiy Kuzmenko notes that these forces are still a minority in Ukraine, but are growing, in part because the Ukraine government and its NATO allies turn blind eye to fascist recruiting at the military training academy.

Training fascists and deploying troops and military equipment will not de-escalate the current situation. It only adds fuel to an already dangerous and growing fire.

As the Socialist Tendency in Russia explained, “The main role of left movements inside imperialist states is to oppose imperialism at home, where the main enemy always is. But both imperialisms, from “East” and “West,” are both reactionary, regardless of which has more or less power at any given time.”

We need to oppose Canada’s role in fuelling this war drive.

The Maidan massacre in Ukraine: revelations from trials and investigations

How Do We Stop the Neocons From Starting Another Disaster in Ukraine?