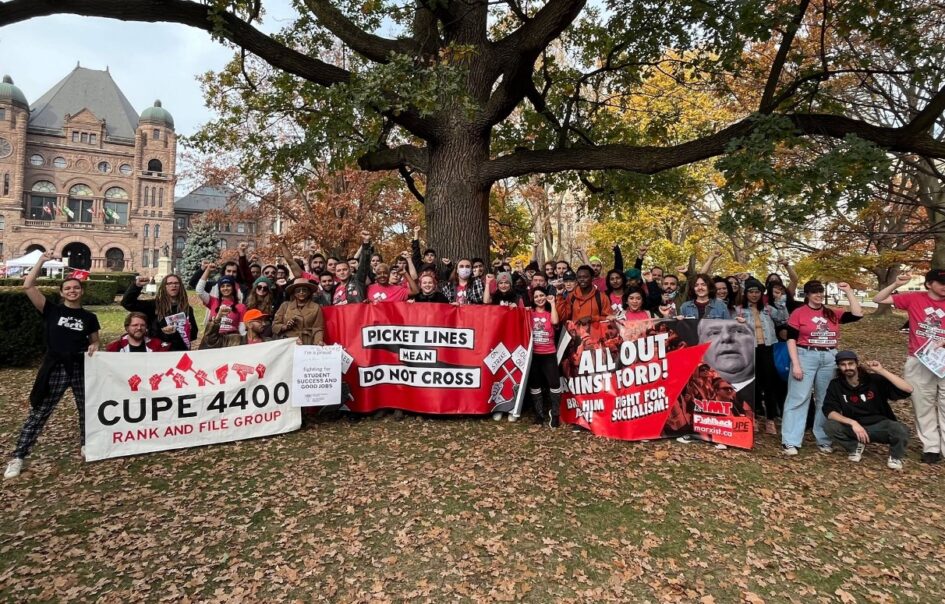 As the long-awaited results of the ratification vote for the contract brought forward by the Ontario School Board Council of Unions (OSBCU) were announced, there was a wave of anger over the yes vote. Workers said they were “bullied”, “this is bull&!”, “you built us up and let us down”, “many will be leaving the position because they can’t afford to work”, “screwed for another 4yrs!!!”, “we were so united and now divided… this contract does absolutely nothing to help students or ease our difficulties in our classrooms”, “this whole thing stinks”, “this is awful! This is not the outcome we needed”. There were literally hundreds of similar comments. How did we get from a historic victory of workers against back-to-work legislation and the notwithstanding clause, to this disappointing final contract?

After an unusually long two-week voting period, 73 per cent voted yes to a tentative agreement that contained a $1 per-hour wage increase. This compares poorly with the $3.25 that the union was asking for to keep up with inflation and recover from past wage erosion. There was a 76 per cent turnout on this ratification vote, down from the 83 per cent turnout for the union’s overwhelming strike vote. Only three weeks ago CUPE negotiator Laura Walton was calling anything less than a $3.25 raise unacceptable and said she was prepared to go on strike to keep up with inflation. Walton praised the workers for their strength and unity in taking illegal strike action to defeat back-to-work legislation and the notwithstanding clause. Now we have this climbdown.

The inadequate final contract stands out in stark contrast with the amazing victory against the Ford regime just a few weeks ago. 55,000 Ontario school board workers organised with the Canadian Union of Public Employees (CUPE) made history by going on two days of illegal strike and threatening a general strike. This amazing show of worker power and solidarity forced the government into an unprecedented climbdown to repeal the legislation. But after this show of strength, the union leadership conducted a 180 degree turn around into full demobilisation.

On Nov. 16, CUPE issued a five-day strike notice against the government. After the defeat of back-to-work, management upped its offer from a raise of about 2.5 per cent to 3.5 per cent per year. The strike notice was a clear statement that the offer was insufficient, but it was brought to the membership anyways. However, in hindsight we can see that what the union leadership was doing is something that has become known as the “CUPE-bluff”. 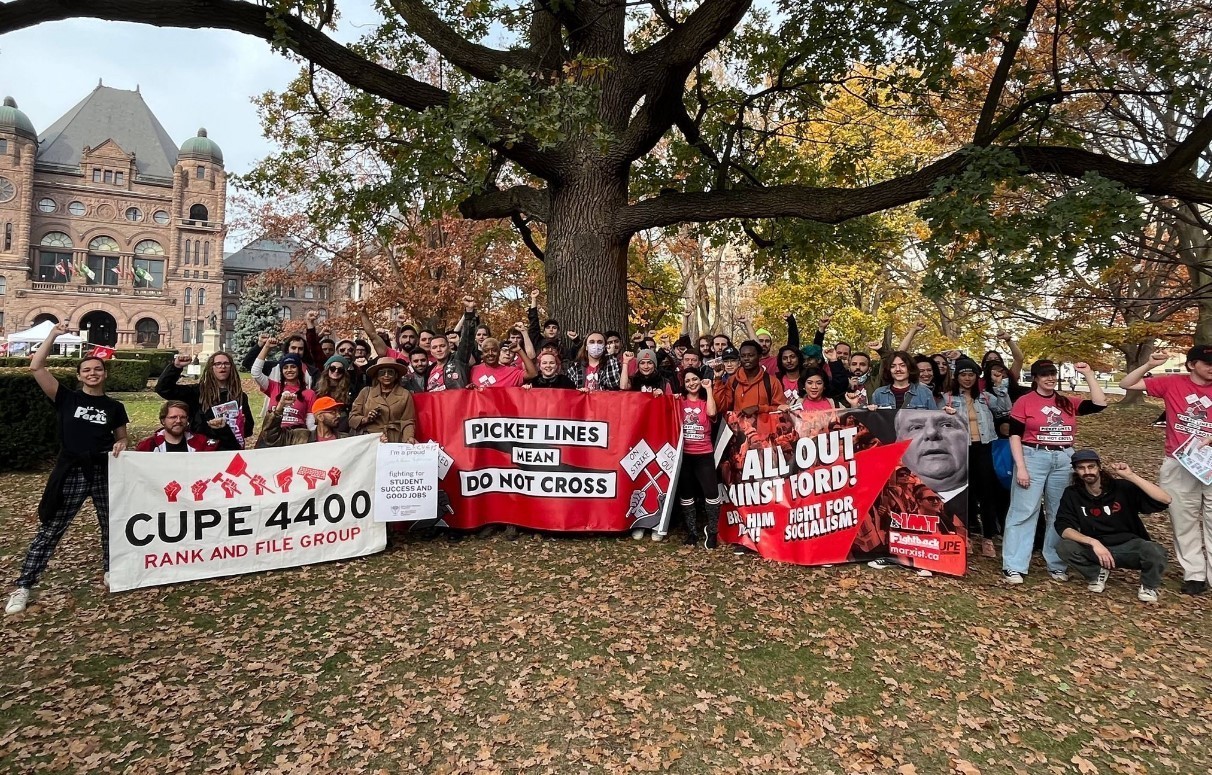 CUPE workers won an amazing victory a few weeks ago, by going on two days of illegal strike and threatening a general strike / Image: Fightback

CUPE is typically seen as being on the left of the Canadian labour movement. While other unions call for cooperation between labour and management, CUPE representatives often do a good job denouncing the bosses. Sometimes they even go so far as to denounce the capitalist system itself. However, the strident rhetoric isn’t often backed up with strident action. After politically attacking management, mobilising the membership, taking a healthy strike vote, and then setting a strike deadline, there is a recurring pattern of CUPE locals signing a deal at five minutes to midnight before the deadline. Sometimes this bluff works and management gives concessions, and sometimes it doesn’t and management doesn’t move an inch, but what is apparent is that the leadership never had any intention of striking under any conditions. Management has learned this and so the CUPE bluff is now totally ineffectual. This is exactly what happened in the school board negotiations and explains why CUPE leaders were promoting a bad deal that they were denouncing and threatening a strike over just five days previous.

You don’t have to be very intelligent to understand that a threat is pointless if you are not prepared to follow through with it.

After calling off the strike, OSBCU president Laura Walton put out an emotional live video saying the deal wasn’t very good but she had no choice but to recommend it. The comments on this video were astounding, with hundreds and hundreds of “vote no” statements. There was a widely circulated rumour that Walton wanted a no vote. This video was so damaging to the yes campaign for the terrible deal that the top bureaucracy of the union deleted it off the internet. There was also a CUPE Cast episode recorded two days before the bad deal that was briefly posted before being removed. This podcast episode didn’t say anything about whether the deal was good or bad, but it did contain much praise for the strength and power of CUPE workers and therefore could not be allowed to go out. The bureaucratic mission was now to convince workers they were weak and powerless and had to vote yes or there would be a disaster.

Laura Walton was seen as unreliable in promoting this sub-inflation contract, and so the bureaucracy wheeled out the big guns of Mark Hancock, and Candice Rennick, CUPE National’s President and Secretary-Treasurer. They said the deal that makes workers poorer was a “breakthrough wage settlement” and presented a defeat as a victory.

Subsequently at Zoom-hosted online union meetings the leadership wheeled out lawyers to scare and bully workers into voting yes. They mobilised a series of bad-faith and scaremongering arguments to do everything to dampen workers’ desire to fight. They said that the government had given all they could, despite the fact that this was what was said when the government was offering 2.5 per cent. They said that a $1 raise was great and used all sorts of creative math to make it seem better, despite everyone knowing that anything less than $3.25 is a pay cut. They said if workers strike they could be legislated back to work, despite the fact that these very same workers had just defeated back to work legislation! They even said that if there was arbitration the workers could get less than $1, a total paranoid political fantasy! They even mobilised the spectre of the coming Christmas season as a reason to call off the struggle. While this was happening Walton was seen to be in tears.

But the ghosts of Christmas could not be allowed to be challenged in their crusade for a yes vote. No worker was allowed to speak to their fellow union members in these meetings to answer these demobilising and demoralising arguments. There was absolutely zero opportunity for a democratic debate where those who believed  that the workers were strong enough to go on strike could have the floor to convince their co-workers. It was a one-sided propaganda barrage by the leadership against the rank-and-file. Taken consistently, all the arguments of the bureaucracy were not just in favour of voting yes, but arguments against ever going on strike or even taking a strike vote. In September and October such arguments were only spoken by the anti-union right wing, but now they were mobilised in full force by the leadership.

Even the extended two-week ratification vote period was another maneuver to suppress the no vote. This gave the bureaucracy extra time to mobilise demoralised workers who would likely abstain, while also pushing everything later in the year when things are colder and the school year is almost over. With all these tricks it is amazing that 11,229 workers courageously voted no and held strong in the face of hellbent demobilisation.

One can guarantee that with a different leadership there would have been a very different result. This was not a situation where the leadership stood back and passively polled the opinion of workers. This was a political war where one side had all the guns. Many workers who voted yes would have thought that they do not like the deal, but what choice was there when their own leaders said there was no hope to win. It is like an army going into battle with generals who are already preparing to surrender. In that situation your front-line soldier would be more likely to wave the white flag than be led to defeat by officers who have made it clear that they would betray the fight. 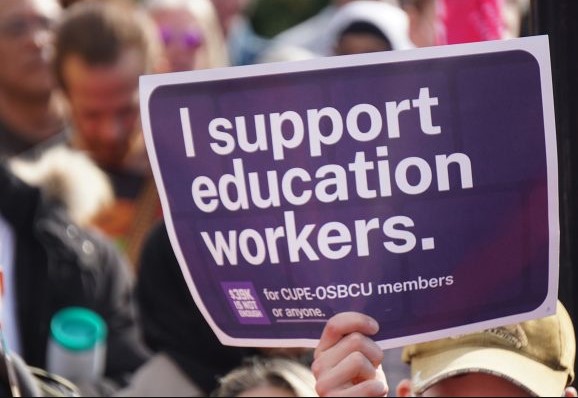 The workers were incredibly popular with poll after poll saying the workers deserved more / Image: CUPE

The tragedy is that this fight was totally winnable. Even right-wing newspapers had said that the government was weakened by the defeat of the notwithstanding legislation. The workers were incredibly popular with poll after poll saying the workers deserved more. What was needed was a desire and willingness to act and go on strike. What was needed was a political appeal to the general public to say that all workers deserve a raise that keeps up with inflation. That a victory for the education workers is a victory for all workers against this government that only helps the capitalist profiteers. Those that say this is impossible are essentially saying that workers can never fight and win, because there is never a situation that looks better than the current balance of forces. We need to fight for a union leadership that demands that workers do not go backwards and are willing to strike to achieve this.

Inside CUPE is a network of rank-and-file workers who were arguing for a no vote. Unfortunately this network was not yet strong enough or organised enough to win the day. But if the hundreds of militant workers who argued online for a no could have been united in a rank-and-file organisation, they could have won over more than the 11,000 who were prepared to defy the demobilising leadership. This is the next struggle for the movement: to unite the elements who genuinely understand and believe that when workers are united, they will never be defeated.

The education workers’ contract has unfortunately been ratified, but the struggle is far from over. Inflation is not going anywhere and more and more unions are negotiating contracts. Schools may soon face new strikes when the teachers’ negotiations reach an impasse. Workers have learned that back-to-work legislation can be defeated by mass defiance, and this weakens the government. Workers are also learning about the need for democratic and militant leadership of the unions, controlled by the rank and file that is able to speak at mass meetings.

At the end of the day each union struggle is a struggle against the crisis of the capitalist system. It is capitalism that causes inflation, and capitalism that cannot afford good jobs and wages. The more the workers struggle, the more we build power to change society. We need to use this power to build organisations committed to removing capitalism, to build a socialist society with good wages and jobs for all.

Reflections on the current school board wars

Workers to Postal Board of Governors: Dump DeJoy

Back to school or school of war?: Ontario’s Bill 28 and the Power in a Union — Cam Scott