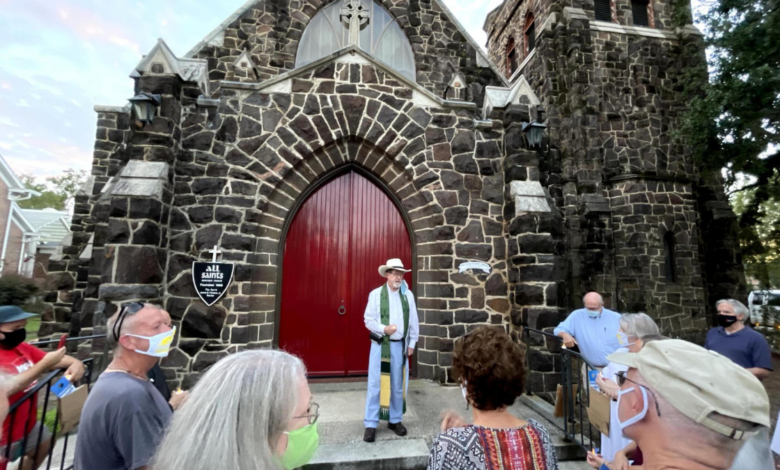 On September 20th, community members in Mobile, Alabama, held a candlelight vigil in front of the All Saints Episcopal Church to demand an expansion to Medicaid. This vigil was part of the Nonviolent Medicaid Army called for a National Week of Action from September 13-20, and was organized by the NVMA and the Poor People’s Campaign, and was endorsed by the Party for Socialism and Liberation’s Central Gulf Coast branch.

Dozens of people gathered at the vigil to remember those who have died from a lack of healthcare during the COVID-19 pandemic. Speakers and attendees called for an expansion to Medicaid — a desperately needed measure to prevent more needless death amidst a global pandemic.

Getting to the root of the health crisis, Rev. Algood went on, saying, “a system that creates beggars must be eliminated.” — a sentiment that was enthusiastically shared by the crowd.

After speeches demanding healthcare justice — and ultimately a whole new system — attendees of the vigil then called out the names of loved ones who had passed from COVID-19 or lack of healthcare. Attendees and organizers then strategized next steps to keep the momentum up.

The Healthcare reality in Alabama

In Alabama alone, there are 340,000 people currently going without Medicaid coverage simply because the state has not expanded Medicaid as provided for under the Affordable Care Act. On the state of healthcare in Alabama, Rev. Algood said to Liberation, “the immediate thing [that we want] is the expansion of Medicaid to cover 350,000 people in Alabama who don’t have any insurance at this time and have fallen through the cracks. People are literally dying because they don’t have access to quality medical care.”

Rev. Algood added, “There are something like 7 rural hospitals that have had to shut down in Alabama, forcing people to drive 250 miles to a hospital.” Since 2010, in addition to the seven hospitals have closed in Alabama, 17 rural hospitals were designated as “vulnerable”. But researchers found that hospitals in states that expanded Medicare were 62% less likely to close — showing that the call for the expansion of Medicaid is nothing short of an urgent necessity.

On the lack of access to healthcare, Dr. Raul Richardson, organizer with the Poor People’s Campaign, said to Liberation, “Many [people who have died from COVID-19] have not had access — in the middle of a pandemic — to the most important need when you’re not feeling well: Quality healthcare.” Dr. Richardson added, “We’ve got all kinds of doctors offices and clinics [in Mobile, Alabama], but then in other communities — whether it’s Cullman, Muscle Shoals, or Thomasville — those individuals don’t have the same access as we have, and I am concerned, as a member of the community, about the lives lost in the middle of a pandemic, and the lives that will be lost if people don’t have access to quality healthcare in their community”

The theme of inaccessibility was one that was echoed throughout the night — both during speeches and in conversations after the vigil.

A System for Profit

In April 2020, Alabama Governor Kay Ivey rejected the expansion of Medicaid claiming, “we all want high-quality medicine at an affordable cost available to everybody, but you’ve got to figure out how to pay for it,” — despite the federal governments offer to cover 90% of the costs, and a majority of Alabamians supporting its expansion.

Gov. Ivey went on, saying, “Right now, we’re focused on keeping everybody healthy and figuring out how we can get our people back to work.”

If the focus is to keep people healthy, there is a clear way to do that: Expand Medicaid now. Expanding medicaid could stop the 17 “vulnerable” hospitals from having to close, provide 28,500 new jobs, but above all it would provide quality healthcare to 300,000 working class people during a public health crisis.

However, the continued inaction of the government makes it painfully clear to hundreds of thousands of working class people that this system is not designed to keep people healthy — rather it is designed to maximize profit, even in times of great suffering.

Strengthening the Party’s position on healthcare

The Other Pandemic: Violence Against Healthcare Workers