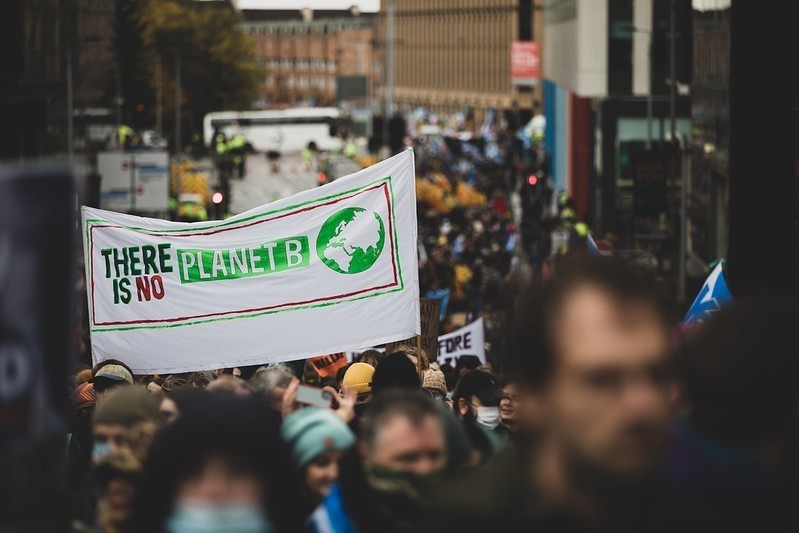 As the COP26 UN climate summit comes to a close, we are once again left with empty promises and a vague path forward to avert climate catastrophe. The corporate media is celebrating that for the first time in the 26 years of climate summits, the agreement coming out of Glasgow explicitly calls out fossil fuels as the cause of climate change. The bar couldn’t be lower.

Current emissions reduction pledges — which are non-binding and not enforced — have us on track for around 2.4 C warming over pre-industrial levels, which would be catastrophic. 1.5 C warming is the threshold that scientists warn must not be crossed if we are to retain a livable planet and stem mass extinction.

Despite the worsening climate crisis globally, this UN climate summit is once again a massive “greenwashing” event that in the end will achieve only minor emissions reductions, if any, and falls far short of what is needed for the continuity of life as we know it.

At the summit, President Biden committed to net zero emissions by 2050, while just days prior encouraged OPEC to pump more oil. And on the heels of the summit, the Biden administration is preparing for the largest oil and gas lease auction in U.S. history on Nov. 17, opening up more than 80 million acres of the Gulf of Mexico to drilling.

The recent “Production Gap” report from the UN Environmental Program released just prior to COP26 highlighted the disparity between global climate goals and plans for fossil fuel extraction. The report revealed that plans are in place for fossil fuel extraction through 2030 that would produce twice the amount of greenhouse gases than what is needed to keep below the 1.5 C threshold. Most oil and gas producers are planning to increase production through 2030 and beyond, the exact opposite of what is needed. U.S. oil and gas production is projected to increase by 12% to 17% by 2030 compared to 2019 levels. Globally, 20 top economies have invested more in fossil fuels than clean energy since the start of 2020.

The largest delegation at the climate summit — larger than any single country’s delegation — was that of paid lobbyists from the fossil fuel sector, flooding the summit with over 500 delegates. They outnumbered the combined delegates from the eight countries worst affected by climate change and were nearly double the number of the official Indigenous constituency.

With such a large participation from the very industry that continues to fuel climate change, it’s hard to take these summits seriously. This sentiment was echoed in the demands of the 100,000 protesters in the streets of Glasgow and through sister actions around the globe that called for uprooting the system to truly solve the crisis.

This criticism was expressed inside the summit by the socialist president of Bolivia Luis Arce:

“We view with frustration the enduring global framework that hasn’t finished defining a global solution to the climate crisis, which has become the principal problem we must face in defense of humanity and the life of Mother Earth. … We perceive that developed countries are simply buying time without any sense of responsibility for humanity. … Developed countries are promoting a new world recolonization process that we can call the ‘new carbon colonialism,’ because they are trying to impose their own rules of the game in the climate negotiations to continue feeding the new green capitalist system, while pushing developing nations to accept these rules of the game without any other options. … The solution to the climate crisis is not going to be achieved with more green capitalism and more global carbon markets. The solution is to change the model of civilization and move towards an alternative model to capitalism, the concept of living well together in harmony with Mother Earth.”

The U.S.-China joint declaration announced at COP26, while lacking specifics, aims to cooperate on emissions reductions through sharing of technologies, establishing new national targets and reviving a “multilateral” climate change working group. While global cooperation is key to solving the global crisis, it is unclear what this joint agreement will achieve in reality considering the constant demonization and U.S. war threats against China. The mainstream media consistently points the finger at China as the largest source of emissions globally — as if history began today — completely discounting historic contributions to the level of carbon in the atmosphere and the disparities in development between countries that are reflective in emissions levels today.

Progressives must view the challenges of climate change and responsibility within the historical context of colonialism and imperialism because formerly colonized countries, like China, are not at the same level of development as the Global North countries that have plundered the lands of other peoples for centuries, and so have more wealth, infrastructure and technologies at hand today to address the climate crisis.

So what did come out of COP26?

The eyes of the world were on U.S. commitments because the United States is responsible for the largest per capita emissions and the largest share of cumulative emissions since industrialization than any other country. And its position as #1 polluter doesn’t even account for the incalculable emissions from the U.S. war machine or consumption-based emissions — meaning all the emissions embedded in the products consumed within the United States that were produced outside its borders.

Here are the key facts to know:

What really needs to happen?

All of these things are possible if we uproot the system of capitalism. In recent month, Congress has been unable to pass even minor reforms that would have benefitted the working class and took the first steps to creating a renewable energy system. The transformations that need to happen for our survival will not be profitable and in the end spell the demise of powerful banks and corporations because they will literally serve no purpose in an ecologically sustainable society.

We may not find hope coming out of COP26, but there is hope in the demands of the people in the streets who see what is needed for our survival, who are calling for a new path forward, a new system. And that system is socialism, which puts the majority — the workers, scientists, ecologists, Indigenous leaders and the communities most impacted at the forefront. Under socialism, the transition to a sustainable world wouldn’t spell unemployment for fossil fuel workers and others. It would mean new opportunities and free job training in fields that help people and the planet, while implementing an iron-clad income guarantee. Millions of jobs at a living wage would be created to restore ecosystems, build the renewable energy infrastructure, shift to regenerative agriculture, and to retrofit and green our cities. There would be no lack of meaningful work. We all would have a role to play in healing our communities and planet.

But we must stop looking to our so-called leaders for that change. They are not our representatives, but instead represent the corporations and the very system that is responsible for climate change. We must organize in our communities, educate each other on the problems and solutions, and build a mass sustained people’s movement that uproots the system of rule by billionaires that is driving us to extinction.

The people have the knowledge and skills to reverse climate change and these changes are already happening on a small scale around the globe, but the economic system of capitalism acts as a barrier to the wide scale shift that is needed. Under socialism — where the workers have the power and control the resources — we can carry out the transformational change that’s so urgently needed.