Car caravan demands an end to the blockade on Cuba 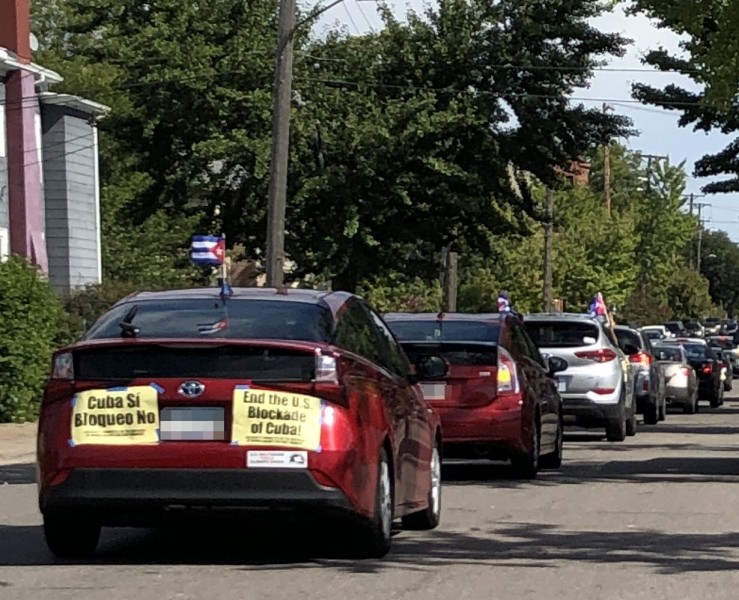 Minneapolis, MN – The Solidarity Committee on the Americas (SCOTA) and the Minnesota Cuba Committee held their second rally and car caravan, September 26, demanding the end to the blockade against Cuba. The protest was part of a growing movement which started in Miami and has spread to many cities across the country and around the world.

“We are here today to bring attention to the longest ongoing war against Cuba,” said SCOTA member Kim DeFranco. “Why does the U.S. still have a blockade against Cuba? There are no U.S. troops, ships, planes or bombs being sent to Cuba, so what gives? The U.S. has been at war with Cuba, either directly or indirectly, since Cuba gained independence in 1898. But especially after a failed attempt to invade Cuba, known as The Bay of Pigs Invasion in 1961.”

DeFranco rallied the crowd, “When Cuba is under attack, what do we do?” The crowd responded, “Stand up fight back!”

Jerris Heckler of SCOTA, greeted the people, “We welcome you to the Minnesota car caravan against the blockade on Cuba. We are part of an international and U.S. campaign to hold car caravans held on the last Sundays of each month. As we know, the blockade is a violation of international law, a criminal and inhumane policy to punish the Cuban people for their independence and sovereignty.”

An important reason why the blockade needs to end, Heckler explained, is that, “The country has developed three vaccines and three vaccine candidates, has fully vaccinated 37.8 million Cuban citizens and expects full vaccination of its population before the end of 2021. Additionally, Cuba has become the ‘vanguard in child vaccinations’ and is the first country in the world to undertake a massive vaccination campaign against COVID-19 for children ages two to 11, starting in the province of Cienfuegos. The island nation has vast experience and invention and production of vaccines for children and large-scale operation to carry out child vaccine campaigns.”

Cuba has a history of sharing its knowledge and medicines throughout the world, yet the U.S. thumbs its nose at this humanitarian gesture.

Sandi Sherman, member of the MN Cuba Committee, stated, “On September 7, President Joseph Biden extended the U.S. embargo of Cuba for another year under the Trading with the Enemy Act. This is no surprise, since every president, Democrat and Republican alike, has done the same since 1962. Biden, like his predecessors, views Cuba’s socialist revolution as the most serious challenge to U.S. imperialism in the world. Soon after working people in Cuba, led by Fidel Castro and the July 26 Movement, overthrew the U.S.-backed dictatorship of Fulgencio Batista in 1959, the U.S. government put their revolution in its gunsights.”

Senator Sandra Pappas is a Minnesota state senator since 1991 and has led trips to Cuba. She has authored and supported resolutions to end the blockade. During the COVID-19 pandemic, she authored resolutions to work collaboratively with Cuba and sent a “Dear Colleague Letter” to Governor Tim Walz to encourage the state to work with Cuba and their doctors.